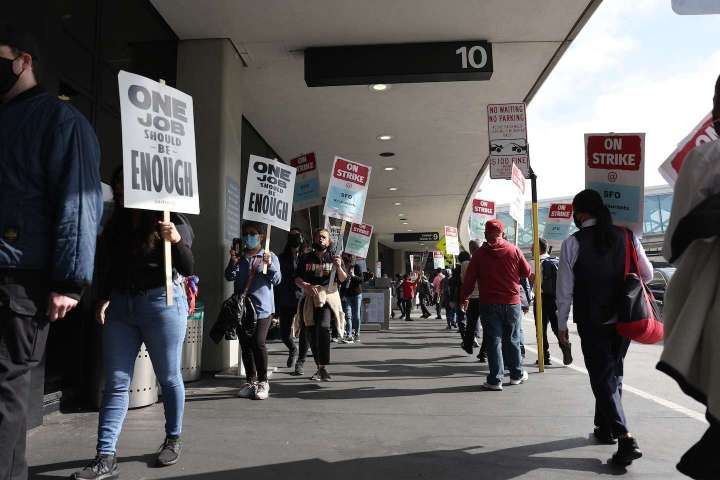 Cashiers, baristas, bartenders, cooks and lounge attendants at San Francisco International Airport launched an open-ended strike Monday over staffing levels and wages, shutting down most of one of the nation’s busiest airport’s food concessions.

Flights attendants at United and Southwest airlines on Tuesday are expected to demonstrate at 21 airports around the United States, including Guam, as well as in London, to draw attention to workplace problems made worse by understaffing.

Across the country, flight attendants and airport workers are responding to a hailstorm of workplace issues related to pay and staffing levels. Airline travel during the pandemic recovery has been marred by hundreds of thousands of canceled and delayed flights, attacks on flight attendants and widespread desperation among airport workers and travelers.

While neither the strike by airport concession workers nor the protests by flight attendants are expected to disrupt air travel this week, they’re the latest signs of upheaval in the nation’s transportation sector, coming just weeks after rail workers narrowly averted a strike fueled in large part by nationwide labor shortages.

In the airline industry, the airlines and air traffic controllers keep pointing at each other, to fend off blame for disruptions as demand for air travel has rebounded. Airlines in particular are struggling to attract workers in a red-hot labor market where less grueling jobs are easier to come by, and federal data shows that airlines are responsible for the high rate of cancellations. The air transportation industry is still down 54,000 workers compared to February 2020.

Lucinda To is among the 1,000 workers on strike at San Francisco International, where she has worked for 20 years. She prepares buffets, washes dishes and clears tables at restaurants and the United Club lounge for weary travelers. It is draining work that has only gotten harder this year, she said. With inflation at 40-year-highs, To said she has to work 60 hours a week at two separate food service jobs at the airport for $16.99 an hour to afford a two-bedroom unit in the Bay Area. Her mortgage is $2,800 a month.

“Right now, on my wage, I make so little that I couldn’t even buy one meal at this airport, where hamburgers are $22,” To said. “I need to work two jobs to support my family, and I’m always working double shifts.”

To, 61, regularly spends the night in her car at the airport, to save on gasoline and pass the time between shifts that stretch late into the night and start early the next day.

“The San Francisco International Airport advises travelers that a labor action by airport food workers is impacting staffing [at] restaurants and lounges,” said Doug Yankel, a spokesperson for the airport. “Some food and beverage outlets are closed, while others remain open with limited hours and offerings.”

Flights attendants for United and Southwest will demonstrate on Tuesday amid drawn-out contract negotiations over wages, staffing levels and rescheduling of workers when flights are delayed or canceled. The protests will happen outside airports in Chicago, Denver, San Francisco, Atlanta, Los Angeles, Washington and other cities.

At United, flight attendants said their lives have been upended by cancellations and delays, which routinely force them to spend hours, unpaid, waiting on the phone with the airline’s scheduling services. Some attendants slept on cots in airports this summer because hotels were overbooked.

The workers said the delays are caused by understaffing within the scheduling division.

Scott Pejas, a United flight attendant in Chicago and president of his local chapter of the Association of Flight Attendants, said disruptions to schedules have become the norm for flight attendants.

Joshua Freed, a spokesperson for United, said the company is eager to reach a contract agreement with the union to address flight attendants’ concerns.

“We’ve worked hard to reduce wait times for flight attendants to talk to a crew scheduler, including more hiring and adding digital options for some items,” he added.

Lynn Montgomery, the president of TWU Local 556, which represents 18,000 Southwest flight attendants nationwide, said flight disruptions have become so routine that “workers are constantly working outside their normal schedule.”

“I’ve never seen flight attendants so disheartened,” said Montgomery, who has also worked as a Southwest flight attendant for 30 years. “They feel like they’ve given and given, and the company isn’t giving back to them. It’s way more investor-focused these days than employee-friendly.”

A spokesperson for Southwest said the airline encouraged employees to express their opinions.

“Informational picketing is common during contract negotiations, and we do not anticipate any disruption in service resulting from the demonstration planned by off-duty flight attendants,” the spokesperson said.