What to know from NFL Week 3: The AFC isn’t living up to the hype 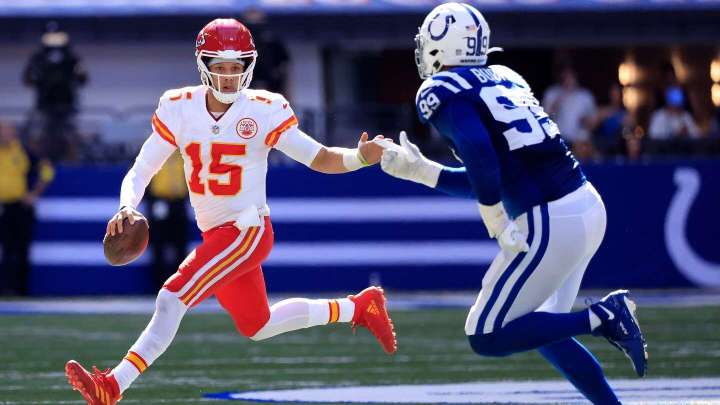 In Week 3, weirdness reigned. Teams led by Aaron Rodgers and Tom Brady combined for 26 points. The Bills ran 51 more plays than the Dolphins, whose punter booted one off a teammate’s butt, and lost. The Chiefs recorded a win-sealing sack, only to have it rescinded for naughty language before they went on to lose. The Jaguars played like the league’s most dominant team. The final three unbeatens are the Dolphins, Giants and Eagles — two teams that missed the playoffs and the NFC’s seventh seed last year. To cap it off, Sunday night delivered the second 11-10 game in NFL history.

It’s getting odd out there, and here is what to know:

The AFC might not be as good as we thought. Wasn’t the AFC supposed to be a Goliath, loaded with the best quarterbacks, ascendant contenders and juggernaut teams? There’s still time for the conference to assert itself, but so far imbalance has not been the storyline it was expected to be.

The Bills and Chiefs may still be head and shoulders above the rest of the league, but they both lost Sunday, and Buffalo’s injuries on defense, especially the season-long loss of safety Micah Hyde, could make them vulnerable. The Chargers and Bengals, both expected to ride young quarterbacks to the league’s elite, are 1-2. The coaching infrastructure of the Steelers and Patriots has been no match for a jarring lack of talent. Davante Adams hasn’t helped the Raiders avoid the only 0-3 start in the NFL. Lamar Jackson remains incredible, but the Ravens’ defense is injured and leaky. Russell Wilson looked average until Denver’s game-winning drive Sunday night, a spasm of his old elusiveness. The AFC is 4-6 in interconference games.

Black Out: The Post’s investigation into how the NFL blocks Black coaches

The Dolphins can win ugly, too. Last week, the Dolphins relied on pyrotechnics in their wild comeback against the Ravens. On Sunday, they leaned on grit.

Their punter booted a ball off his teammate’s backside and out of the end zone late in the fourth quarter. They compiled 212 total yards. Tua Tagovailoa staggered off the field with a “head injury” (and returned curiously soon after halftime). The Bills ran 90 plays to their 39.

The Dolphins still held on, 21-19, after Isaiah McKenzie couldn’t get out of bounds and the Bills were a few seconds too late to line up and clock the ball. Buffalo settled for a field goal after a 20-play drive and turned the ball over on downs on the 17th play of another. If you’re wondering how frustrating the Dolphins are to play, ask Bills offensive coordinator Ken Dorsey.

The Dolphins haven’t been an elite team for a long time, so the home-field advantage that the South Florida humidity can provide hasn’t been an essential factor in an NFL season. It could be this year. The Bills, on short rest after playing Monday night and already depleted in the secondary and offensive line, had players dropping like flies.

Coach Mike McDaniel, 3-0 to start his career with wins over Bill Belichick, John Harbaugh and Sean McDermott, is an early leader for coach of the year honors. He has Tagovailoa playing with more poise and confidence, and the Dolphins’ defense hasn’t lost the aggression and discipline that former coach Brian Flores instilled.

One key Sunday: The Dolphins weren’t afraid to blitz Josh Allen. Entering the game, Allen was averaging 9.5 yards per attempt against the blitz, with a 133.7 passer rating, fifth best in the NFL. Miami still sent extra pass rushers at him. Sometimes it burned the Dolphins — both of Buffalo’s touchdowns came against the blitz. But it also led to the strip sack that set up Miami’s first touchdown.

Brandon Staley is taking on water. The Chargers were a chic Super Bowl pick, and three weeks into the season, they are a 1-2, injured, disjointed mess. The visiting Jaguars annihilated them, 38-10, as quarterback Justin Herbert played through fractured rib cartilage.

Injuries have been a major factor — Herbert is banged-up, and the Chargers lost pass rusher Joey Bosa and star left tackle Rashawn Slater during their defeat. But the way the Jaguars dismantled them exposed more troubling issues.

Supposedly at the cutting edge of defensive football, Staley coaches a team that yields points by the bushel. Going back to last season, the Chargers have surrendered at least 34 points in four of seven games. For Staley’s supposed leaps in playing a two-high shell, the Chargers blow simple plays. On fourth and one, the Jaguars found a flaw in how the Chargers plugged gaps, and James Robinson burst through a giant hole for a 50-yard touchdown.

Staley drew heat last season for his extreme aggression on fourth down. But data supported those calls, and they were marginal at worst. His decision-making has been bizarre in other ways this season. With less than five minutes left Sunday, down by 28, Staley kept Herbert in the game despite his battered ribs, inviting unnecessary risk to one of the most valuable players in the league.

Staley and Joe Lombardi, his handpicked offensive coordinator, are not getting the most out of Herbert, either. He has one of the strongest arms in the NFL, yet he entered Sunday averaging 6.5 yards per target, which ranked 33rd in the NFL. Once they get healthy, the Chargers will have as much talent as any team in the league. They need their coach to stop holding them back.

The Eagles might be a powerhouse, and Jalen Hurts might be elite. It would be an overreaction to crown the Eagles and Hurts after three weeks, but this is how seasons for No. 1 seeds and MVP candidates start. Philadelphia is bullying opponents, and the ever-improving Hurts has been the most productive quarterback in the NFL.

Hurts uses arm, not legs, to dice up the Commanders

The Eagles thrashed Washington, 24-8, on Sunday, taking a 24-0 lead into the fourth quarter. Their pass rush, even while rarely blitzing, controlled the game. The Eagles destroyed the Vikings last Monday night, holding them to seven points as cornerback Darius Slay silenced star wide receiver Justin Jefferson. Though the Lions made it close in Week 1, the Eagles have led by at least 17 points in all three of their games. They are not just undefeated. They are dominant.

And they have a quarterback who increasingly looks like one of the best in the league. In three games, Hurts has proved himself a different level of passer than he was last season. He has thrown for 916 yards and four touchdowns, passing for more than 300 yards the past two. He leaned Sunday on former Heisman Trophy winner DeVonta Smith, who had the best game of his career with eight catches for 169 yards and a touchdown.

The 49ers’ offense is a mess. San Francisco’s defense forced eight three-and-outs in Denver, and its offense squandered that excellence, sometimes in slapstick fashion. Jimmy Garoppolo backed out of the end zone for a safety while avoiding a pass rush, and that wasn’t even his worst moment of the 49ers’ 11-10 loss. As the 49ers were driving for a possible go-ahead field goal, he forced a pass into triple coverage around Deebo Samuel for an interception. He was skittish in the pocket and inaccurate.

The 49ers under Kyle Shanahan can typically lean on their running game, but with their top two running backs injured, it never got started. The worst news for the 49ers came when left tackle Trent Williams limped into the locker room after a defensive lineman rolled into his knee. The 1-2 49ers’ Monday night showdown with the Rams is looking far more pivotal than they would have preferred.

Tom Brady needs his receivers back, and Aaron Rodgers might be finding one. Defense dominated the Packers’ 14-12 victory over the Buccaneers, which is a familiar story for Brady. The Bucs have scored three offensive touchdowns all season. Brady requires precision from his receivers, and his expected targets have been unavailable. Julio Jones and Chris Godwin are out with injuries, and Mike Evans missed Sunday’s game after receiving a suspension for his fight with Saints cornerback Marshon Lattimore. The 45-year-old version of Brady has looked like all the others, but he needs more help than he’s getting.

Rodgers seems to be adjusting to life without Davante Adams. Rookie Romeo Doubs, a training camp sensation, broke out Sunday with eight catches for 73 yards and a touchdown. Nobody expects Doubs, a fourth-round pick from Nevada, to replace Adams. But if Rodgers is developing trust in him, it will be a massive development for the Packers.

The Chiefs blew it in so many ways. There’s a lot of season left and crazy things happen every week, but there may not be a stupider loss all year than the Chiefs’ 20-17 defeat in Indianapolis. They had so many chances to control or seal the game, and they squandered all of them. It wasn’t a loss that revealed something deficient within the Chiefs, but it was a loss that will sting if they fall a game short of a bye or home-field advantage.

Start at the end. With about five minutes left, a trio of defenders, lineman Chris Jones included, converged on Matt Ryan and sacked him to set up fourth and 14 on the Colts 31. The Chiefs led 17-13 and would receive a punt with the chance to exhaust the clock or score game-sealing points.

Suddenly, a flag: Jones was called for unsportsmanlike conduct for what referee Shawn Smith later called “abusive language toward an opponent.” It was a bizarre moment for a rarely seen call, but Jones blamed himself and apologized to his team. “It was definitely my fault,” he told reporters.

The call enabled a winning touchdown drive, but the Chiefs botched the game at several other moments. They ran a hopeless fake field goal that failed, and kicker Matt Ammendola later missed a 34-yard attempt. After the Colts’ opening drive, rookie Skyy Moore dropped a punt at the 10-yard line, which led directly to a 7-0 deficit. The Chiefs didn’t even try to score at the end of the first half from their own 36 with 30 seconds left, which led to an animated on-field discussion between Patrick Mahomes and offensive coordinator Eric Bieniemy. Tight end Travis Kelce dropped a touchdown pass in the back of the end zone that would have made it an 11-point game in the fourth quarter. It will be a miserable week in Kansas City.

It’s getting worse for the Patriots. There’s no shame in losing to the Ravens or allowing five touchdowns to Jackson, who is somehow getting both better and more underrated at the same time. But it was still a very bad Sunday in New England.

The Patriots’ 37-26 home loss ended with their quarterback screaming in pain as he was carried off the field. As Mac Jones threw an interception on his final snap, a defender collapsed on his left ankle. He hopped off on one leg. Given appearances, the Patriots should fear an extended absence with a badly sprained ankle. Brian Hoyer or rookie Bailey Zappe are likely to be tasked with turning around a 1-2 team with a newly installed offense.