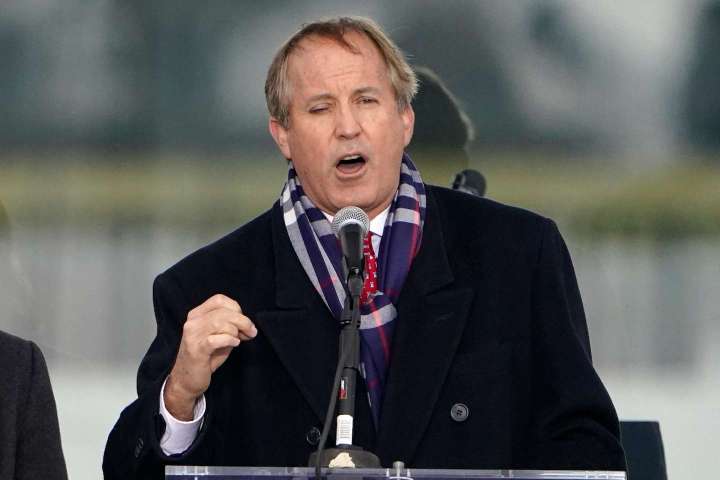 Ernesto Herrera is a process server in the state of Texas. On Monday morning, he went to the house of Texas Attorney General Ken Paxton (R) to serve him two subpoenas commanding Paxton to appear in court the following day to offer testimony in relation to a lawsuit filed by abortion rights groups in the state.

According to a statement, Herrera arrived at Paxton’s house about 8:30 a.m. He knocked and spoke with Paxton’s wife, who said the attorney general was on the phone. Herrera then waited outside. Nearly an hour later, an SUV arrived at the house. When Paxton emerged to get inside, Herrera approached him. Paxton quickly (Herrera says he ran) went back into the house. Ten minutes later, Paxton’s wife, state Sen. Angela Paxton (R), opens the doors to the truck and Paxton hurried (again: “ran”) to get inside. Herrera says he identified himself and served the papers by leaving them near the vehicle.

After the Texas Tribune reported on the events Monday evening, Paxton lashed out on Twitter. The media, he said, was “attacking me for having the audacity to avoid a stranger lingering outside my home and showing concern about the safety and well-being of my family.”

Paxton’s tweet, unlike Herrera’s statement, was not offered under oath. What’s more, there’s no indication that Paxton alerted law enforcement after Herrera’s arrival, suggesting that his safety concerns were perhaps not all that robust in the moment. By all appearances, this was what it looked like: Texas’s chief legal official skirting a lawfully submitted subpoena.

Not really surprising, though, given Paxton’s history of leveraging the law for political ends.

Sign up for How To Read This Chart, a weekly data newsletter from Philip Bump

We can begin in 2014, the year Paxton first won election as attorney general. Even before he secured the Republican nomination, questions arose about whether he’d broken the law in work he had done for a financial services firm. He was indicted on three felony charges the next year — after having been seated as attorney general — and pleaded not guilty.

Those charges are pending. Seven years later, there has been no trial. He was narrowly reelected in 2018.

In 2020, Paxton was accused of bribery and abuse of office by seven people on his staff. All seven were fired, put on leave or resigned soon after. The FBI is reportedly investigating the allegations, though he was cleared of wrongdoing … by his own office.

Meanwhile, Paxton, who is up for reelection this year, has often used his position to advocate partisan positions and arguments. He filed a motion aimed at forcing the White House to continue construction of a wall on the border with Mexico. His office announced that some medical care for transgender youths amounted to “child abuse.” He touted an obviously specious claim about rampant illegal voter registrations that the Texas secretary of state soon had to counter.

But that was in keeping with his energetic effort to use the power of his position on behalf of Donald Trump. Paxton made Texas the lead plaintiff in a post-election lawsuit filed in 2020 aimed at overturning the results of the presidential contest in a number of swing states. The lawsuit was dubious in broad strokes and ridiculous in its specific claims of voter fraud. Despite Trump’s centering it as essential and important, the suit, reportedly drafted by lawyers close to the Trump White House, was thrown out by the Supreme Court.

That advocacy on Trump’s behalf probably helped earn Paxton a speaking spot at Trump’s rally outside the White House on Jan. 6, 2021.

“We’re here. We will not quit fighting,” he told the crowd — some of whom then took the fight to the U.S. Capitol. After the violence, though, Paxton claimed on social media that the rioters were “not Trump supporters.” The Texas state bar later sued Paxton for alleged violations of ethical standards over his efforts to reverse the election results. In response, Paxton blocked attorneys in his office from participating in state bar events.

The attorney general’s embrace of voter fraud conspiracy theories didn’t end with his failed efforts to boost Trump, however. Earlier this year, he hosted a showing of Dinesh D’Souza’s film “2000 Mules,” a movie he called “very compelling.” Documents provided to The Washington Post by the Lone Star Project (obtained under the Texas Public Information Act) show that Paxton’s office encouraged officials to attend the screening.

That the film had already been broadly debunked by the time of the invitation appears not to have influenced the suggestion that the election integrity team attend. “#VoterFraud is real & we must join together to stop it!” Paxton tweeted after the event — a reminder that the point was to show allegiance to the right’s position on election security far more than to bolster “election integrity.”

Earlier this year, Paxton again won the Republican Party’s nomination to serve as state attorney general — albeit only after he was the only Trump-endorsed incumbent forced into a runoff. Given the politics of the state and of the midterm elections, it’s likely that he’ll win reelection for a second time.

Perhaps by the end of a third term, his 2015 indictment will have been resolved. Although who knows what other legal quagmires might arise in the interim.