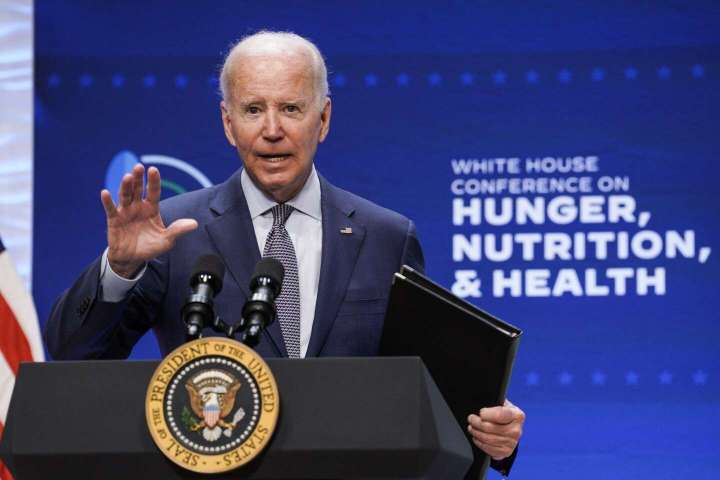 President Biden on Wednesday hosted the first White House summit in nearly a half-century dedicated to combating hunger, with administration officials announcing they had secured $8 billion in public- and private-sector commitments toward helping provide more food and better nutrition by 2030.

“This goal is within our reach — just look at how far we’ve come on child poverty,” Biden said during a morning session.

Some 500 people, as well as 1,000 others virtually, attended various panels and brainstorming sessions during the day-long conference.

The White House on Tuesday released a 44-page report summarizing policies that were to be discussed in depth during the conference. The goal is to make healthy food more affordable and accessible and to invest in expanding physical activity options and enhancing research on food and nutrition.

The president suggested the government, along with the corporate world, could play a bigger role in making nutritious food available in places that suffer from a lack of it.

“First, help more Americans access the food that will keep their families nourished and healthy — a lot of food deserts out there,” Biden said. “Second, give folks the option and information they need to make healthy dietary choices. Thirdly, help more Americans be physically active.”

A number of these goals, however, may prove difficult without congressional action or outside assistance.

The $8 billion in funding is one of the more tangible aspects of the administration’s plan. Officials said that they have secured the pledges from more than 100 organizations, ranging from hospitals to restaurants, and that they will use the money to fund a wide variety of initiatives.

At least $2.5 billion will be invested in start-up companies attempting to come up with new solutions to hunger and food insecurity, according to the officials. More than $4 billion comes in the form of donations aimed at improving access to nutritious food, promoting healthy choices and increasing physical activity.

President Richard M. Nixon was the first to convene a White House conference on hunger in 1969, and some other administrations have sought to make it a priority in their own ways.

First lady Michelle Obama spearheaded the “Let’s Move” campaign to raise awareness about childhood obesity, though her initiative had mixed results and attracted criticism from the right.

“I want all of us to take a moment to recognize the significance of what we are about to do,” Biden said. “Something like this hasn’t happened in more than 50 years. Let’s keep the momentum of today going in a new and meaningful, strong way so that we can fully meet this important moment for our children, for our community and for our country.”

The economic shocks of the covid-19 pandemic helped push the number of hungry people in the world to its highest level since the mid-2000s, experts say — as many as 828 million individuals.

The Agriculture Department estimates that 10.2 percent of U.S. households, or 13.5 million, were “food insecure” at some point during 2021, meaning they lacked enough food to meet the needs of all their members.

Biden, a practicing Catholic, cited church teachings and sayings on the subject on Wednesday.

“If you look at your child and you can’t feed your child, what the hell else matters?” he said, adding, “In America, no child should go to bed hungry. No parent should die of disease that can be prevented.”

While a number of the proposals would require congressional support, administration officials say Biden can make some short-term moves through executive action. Those include updating school nutrition standards, developing a front-of-package labeling system and expanding screening for food insecurity in the federal health-care system.

“We are not waiting to take action here but are planning to take steps in the immediate future,” said an administration official, speaking on the condition of anonymity to preview plans ahead of the conference.

Administration officials say they hope the program will continue to expand with more funding commitments from other organizations. Still, it is unclear how strong a mechanism the federal government has to ensure the groups follow through with their pledges.

“We’ll continue to be working with the CDC Foundation to ensure that these partners execute on the actions that they’ve committed to,” the official said. “This will be ongoing work, but we certainly recognize that this is a priority and fully expect these companies to execute on what they say they’ll do.”

The CDC Foundation is a nonprofit group created by Congress that helps mobilize private resources to support the work of the Centers for Disease Control and Prevention.

Andrew Jeong and Eugene Scott contributed to this report.