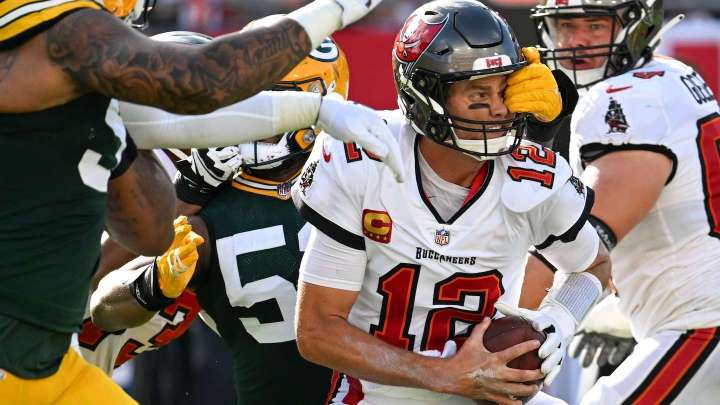 NFL defenses are making a comeback, albeit somewhat modestly and perhaps temporarily.

When quarterbacking legends Tom Brady and Aaron Rodgers got together Sunday in Tampa, they produced a tense game that came down to a failed two-point conversion attempt by Brady and the Tampa Bay Buccaneers with 14 seconds remaining. But it wasn’t, say, a 37-35 loss to Rodgers’s Green Bay Packers. It was Packers 14, Bucs 12.

Then, Sunday night in Denver, the Broncos beat the San Francisco 49ers, 11-10.

In a golden age for quarterbacks, with dazzling passing numbers and scoring totals, defenses suddenly are taking a stand.

Scoring is down in the early stages of this season, to an average of 42.1 combined points per game from 47.1 last season through Week 3. There also has been a dip in passing yards per game, to 462.1 this season from 490 through three weeks last season.

But the league and the rulemaking competition committee track the scoring figure closely, on the premise that wide-open and high-scoring games are good for fan interest. NFL defensive players constantly bemoan — with plenty of justification — the advantages rule changes and interpretations give to offensive players. Even this season, illegal contact by defensive backs on receivers is a point of clarification (formerly called a point of emphasis) for NFL game officials.

The drops in passing and scoring are not attributable to inexperienced quarterbacks; no team entered this season with a rookie as its starter. But there was plenty of quarterback reshuffling in the offseason, leading to a learning curve for some veterans in new spots. Coaches, meanwhile, have become increasingly wary of playing their starting quarterbacks and other key players in preseason games, making the early weeks of the regular season more akin to a modern-day preseason. Offenses must play their way into peak precision and efficiency.

League leaders and competition committee members seem to be taking a wait-and-see approach; they traditionally resist drawing conclusions from small sample sizes. But the points-per-game figure is certainly worth monitoring as the season progresses.

On Tuesday, the Buccaneers moved their operations to South Florida because of the threat of Hurricane Ian, and they plan to practice this week at the Dolphins’ facility. (The Dolphins play Thursday night at Cincinnati.) The Buccaneers are scheduled to play the Kansas City Chiefs on Sunday night in Tampa.

The game, for now, remains unchanged. But the teams and the league are considering contingencies and are expected to make a decision — perhaps as late as Friday — about potentially rescheduling or relocating the game. The NFL and the Buccaneers seemingly would prefer to keep the game in Tampa, even if that means playing on a different day, based on conditions in the area.

If the game cannot be played in Tampa, it probably wouldn’t be moved elsewhere in Florida, with resources throughout the state being devoted to hurricane-related efforts. The available NFL sites include Minneapolis and New Orleans, with the Vikings and Saints facing off Sunday in London.

The New England Patriots probably will have to turn to Brian Hoyer, their veteran backup quarterback, or rookie Bailey Zappe this week as they attempt to keep their season from unraveling.

Starter Mac Jones is believed to have suffered a high ankle sprain late in Sunday’s loss to the Baltimore Ravens. It’s not clear exactly how long Jones will be sidelined, but he will probably miss multiple games.

The Patriots take a 1-2 record into Sunday’s game at Green Bay as they attempt to keep the Dolphins and Bills from leaving them behind in the AFC East race. There have been early-season questions as to whether Jones is failing to make progress in his second NFL season amid the murky play-calling situation that exists for the Patriots following the offseason departure of offensive coordinator Josh McDaniels. Now those questions are on hold.

Hoyer last made an NFL start in 2020 for the Patriots. He last orchestrated a victory as an NFL starter in 2016 with the Chicago Bears.

“Brian’s got a lot of experience in the offense,” Coach Bill Belichick said at his news conference Monday.

Belichick was equally brief in his praise of Zappe, a fourth-round draft choice from Western Kentucky.

The Patriots have to hope they have the same save-the-season success with a backup quarterback that the Dallas Cowboys and Cleveland Browns are experiencing.

The situation seemed dire for the Cowboys when they began the season with a listless loss at Tampa Bay and quarterback Dak Prescott suffered a fractured right thumb that required surgery. Enter Cooper Rush, who had made only one start over four NFL seasons. He has engineered two straight victories, including Monday night’s 23-16 triumph over the New York Giants at the Meadowlands.

“He’s certainly playing as well as anybody could have expected. … There’s no question he understands this offense,” Cowboys owner Jerry Jones said Tuesday in his weekly radio appearance on 105.3 the Fan. “He has got the makeup for a top quarterback. … We’re very fortunate.”

Prescott is said to be healing well and had the stitches removed from his thumb Monday. There is speculation that he might play Sunday against the Washington Commanders. More likely, he’ll miss that game but perhaps return the following weekend against the Los Angeles Rams in Inglewood, Calif., or Oct. 16 at Philadelphia. Never mind Jones’s previous talk about welcoming a potential quarterback dilemma if Rush played well. This is Prescott’s team and Prescott’s job. But Rush’s play has been an unexpected salvation for the Cowboys.

The Browns, meanwhile, are 2-1 with Jacoby Brissett starting while Deshaun Watson serves his 11-game suspension. Brissett threw two touchdown passes in Thursday night’s 29-17 win over the Pittsburgh Steelers. It’s a long time until Watson is eligible to play Dec. 4 at Houston. But for now, Brissett is keeping the Browns competitive.

It didn’t go as well for the 49ers in Jimmy Garoppolo’s first start since Trey Lance’s season-ending ankle injury. He threw an interception as the offense sputtered in Denver. He also handed the Broncos a safety by inadvertently stepping out of the back of the end zone. That led former NFL quarterback Dan Orlovsky, now an analyst for ESPN, to express his sense of vindication on Twitter after his infamous running-out-of-bounds blunder in 2008 while with the Detroit Lions.

A top priority for NFL team owners as their regularly scheduled October meeting nears is to resolve their dispute over payment of the $790 million settlement reached last year with St. Louis in the city’s lawsuit over the Rams’ relocation to Los Angeles in 2016.

The owners regard that as their most pressing issue, according to a person familiar with the league’s inner workings.

Rams owner Stan Kroenke was required to sign an indemnification agreement as part of the relocation. But Kroenke reportedly contends that he should not be responsible for paying the entire amount, drawing a distinction between legal fees and settlement costs while maintaining that information derived from other NFL franchises bolstered St. Louis’s lawsuit.

The owners discussed the matter at previous league meetings this year but have been unable to reach an agreement. They’re scheduled to meet again on Oct. 18 and 19 in New York.