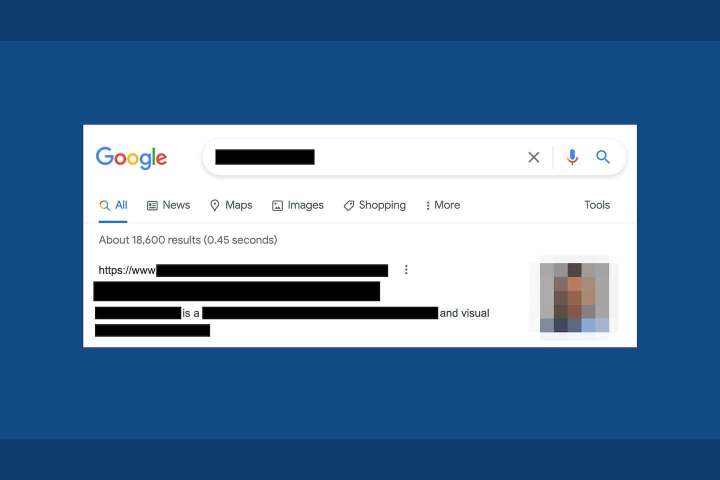 From a simple Google search, strangers can dig up your phone number, physical address or other personal information. You might not want that floating around the internet — or its presence could be putting you in danger.

Now, Google says it’s making it easier to request that information be removed from search results. A new shortcut, which Google teased in May, is rolling out in its app and next to search results in the United States during the next two weeks. Before, you could request the removal of that type of information through this form.

The change comes as concerns intensify about the connection between online privacy and real-life safety. This month, stalker forum Kiwi Farms was taken down after forum members spent years harassing women and those who identify as LGBTQ, frequently posting their physical addresses and phone numbers. Victims of domestic abuse are also at risk when their personal information appears online. Some jurisdictions, including the European Union, have adopted a “right to be forgotten,” which grants people the right to ask for their personal information to be deleted from company databases or the internet, but the United States hasn’t adopted such a law.

In addition to requesting the removal of search results, starting early next year people can sign up for alerts if their personal information appears in new results, Google says.

“Even though removing these results doesn’t scrub your contact information from the web overall, we’re doing everything we can to safeguard your information on Google Search,” Danny Sullivan, Google’s public liaison for search, said in a statement.

Here’s how to ask for a result to be removed: In the Google app or Chrome browser, tap or click on the three dots next to a search result. A window titled “about this result” should pop up. Scroll to the bottom and select the “remove result” button. After you fill out a removal form, your request will take a few days to process, Google says. You can check the status by tapping on your profile icon in the top right corner and selecting “results about you.”

Mass data collection by companies and the government has made it increasingly difficult for targets of harassment or abuse to keep their personal information off the internet, says Alejandra Caraballo, an instructor at the Harvard Law School Cyberlaw Clinic. Even if people remove their personal information from search results, it’s still probably available for purchase from data brokers, companies that amass and sell huge amounts of personal data.

“This [Google tool] is still kind of in the early stages, and it remains to be seen how effective it is,” said Caraballo. “A lot of this information is still available through data brokers, and that kind of freewheeling sharing of people’s personal information in bulk is something that needs to be looked at by federal regulators.”

Scrubbing your information from data broker sites requires either time to submit dozens of data deletion requests or money to pay a third-party service such as DeleteMe to do it for you. So while Google’s new tool won’t solve online stalking, it gives people a valuable free tool, said Nina Jankowicz, vice president at the anti-disinformation Centre for Information Resilience.

Scams are showing up at the top of online searches

Not all anti-harassment advocates are celebrating the tool’s design. Coraline Ehmke, an open source software developer, questioned Google’s approach. Why does the burden of protecting against online harassment almost always fall to individuals, she asked. How will Google determine the validity of takedown requests? And why must users be signed into a Google account to use the “results about you” feature? Given Google’s sprawling ad business, Ehmke said she’d think twice before turning over more of her personal information to submit a removal request.

“What do we have to opt into in order to opt out?” she said. “It feels like privacy after the fact.”

“ ‘Results about you’ [The feature] uses both technological enhancements as well as human review to prevent abuse of the removals process,” Google spokesman Ned Adriance said. Google won’t share the information users put in a removal request and won’t use it to “personalize your experience,” he noted.

The new tool won’t delete your phone number and address from the internet, but it’s a step in the right direction for privacy, according to Jankowicz.

“In the information environment that we’re in, it’s incumbent on all of us to be a little bit proactive in managing our online presence,” she said. “It’s a great thing that Google is putting this out there, especially for people who are frequent victims of abuse, harassment or stalking.”

If the tool hasn’t appeared for you yet or you’re trying to remove other types of information such as financial information or medical records, go to this Google form. You can also ask Google to remove explicit photos that are fake, posted without your consent or showing up alongside your name without reason.

The busy person’s guide to saving money on holiday shopping