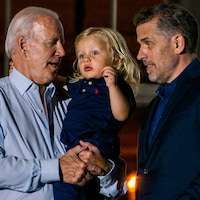 As House Republicans prepare to launch an onslaught of oversight investigations next year, the White House is planning to distinguish between inquiries they deem legitimate and others they view as politically, not legislatively, motivated — with an eye toward minimizing their cooperation with probes they consider improper, according to two people familiar with the plans.

White House officials caution that their decisions about cooperation will ultimately hinge on the nature of the investigations, but their preparations, which have been underway for months, hinge on such a split strategy. The White House is likely to respond to requests for documents and testimony relating to the U.S. withdrawal from Afghanistan, for example, but far less likely to engage with Republicans’ investigations into Hunter Biden, the president’s son, the people said, speaking on the condition of anonymity to discuss private deliberations.

Republicans, who won the House majority in the midterm elections, have signaled an aggressive oversight campaign despite capturing fewer seats than either party expected. They have made it clear that among their top investigative targets, in addition to Afghanistan, will be the origins of the coronavirus pandemic and other China-related issues, the disbursement of pandemic relief funds, border security and Biden’s energy policies.

But the likely flash point will be their determination to investigate Hunter Biden, whom they accuse of financial wrongdoing and trading on the family name. The president, who has lost two other children, is highly protective of his son, who has a long history of drug use and other difficulties.

On Tuesday, Rep. Kevin McCarthy, (R-Calif.), the leading candidate to become speaker of the House, called for Homeland Security Secretary Alejandro Mayorkas to resign, saying that if he does not, Republicans “will investigate every order, every action and every failure to determine whether we can begin impeachment inquiries.”

It is unclear what impeachment charges GOP lawmakers could bring against Mayorkas, and the Democratic-led Senate would be unlikely to pursue them in any case. But conservative activists have pushed for such action, saying the administration has failed in its duty to protect the American border.

Last week, Rep. Jim Jordan (R-Ohio), who is in line to chair the House Judiciary Committee, and Rep. James Comer (R-Ky.), who is expected to head the Oversight Committee, held a news conference laying out their plans to investigate Hunter Biden’s business dealings. Apparently seeking to preempt White House arguments that Hunter Biden is a private citizen, Comer stressed that the GOP’s target is any involvement by President Biden himself.

Former president Donald Trump and other Republicans have long focused on the president’s son, especially what appear to be records from his personal laptop, as a symbol of what they claim is nefarious activity by the Biden family. No evidence has emerged that the president was improperly involved in his son’s activities.

The prospect of a White House choosing which elements of congressional oversight it will respect strikes some experts as questionable. Stanley Brand, who served as general counsel to the House of Representatives under then-Speaker Tip O’Neill (D-Mass.), cautioned that such a strategy is legally dubious, given Congress’s constitutional role of overseeing the executive branch.

“It may be politically coherent; I don’t know that it’s legally coherent,” Brand said. “They can find themselves backed into a corner on that. Despite how they divide them, the committees, if they are aggressive, are not going to accept that difference.”

Biden’s allies respond that the Republicans’ dogged pursuit of Biden’s son is clearly political, and that GOP leaders showed no scruples as Trump routinely ignored congressional oversight. More recently, Democrats say, Republicans have attacked the House committee investigating the Jan. 6, 2021, attack on the U.S. Capitol and refused to participate in its work.

Fact check: GOP claims on Hunter Biden and his father

What is clear is that a central part of the House GOP’s agenda will be investigating Biden. And the White House has long been preparing.

Biden’s aides created an internal team months ago to respond to congressional oversight so that other staffers can stay focused on daily White House functions. Richard Sauber, a longtime defense lawyer who previously served as the top lawyer at the Department of Veterans Affairs, has joined the White House as special counsel focusing on oversight, and Ian Sams, a former spokesman for Vice President Harris’s presidential campaign, is leading communication efforts. Aides said they expect the team to grow in coming weeks.

Beginning in the summer, the White House urged federal agencies to strengthen their oversight response process and to consider bringing on senior staffers to handle potential investigations. White House lawyers have met with the senior teams of Cabinet officials, such as Mayorkas, to help them prepare their defense ahead of potential impeachment investigations.

A team of communications, legislative and legal staffers at the White House worked over the summer to map out GOP investigative plans, closely monitoring Republicans’ public statements and their letters to administration officials. Jordan recently sent letters to Attorney General Merrick Garland and Education Secretary Miguel Cardona, for example, asking for “voluntary compliance” with the Judiciary Committee’s oversight.

Jordan’s plans to investigate the Justice Department and the FBI could be highly volatile, as the accusation that the department has become politicized will probably clash with concerns about interfering with neutral law enforcement activities.

In August, after the FBI searched Trump’s Mar-a-Lago home for classified documents, McCarthy issued a statement warning that Garland would be summoned to testify, saying, “Attorney General Garland, preserve your documents and clear your calendar.”

In general, the White House is responding to the expected onslaught by saying Republicans are engaging in the very conspiracy-minded sideshows that voters rejected in the midterm elections.

“Instead of working with President Biden to address issues important to the American people, like lower costs, congressional Republicans’ top priority is to go after President Biden with politically-motivated attacks chock full of long-debunked conspiracy theories,” Sams said in a statement.

Biden himself contends that voters want their leaders to focus on solving problems, not digging into conspiratorial storylines. “‘Lots of luck in your senior year,’ as my coach used to say,” Biden told reporters the day after the midterm elections, when asked about the Republican plans for investigations. “Look, I think the American public want us to move on and get things done for them.”

Republicans respond that the administration has been protected by two years of Democratic control of Congress and scrutiny is long overdue.

“There are all kinds of questions that need to be answered, and we’re determined to get there,” Jordan said, adding: “We’re committed to getting to the truth, the facts. That’s what we think the American people are entitled to.”

Despite the brewing collision, the White House’s intent to engage with Republicans on many oversight requests, providing witnesses and documents, marks a shift from the Trump White House, which blocked Democrats’ investigative efforts at nearly every turn.

Former congressman Henry Waxman (D-Calif.), who chaired the House Oversight Committee and led a series of aggressive investigations, said the White House should be guided by the nature of the Republican requests and respond to reasonable inquiries.

“I would hope the Republicans would limit their investigations to something legislatively appropriate and not political grandstanding, but I would doubt that based on their past record,” Waxman said. “But if there is any serious effort to do legitimate oversight, I would expect the White House to cooperate.”

Some lawyers said the conflict is most likely to come to a head when investigators start issuing subpoenas.

Lawyers in both parties say Republicans are likely to issue these legal demands early and often, especially given the regular use of subpoenas by the House select committee investigating the Jan. 6 attack. That committee subpoenaed numerous Trump administration officials, including the former president himself, who is fighting the order in court.

Some Democratic allies said Biden should not hesitate to follow Trump’s strategy of fighting subpoenas, potentially drawing out the process and bogging down Congress’s investigations.

“My advice, unsolicited and unpaid for, would be take a page out of the Trump book and don’t bend over to these subpoena requests and fight them tooth and nail every step of the way, including into the court,” Brand said.

Other lawyers said the Jan. 6 committee’s approach, and the Trump team’s response, may have diminished Congress’s investigative powers by revealing subpoenas’ limitations.

He said when the committee did issue subpoenas, some witnesses were successful in dragging out the process through extended legal proceedings — and now the committee is expected to be dissolved under Republican leadership.

“I would analogize this to the wizard in ‘The Wizard of Oz’ and his use of mystery and the booming voice from heaven to bedazzle Judy Garland, and then eventually the curtain is removed and there he is, he is just an average mortal,” Kelner said. “Congress has really relied on that ‘Wizard of Oz’ mystery as a means of getting what it needs from witnesses. I just think that after the select committee’s use of subpoenas, the mystery ain’t quite what it used to be.”

The result may be two years of pitched political and legal battle between the White House and Republican lawmakers, as each side tries to convince voters that the other side is consumed by ugly politics.

“The Biden administration has failed to provide the Oversight Committee requested information about these many crises, but with the power of the gavel we will finally get answers the American people deserve,” Comer said in a statement. “Unlike Democrats, we will not send out subpoenas like junk mail, but if the Biden administration refuses to comply with our constitutional duty to conduct oversight, we will use all tools at our disposal.”