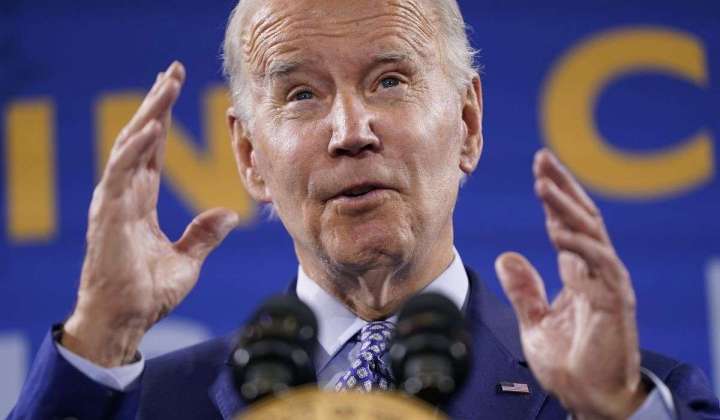 Friday marked the second year since President Biden was sworn into office. To highlight the occasion, his communications director, Kate Bedingfield, sent a “cheat sheet” to congressional Democrats and allies speaking about the “overwhelming popularity of the President’s economic agenda” and “significant legislative record.”

The memo declared that Mr. Biden was “delivering results for the American people” by lowering prices — claiming that “inflation is now at its lowest level since October 2021.”

To this, we ask — in what world is the Biden administration living?

According to an Economist/YouGov poll, 94% of Americans say they have been personally affected by high inflation. More than half of Americans believe the country is in a recession.

Grocery prices have skyrocketed, with the price of eggs spiking in December from a year earlier. Last year, the average price of a dozen Grade A eggs was $1.93 in January. By December, the price had surged to $4.25. According to a report from The Washington Times, a number of states have cut grocery taxes to relieve working Americans struggling with runaway inflation.

Five of the 13 states that taxed groceries last year — Idaho, Illinois, Kansas, Tennessee and Virginia — have since passed laws reducing their cut from supermarket transactions. Consumer prices for food rose 11.8% in the 12 months ending in December, according to the most recent data from the Bureau of Labor Statistics.

According to a Quinnipiac poll, 57% of Americans disapprove of the way Mr. Biden is handling the economy, including 61% of independents — hardly the “overwhelmingly popular” agenda the White House would like you to believe. This month, Gallup said that one of its polls found 79% of U.S. adults projected a “year of economic difficulty” for 2023, and 65% predicted it is more likely that prices “will rise at a high rate.”

As working-class families struggle to make ends meet, voters know Democrats are to blame for rising prices. Along with passing the American Rescue Act, Democrats, in August, passed a $739 billion climate change bill, disingenuously called the “Inflation Reduction Act.” Studies from the Tax Foundation, Penn Wharton Budget Model, Moody’s and the Congressional Budget Office all found that the bill will either make inflation worse or do basically nothing to bring inflation down.

After two years in office, Americans are fiscally worse off than they’ve been in years. It’s nothing the Biden White House should be celebrating.