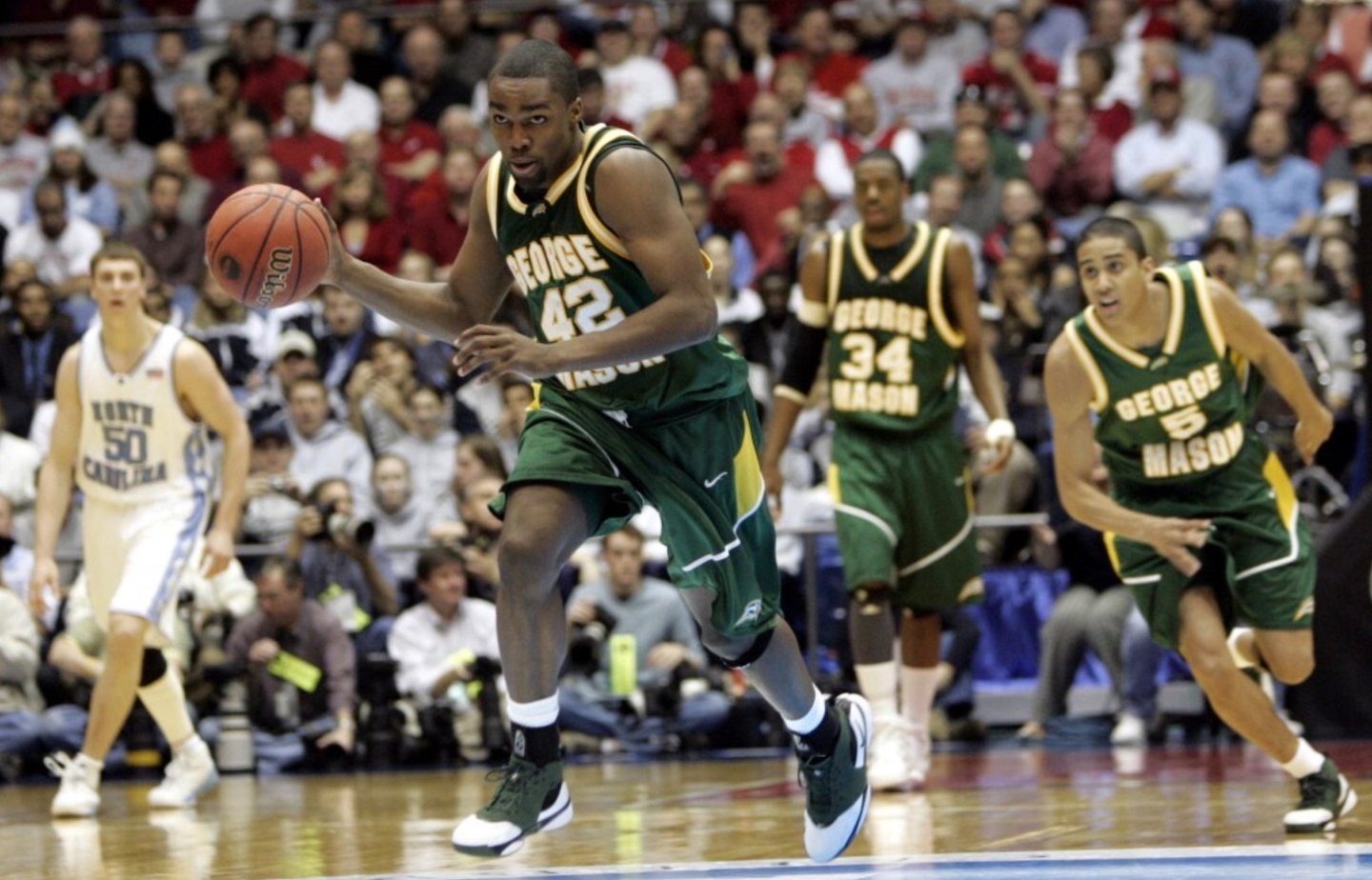 Junior center David Robinson scored a game-high 35 points, including a school record 21 made free throws, to help the Midshipmen shock the Orangemen in front of 21,713 at the Carrier Dome.

“He’s as good a big man as there is in the country,” Syracuse Coach Jim Boeheim said of The Admiral, who limited Syracuse center Rony Seikaly to four points and finished with seven blocks. “He took away our inside offense, and we just couldn’t stop him at the other end. He just killed us.”

Navy, which routed Tulsa behind 30 points from Robinson in the first round, got 23 points and nine rebounds from Vernon Butler, and eight points and five assists from point guard Doug Wojcik.

“We knew Navy had a good team, but we didn’t expect them to come and here and do this,” Syracuse guard Dwayne “Pearl” Washington said.

The Midshipmen defeated 14-seeded Cleveland State in the Sweet 16 before losing to Duke in the regional finals.

George Mason fell behind 16-2 in the first five minutes but rallied to send the defending national champions home with its second upset of the weekend.

The Patriots pulled within seven points by halftime and scored eight points off four UNC turnovers to take its first lead with 17:49 to play. George Mason limited the Tar Heels to 36 percent shooting in the game and held freshman Tyler Hansbrough to 10 points.

Those who questioned whether the Patriots deserved an at-large bid after losing in the semifinals of the CAA tournament were undoubtedly shocked, too.

“They can’t deny us a spot now,” said senior Lamar Butler, who led the Patriots with 18 points. “We showed ourselves against Michigan State. Now what do they have to say? We beat the third seed, the defending national champions. We earned our way.”

Len Bias vs. David Robinson? Yes, please. The Midshipmen led 45-34 early in the second half before Lefty Driesell’s Terps stormed back to clinch a spot in the Sweet 16.

“When they had us by 11, we just looked at each other and said, ‘We’ll never be able to live it down if Navy beat us,’ ” Maryland guard Keith Gatlin said. “They were killing us, kicking our butts. Coach told us it had to come from our hearts.”

The game turned on a questionable charging call on Navy guard Doug Wojcik with 6:43 to play and the Midshipmen leading 55-51. A little more than a minute later, Maryland led by one.

“I’m not going to comment on that call,” Navy Coach Paul Evans said afterward. “But I didn’t see any officials from our league out there.”

One of the game officials, Gerald Donaghy, was from the ACC.

JMU defeated Ohio State in the first round to set up a showdown with top-seeded North Carolina at the Charlotte Coliseum. The tournament was only 48 teams at the time, so the Tar Heels, whose loaded roster included James Worthy, Michael Jordan and Sam Perkins, were plenty rested. It was a good thing, too, because the upstart Dukes pushed them to the brink.

After James Madison made it 47-46 on Keith Bradley’s basket with 1:37 to play, Worthy scored off a lob pass from Jimmy Black and made the ensuing free throw to give the Tar Heels a four-point lead.

“I’m disappointed and crushed and very emotional right now,” teary-eyed JMU Coach Lou Campanelli said. “It hurts that we played so well but came away two points short. We actually believed we could come in here and beat North Carolina today. We played them pretty dead even for 40 minutes. I am delighted that the whole country got to see our team play so well. We shouldn’t be this good after six years of Division I, but we are. I think we belong somewhere in the top 20. I think everybody should take their hats off to James Madison.”

“They didn’t catch us flat,” said UNC Coach Dean Smith, whose Tar Heels went on to win the national title. “What you saw was one of the best teams in the nation.”

Rick Carlisle’s 12-foot jumper with four seconds remaining in overtime lifted the seventh-seeded Cavaliers to an upset of No. 2 seed Arkansas in East Rutherford, N.J.

“I just reacted,” said Carlisle, the future NBA player and coach, who hit the game-winner after teammate Othell Wilson’s shot was deflected. “There was no thought process involved. I just grabbed the ball and put it up. It seemed like three or four seconds before it came down again.”

“A lot of people underestimated us,” Virginia Coach Terry Holland said after Arkansas missed a 35-foot heave at the buzzer. “I think they can see we’re for real now.”

Wilson, who made the game-winning shot in Virginia’s first-round win over Iona, led the Cavaliers with 13 points. Virginia would go on to advance to the school’s second Final Four.

Maryland advanced to the Sweet 16 for the first time since 1985 by overcoming a 10-point deficit and shooting 70 percent in the second half.

“We were hot today, no doubt about it,” Maryland Coach Gary Williams said. “We executed our offense very well today. But to get good shots, I thought we played really good defense. We really wanted to stop their penetration.”

“We came out and just played basketball instead of just competing,” said U-Mass. junior forward Lou Roe, whose Minutemen beat the Terrapins by 14 points in December. “They kicked our butts … we couldn’t stop them at all.”

“They made tough shots,” U-Mass. Coach John Calipari said. “They made scrappy shots. They made easy shots. It was obvious they wanted the game more than we did.”

With the game tied at 34 and 51 seconds remaining, Patrick Ewing tipped in Gene Smith’s missed free throw to give the Hoyas the lead for good. SMU’s Larry Davis said he thought he had Ewing boxed out on the decisive play.

“It’s like asking Bill Russell how he got that rebound with six guys around him,” Georgetown Coach John Thompson said. “That’s why he’s a great player. He made the big play. He got around the guy for the ball.”

The Hoyas trailed 24-16 at halftime after struggling to make shots against SMU’s 2-3 zone. With no shot clock, Georgetown went to a four-corners offense after it took the lead in the second half.

“I hope this was the one bad game we have to get out of our system,” Thompson said.

One season removed from a trip to the Final Four, Georgetown didn’t survive the first weekend because it had no answer for Stephen Curry. The sophomore guard, who two days earlier led Davidson to its first NCAA tournament win since 1969, finished with 30 points to help the Wildcats overcome an 11-point first-half deficit.

“The red flag goes up for Curry [at halftime],” Georgetown Coach John Thompson III said. “He scored 30 in the second half two days ago. For the most part, we had guys all over him. And the ball [kept] going in.”

Davidson went on to rout third-seeded Wisconsin in the Sweet 16 before falling to eventual national champion Kansas, 59-57, in the Elite Eight.