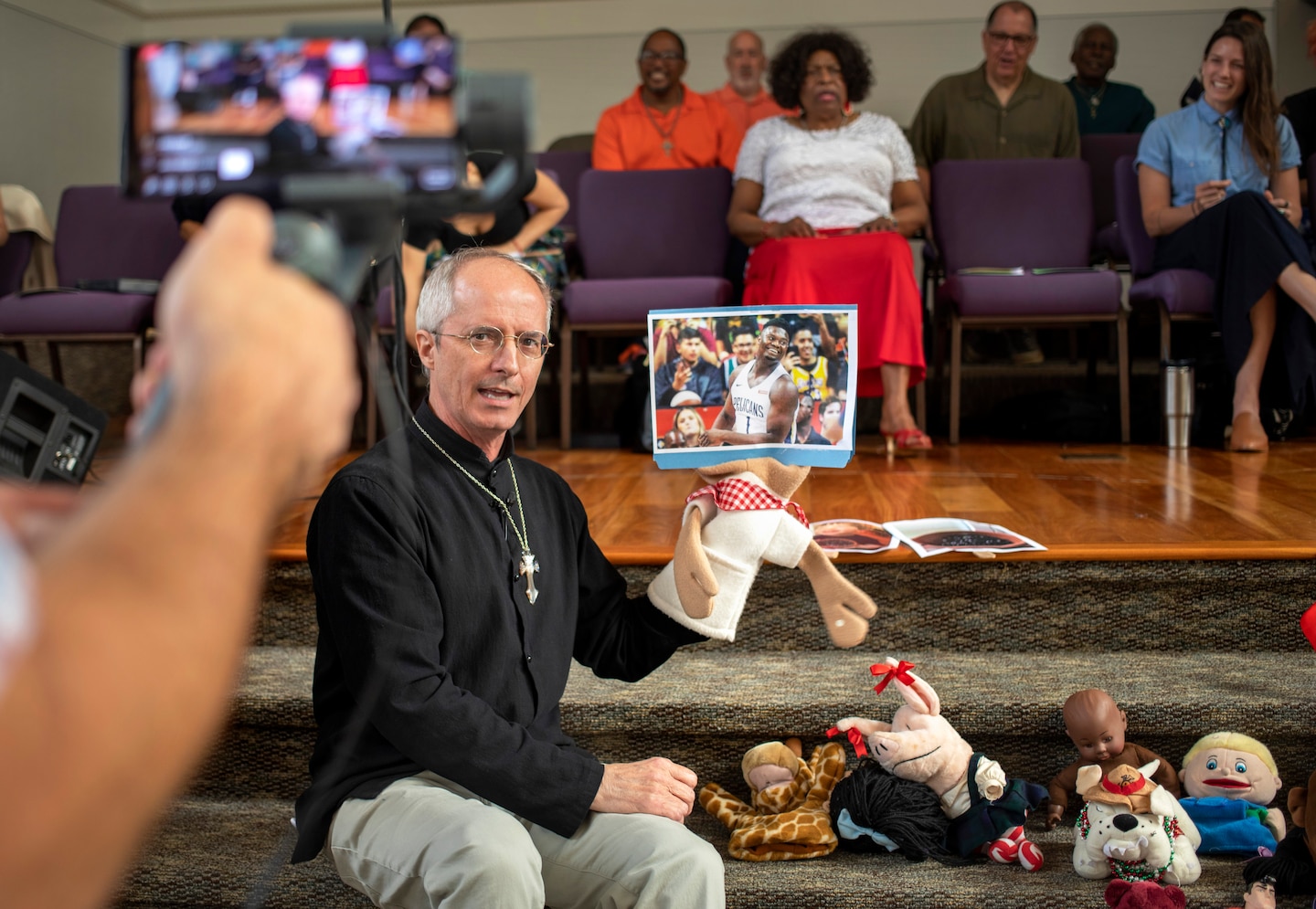 It touched Anglim that Williamson has pledged to cover the paychecks of all out-of-work arena workers at Smoothie King Center for 30 days. There are about 1,150 staff on an average Pelicans game night, according to the ASM Global management company. In a city that survived Hurricane Katrina and remains vibrant despite endless hardships, the compassion and generosity aren’t taken for granted. As the novel coronavirus mounts its silent and deadly attack, Anglim is looking for inspiration, like everyone else in the world. He found it in a 19-year-old New Orleans Pelicans forward who arrived in town just nine months ago.

“Zion is Nola,” Anglim told his congregation. “Why did I invite Zion to be with us today? Zion did a beautiful thing. In a moment of great anxiety, he figured out there was something he could do that was easy for him to do. When you have $10 million sitting around, why not give $5 million away, amen?”

It’s a simple yet cardinal message that athletes and celebrities are the perfect conduits to convey: Help others. Help others with your distancing, with your money, with your moral compass, with your phone calls and video chats, with your patience. With your grace. Let that spirit spread at a faster rate than covid-19. Williamson is among many sports figures who have continued the kindness toward arena staffs that Cleveland Cavaliers forward Kevin Love started with a $100,000 donation. Now it has become common for athletes to contribute their money and fame to various causes during this difficult time.

These are not acts worthy of excessive praise, but acknowledgment is appropriate. It can create a culture of selflessness, which grows more necessary by the day. With families isolating throughout the world to slow the contagious virus, it’s getting harder to make any kind of emotional connection beyond our shared frustration. Life is on hold, and that damned music won’t stop playing.

But while this is a time to separate, it’s never beneficial to be divided. Stars play a major role in this tricky effort to unite.

“Celebrity culture is not a healthy culture if you act like a celebrity,” Anglim said in a phone interview. “Why be a celebrity if there’s not something greater you can do with it?”

The First Grace mantra for Lent — “Darling, I am here for you” — now seems like a universal mission statement. Observing Williamson from afar, Anglim notices a young transcendent basketball talent with the same potential to impact lives off the court. From the beginning, Williamson has been humble and appreciative. He gets it, as people like to say. Now he’s an example for others to get it.

“He was there for those workers,” Anglim said. “He didn’t just see them as ‘workers’ but as people — darlings, in his eye.”

The choir helped the kids watching the Sunday service learn a song about washing their hands. They tweaked “When the Saints Go Marching In” to say, “Oh, when the Pelicans win the NBA championship.” Hum along to the revised chorus for 20 seconds, and you will have clean little mitts and renewed hope about a franchise still trying to find its NBA footing.

The backstory of the diverse First Grace church is uplifting, especially amid all the xenophobia and President Trump’s insistence on using the phrase “Chinese virus.” Two years after Katrina devastated the city, two churches — one predominantly black, the other white — merged on Oct. 21, 2007. Seventeen members from one congregation and 25 from the other came together. Today, First Grace has more than 400 members, and about 250 usually fill the church on Sundays. But it is more than a building with a preacher and a choir and a horde of Bible-toting parishioners.

The church puts its faith and benevolence in action. It has a food pantry, provides shelter for women and children and joins with other organizations for social justice. It is a bilingual church; its services are translated in Spanish. First Grace prides itself as “where the city worships.” Right now, the definition of a church — or any outfit accustomed to bringing people together — must expand. First Grace is already on that level. So it’s only natural for Anglim and his congregation to seek and celebrate the helpers.

“There’s some suffering we can’t do anything about,” Anglim said. “But there’s some suffering we can do something about. Zion Williamson, as a 19-year-old, set a strong example of what we can do. It’s crucial to keep social distancing, but it’s crucial not to live in isolation and selfishness. There’s a lot of suffering going on, in many forms, and we have to find a way to be together in that and help one another.

“This is a moment we didn’t ask for, but if we can do that, we can come out with a stronger set of relationships that don’t happen if not for these circumstances.”

Anglim has four known cases of the coronavirus in his church. Two members have required a ventilator, but all four seem to be progressing toward recovery. As a pastor, as a community leader, Anglim spends the majority of his free time trying to determine how he and the church can make a positive impact. He has had to guide people through Katrina and numerous cases of police lethality that wounded the hearts of his congregation. The latest challenge is unprecedented, however.

“It makes it real for us,” Anglim said of the church’s covid-19 cases. “If you don’t have a story like that, it’s just a matter of time. We need to connect and embrace people from all walks of life with our concern. If people don’t have a church, they’re going to find out how much they need one.”

Anglim is not proselytizing as much as it seems. In talking about the church, he is discussing what he knows. But substitute the word with “community,” and it has the same meaning and speaks to all audiences.

Williamson has played just 19 games in a Pelicans uniform, but he has given New Orleans more than powerful dunks and amazing displays of strength and agility. It’s not merely about donating money. The Pelicans are paying him $9.8 million this season, and he has a Jordan Brand shoe deal reportedly worth $75 million. The willingness to give and the message it sends to his countless followers matter most.

Last week, a church member handed Anglim $1,000 in cash and said, “I’m sure you’ll find good use for this.” The pastor did the Zion thing and spread the cash around to several people.

“Times like this can bring out the worst in us and our fears and anxieties,” Anglim said. “And they can bring out the best. In New Orleans, we’re such a tourist place, and this virus and the distancing hits us very hard. But Zion is following the advice he said he received from Drew Brees. Brees told him, ‘Love the people in the city of New Orleans, and they’ll love you right back.’ We have felt that. I hope he’s here a long time.”

We can worry about “a long time” later. For now, it’s a blessing that Williamson and many others are in the moment, connected to the needs of others and eager to practice that First Grace Lenten mantra: “Darling, I am here for you.”