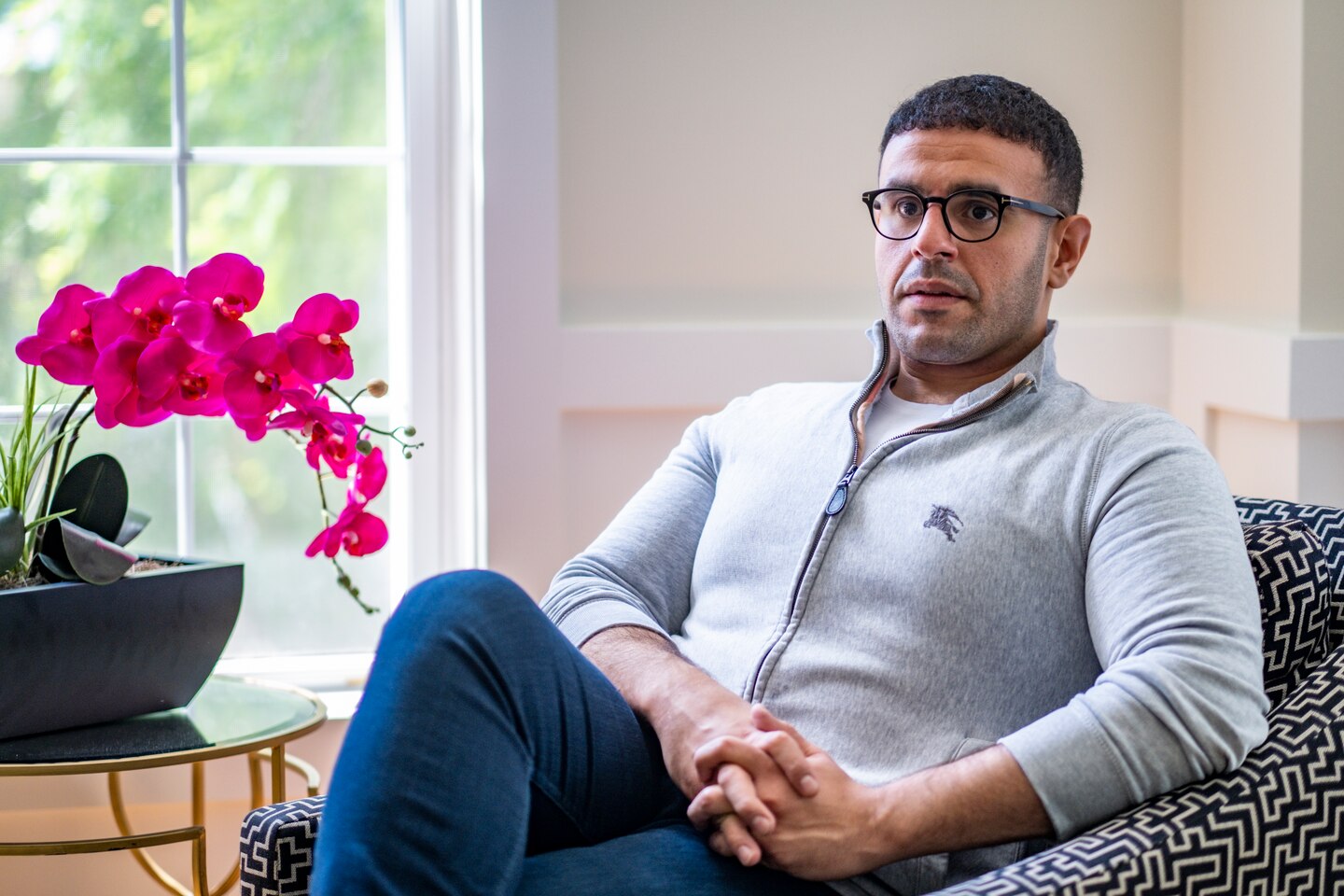 Desouky’s brother is in jail without charge to ensure that she doesn’t describe her 10-month ­ordeal to the outside world or criticize the Egyptian government, she said.

“They are holding him to keep me from talking about what happened,” Desouky said.

Five of Soltan’s relatives were forcibly taken by security forces from their homes last month, and his imprisoned father was interrogated. That came after Soltan filed a lawsuit in the United States against former Egyptian prime minister Hazem el-Beblawi, accusing him of overseeing the torture Soltan endured in prison.

“There is no doubt that the government is holding my five apolitical cousins and dad hostage to pressure me into silence,” he said. “The ransom is dropping my lawsuit. They told my family so.”

Human rights activists say that relatives of more than two dozen political opponents, human rights workers, pro-democracy activists and journalists living abroad have been arrested in Egypt, their houses often raided by security forces. Family members have also been slapped with travel bans or hauled into security offices for interrogation, the activists say.

“The objective is to spread fear among Egyptian activists in exile or in self-exile,” said Mohamed Lotfy, executive director for the Egyptian Commission for Rights and Freedoms. “The government is saying, ‘We are watching you. We might not be able to harm you but we can do worse by harming your relatives.’ It’s a very powerful tool.”

Egypt’s State Information Service did not respond to two requests for comment.

The government of President Abdel Fatah al-Sissi began threatening relatives as early as 2016, human rights activists said. But they say blackmailing of Americans living in the United States is new, reflecting the deepening authoritarianism in Egypt.

The Trump administration has said little in public about human rights abuses in Egypt, even as U.S. officials have applied pressure to release some jailed Americans. The silence, critics say, has convinced Sissi’s government that it can widen its repression without serious consequences.

“Sissi’s state thuggery has been met with toothless diplomacy,” said Soltan, referring to the targeting of relatives.

A U.S. Embassy spokesperson in Cairo pointed to a June 24 tweet by the State Department’s Bureau of Near Eastern Affairs expressing concern for Soltan’s relatives. “We will continue to monitor the situation and take seriously all allegations of harassment and intimidation,” the tweet read.

A senior State Department official said that the reports of American citizens “being harassed through their relatives” are “alarming” and that U.S. officials are “engaged with the Egyptian government” on the matter.

“Egyptian Americans who go back to Egypt have to abide by Egypt’s laws, and it just so happens that those laws are draconian,” said the official, who spoke on the condition of anonymity to freely discuss the U.S. relationship with Egypt. The official added, “There is not a judicial process that is of a Western standard there. At the same time, given the close nature of our relationship, I think the treatment of Americans could be a lot better.”

Human rights have significantly deteriorated under Sissi, a former army general who came to power in 2014 after orchestrating a military coup that toppled democratically elected president Mohamed Morsi and his Muslim Brotherhood movement.

Tens of thousands of political opponents, pro-democracy activists and others have been jailed, most on trumped-up charges, say human rights activists. Those jailed have included American citizens, including Mustafa Kassem, 54, an auto parts dealer from New York who died in prison in January.

The U.S. government, however, has continued to provide Egypt with billions of dollars in assistance.

When Desouky and son Moustafa, then 13, arrived in Cairo last July on a family visit, they were detained by Egyptian security officers.

The officers confiscated their phones and scrolled through her social media accounts, recalled Desouky, who is a dual Egyptian-American citizen and applied arts teacher in Lancaster, Pa. She was questioned for hours and then placed with her son in a holding room for four days before he was released. Desouky was then transferred to a prison, charged with criticizing the government on Facebook.

Days later when her brother, Nour, brought Moustafa to visit her, prison officers arrested Nour, who had contacted the U.S. Embassy on her behalf, she said. Nour, who owned a clothing factory, was not politically active, ­Desouky said.

Desouky was released in early May after U.S. pressure and amid concerns about the novel coronavirus spreading in the prison, according to the senior State Department official. As she and Moustafa prepared to board a plane to Washington, an Egyptian security agent issued a warning: “He told me to keep silent,” she recalled.

In Fairfax, Soltan, 32, was ecstatic. Through his prisoner’s advocacy group, the Freedom Initiative, he had been lobbying the Trump administration and lawmakers on Desouky’s behalf, speaking with journalists and posting on social media to raise awareness of her plight.

Soltan knew how Desouky felt upon her release. He had been arrested in 2013 for working with protesters after Morsi’s ouster and was held for nearly two years.

In early June, Soltan filed a lawsuit alleging that he was tortured and targeted for assassination by the Sissi regime. He named Beblawi as a defendant, accusing him of monitoring the abuses.

On June 15, security forces raided the homes of four of Soltan’s uncles in two governorates in Egypt, he said. They held their entire families, including children, at gunpoint, Soltan said. Then, he said, they “kidnapped five of my cousins from the comfort of their beds. They were blindfolded and taken to an unknown location.”

“No one from the family has been able to communicate with them since they were kidnapped,” he said.

Soltan’s father, Salah Soltan, a prominent Islamic scholar and deputy minister in Morsi’s government who has been imprisoned for nearly seven years, was interrogated about his son and the lawsuit, said the younger Soltan. Then the father was taken to a location unknown to the family, and they’ve had no information about his whereabouts since then.

“We are terrified for his well-being and safety given his frail health during the pandemic,” Soltan said.

‘My family is scared’

Today, Desouky said she suffers from anxiety and sleep loss. She worries that her brother will become infected with the coronavirus in Cairo’s infamous Tora prison. His factory is closed, leaving his wife and three children, as well as all of his employees, with no income, she said.

Nour’s family hasn’t seen him since March, after the Egyptian government banned prison visits ostensibly to prevent the spread of the coronavirus, she said.

Desouky is afraid of being too outspoken. She declined to answer whether she endured any torture or other abuses in prison. Her family in Egypt has pleaded with her to keep a low profile. She hasn’t posted anything on Facebook or other social media about her brother’s plight — or anything critical of the Egyptian government. “My family is scared,” she said.

Soltan has been outspoken about his relatives’ plight. Congressional lawmakers in a letter last week declared that Sissi is waging an attack on the U.S. judicial system by jailing Soltan’s relatives and seeking to derail his lawsuit. They called on Egypt to release his relatives.

Meanwhile, Soltan has continued his efforts to liberate more American prisoners in Egypt.

On Sunday, Mohamed Ama­shah was the latest to be freed. The 24-year-old arrived back home in Jersey City on Monday after 486 days in prison for holding up a sign in downtown Cairo that read “Freedom for all prisoners.”

Secretary of State Mike Pompeo thanked Egypt on Wednesday for releasing Amashah, and urged the Sissi government “to stop unwarranted harassment of U.S. citizens and their families who remain there.”

Soltan, for his part, says he will not be blackmailed into dropping his lawsuit.

“The regime is a hammer that sees everything as a nail, and I’m no nail,” Soltan said. “I refuse to be bullied into silence.”