Farm to parking lot to table: The pandemic is inspiring creative efforts to get locally sourced food 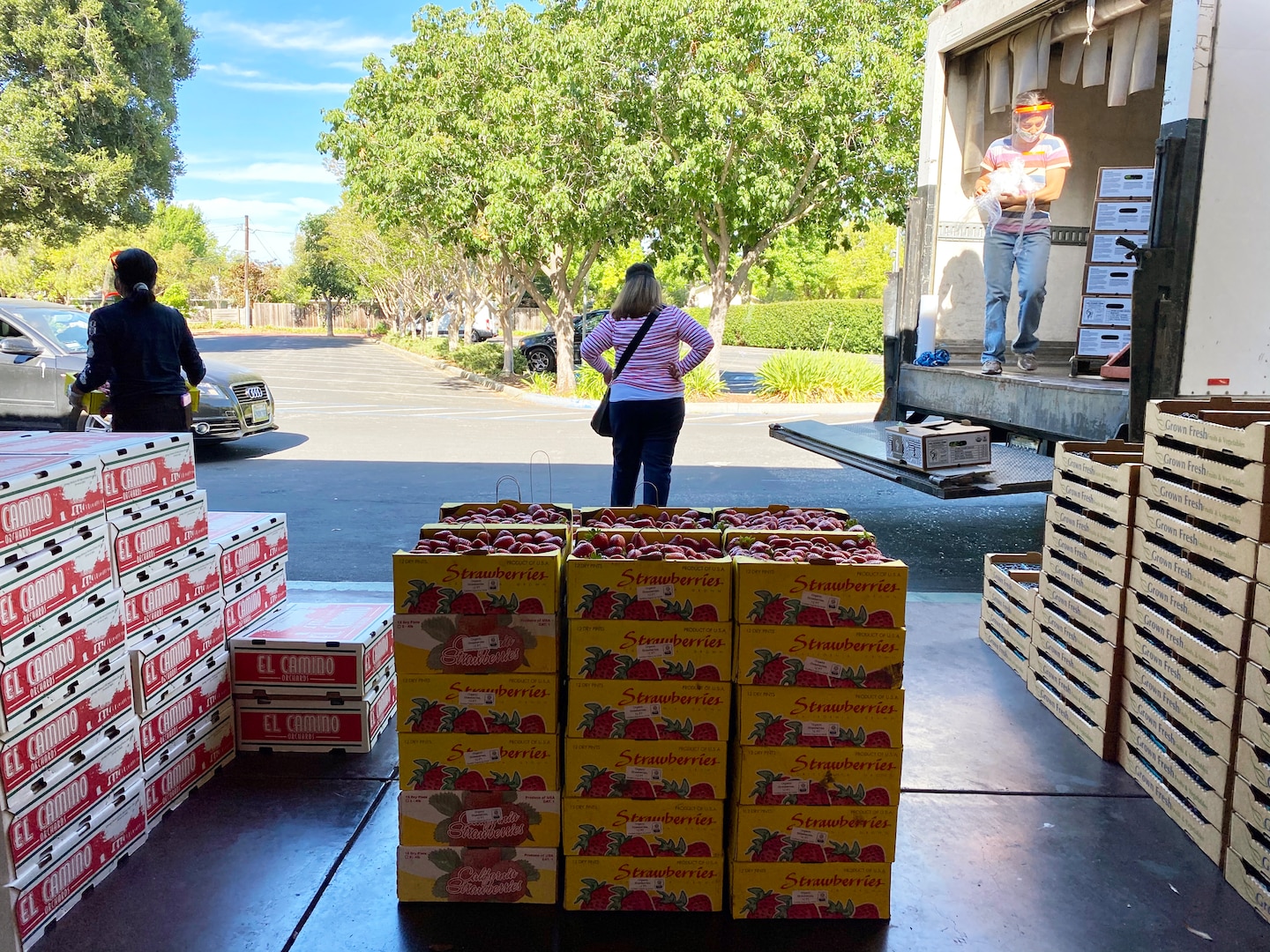 They listed pounds of yellow and red cherries, flats of organic strawberries and blueberries, or a box of miscellaneous veggies. A team of teenagers loaded produce into the back of each car, completing the last phase of what’s become an elaborate weekly bulk-fruit and vegetable-selling operation that started with a post on Nextdoor.

A passion for start-ups is still humming in Palo Alto, even as the heart of Silicon Valley goes into its fourth month of coronavirus restrictions. But its latest invention isn’t high-tech so much as an old-school alternative to the farmers market, with a pandemic twist. It doesn’t hurt that Silicon Valley is just a couple hours from the state’s produce-rich Central Valley, which produces a fourth of the food in the United States. That helps explain the bargain prices, such as $34 for 12 pints of organic strawberries.

Located near Stanford University, Palo Alto is home to companies including Tesla and Palantir. Its residents include founders such as Facebook’s Mark Zuckerberg and Google’s Larry Page, as well as a number of other tech billionaires, including Laurene Powell Jobs. It has one Whole Foods.

Local resident Maria Gregorio is the mastermind behind the bulk-fruit buy and pickup, which she calls Giving Fruits. She came up with the idea just before Mother’s Day after meeting a woman named Marisol Lopez who was selling bulk amounts of cherries she’d brought from a farm in Sacramento through social media. Gregorio, an IT professional at Stanford University, extended the offer to more people online and contacted other farms directly herself to expand the options.

“I said, ‘Hey, neighbors, I need a minimum of five people who want to buy with me.’ The next day I had a hundred inquiries,” said Gregorio. “The next thing I know, I have thousands of dollars cash in my Venmo and PayPal.”

She started organizing sales through a WhatsApp chat group, until she hit the maximum number of members. It’s now a Friday establishment with its own website and rudimentary ordering and payment system. People go on the site to check out the weekly list of offerings and pay her online, then bring their phones and the lists they write to the pickup. Cherries and strawberries were the most popular at first; now she’s adding more vegetables, like 12 pounds of summer squash for $20.

Gregorio is not alone in finding new ways to move food. People have been exploring different ways to get, share and sell food during the pandemic, including bartering, buying grocery staples from restaurants with wholesale contacts, and signing up for community supported agriculture, or CSA, boxes.

Giving Fruits customer Allyson Rosen used to buy her produce from the farmers market, tasting samples before purchasing. Now the neuropsychologist picks up fruit from Gregorio every week, and has even connected her with a blackberry seller who was struggling. Most recently, Rosen took home 15 pounds of sweet and delicate Blenheim apricots, selling a third of the haul to a friend.

“I’d like to be able to try my fruit before I buy it again, but certainly, now knowing that the farmers are in trouble, I really want to support this,” said Rosen.

The pandemic has brought more attention to where food comes from and the role of local providers. Global food supply chains are complicated, and the difficulty involved in rerouting fresh goods when demand dries up in an area has been frustrating for producers and consumers. There have been some success stories, like unused airplane food finding its way to Imperfect Foods, a company that started by selling edible, unattractive produce. But many farms have had to throw out entire crops or thousands of gallons of fresh milk while food banks report more demand than ever.

Farms are scrambling to connect directly with customers, after a loss of business from restaurants and with some even being pushed out of farmers markets for social distancing reasons. Dairy farmers are delivering milk to individual doorsteps again. Vegetable growers are distributing produce from homes, and farmers market mainstays are doing preorders. A seafood company is giving discounts to volunteers who handle fish pickups.

“We had to figure out how to sell what we had,” said Marsha Habib, owner of Oya Organics, a small organic farm an hour away in Hollister. “Overnight, I had to organize our consumer-supported agriculture program. That’s what people wanted. They didn’t want to go to the store or to the farmers market.”

Before the pandemic, Oya’s main customers were restaurants and Stanford’s dining hall, which served thousands of students three meals a day until the campus shut down in early March. Habib has been transporting more than 2,000 pounds of produce to Palo Alto on Fridays for Gregorio to sell, most for less than she usually charges. She sells a flat of organic strawberries to Gregorio for $26. Some is from her own farm but much is grown by other small operations nearby.

“We were able to pivot really quickly and find out who wants produce,” said Habib.

It’s not just produce. Real Good Fish, a company that sources directly from California fishermen and sells to individuals as well as wholesale, uses private garages and struggling restaurants and stores as seafood pickup spots. Around 150 volunteer “hosts” get large shipments of fresh fish in boxes, and customers stop by to pick them up that day. In exchange, the hosts get discounts and a couple of free boxes themselves, as well as a monthly “surprise” from the company.

When the pandemic started, the seafood market was hit hard, with exports slowed to a halt and restaurants closed or forced to switch to takeout only. Real Good Fish, however, saw its direct-to-consumer business skyrocket, according to Jenn Lovewell, its chief nutrition officer. The company launched home deliveries and added premade options like tuna burgers, pasta kits and pre-marinated fish.

“We also thought a lot of our pickup site hosts would want to take a pause, but they said they found that their role in our business model was even more important than ever,” Lovewell said.

Dirty Girl Produce in Santa Cruz was long a fixture at farmers markets and sold directly to restaurants. But after the pandemic hit, the farm’s usual distribution methods slowed and the owners decided to take produce to the customers — or as close as they could get, short of delivery.

Now every Thursday afternoon, David Knopp, a chef and longtime friend of the farm’s owner, opens his garage and hands out prepaid produce boxes to his San Francisco neighbors. He greets them at a safe distance with proper protection and his dog Pickle nearby. Knopp is manning one of almost 20 pickup spots in Northern California. He had taken on a bulk blueberry buy earlier in the summer, similar to Gregorio, but the logistics and time needed to handle the customers were overwhelming.

Gregorio is embracing the extra work, which takes up about two hours a day, more on Fridays. She still works with Lopez, but now places orders with local farms directly as well, primarily with Oya and its network of community farms. Her orders vary based on what’s available and the amount of interest from locals. The prices keep many coming back, most buying a few of the week’s bulk options: $34 for 12 pints of strawberries, $20 for a 12-pound box of squash, 15 pounds of apricots for $45.

Rosen said “it’s probably more affordable” than what it would cost her at the farmers market, but she’d spend more for the quality of fruit Gregorio offers. The apricots, for example, aren’t sold in stores and are only available a short time every year. “I don’t buy fancy things, but when it comes to fruit like this, it’s worth every penny, and to support the farmers.”

Gregorio says she sells the produce at a 9 to 10 percent markup but keeps no money for herself. Instead, she hopes to turn the operation into an official nonprofit benefiting a variety of local causes, including the program that feeds front-line workers, a women’s shelter and eldercare homes.

One of her biggest issues so far has been people not picking up their orders. She quickly discovered storing them in her unrefrigerated garage wasn’t an option, because of fruit flies. She solved the issue by giving anything unclaimed to local groups like an eldercare home and a women’s shelter.

She also struggled to find a space big enough to accommodate a line of cars, but the city worked with her to temporarily approve the library parking lot. Students in nearby Portola Valley and Pleasanton have started other branches of the operation, selling the produce to their own communities and donating the profits as they see fit.

Giving Fruits is now buying produce from five farms as well as Lopez, with a rolling list of offerings that changes with the season and what was harvested last. On any given week there might be berries, squash, summer classics like pluots and apricots, cherry tomatoes and sweet corn. Lopez, a mother of four whose beauty salon has been closed, is using the income from working as a fruit middleman to pay rent and feed her family. Gregorio doesn’t know which farm she sources from.

On the recent Friday, the team of four teenage volunteers — Gregorio’s two sons and their friends — loaded heavy boxes of cherries and other fresh fruit into each car as it pulled up. They wore latex gloves, face masks and clear face shields a friend 3-D-printed for them. They talked to customers at a distance through cracked windows.

Nearby, Oya’s Habib finished unloading her truck. Without their usual customers, the fate of crops Oya had already planted was up in the air. They recently had to destroy two acres of butter lettuce they weren’t able to sell, losing out on $20,000 to $40,000 in income, and are now stuck trying to predict the future to decide what to plant next.

Habib says they haven’t seen much renewed demand from restaurants yet, and Stanford is considering a limited reopening in the fall. The Palo Alto produce purchases make up for a small amount of the money Oya and other farms have lost, but not all. Being paid upfront is part of what makes the unorthodox arrangement appealing to the farms Gregorio works with, since it’s more certain than farmers markets. They’ve struggled to sell produce at the markets during shelter-in-place orders, with lower attendance and stricter regulations, like pre-bagging all products.

They’re happy for the options that help them survive. And for the people helping farms, like Gregorio, Real Good Fish’s hosts and Knopp, the benefits are not necessarily financial.

“I think we’ve all been socially starved, and I feel like I’ve been really lucky that I have this four-hour window when people come to my house, and they’re careful and social distancing,” said Knopp. “It really does feel nurturing.”