Take it from the Wizards: Redskins name change won’t make everyone happy 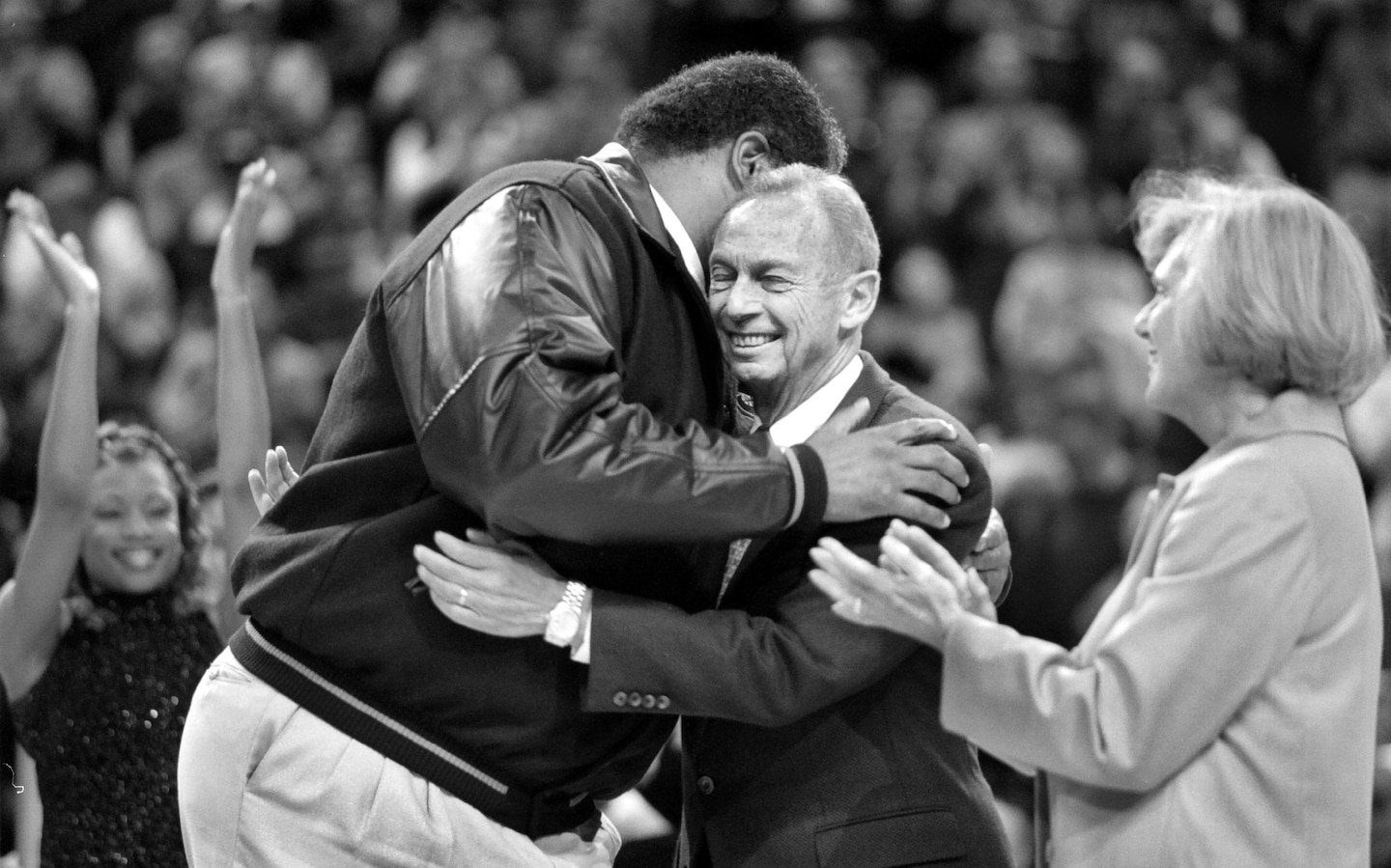 Williams speaks from experience. He spent 22 years with Washington Sports & Entertainment and was the vice president of communications for the Washington Bullets when the team changed its name to the Wizards at owner Abe Pollin’s behest before the 1997-98 season.

While Washington sports fans have gotten used to calling the District’s NBA team the Wizards over the past two decades — despite many wishing Bradley Beal and Co. still wore “Bullets” or any number of other names across their chests — there were times during the fan-involved selection process when it seemed no one was pleased.

With team merchandise sales lagging compared to the rest of the league, the Bullets were already considering a makeover in the form of a new color scheme and uniforms to coincide with their move into a downtown arena in 1997. Five days after his good friend, Israeli Prime Minister Yitzhak Rabin, was assassinated at a Tel Aviv peace rally on Nov. 4, 1995, Pollin announced the team he purchased in 1964 and moved to Washington from Baltimore nine years later was also in search of a new name.

“My friend was shot in the back by bullets,” said Pollin, who had become increasingly uncomfortable with his team’s association with the gun violence that had ravaged the District in recent years. “The name Bullets for a sports team is no longer appropriate. This franchise has a history and we’ll maintain that history.”

Over the next month, the Bullets invited fans to submit their ideas for new names at Boston Market restaurants in the area. More than 500,000 ballots were cast for 2,996 different names.

“I see this as kind of unifying the community,” Pollin said in February 1996.

While the Redskins haven’t announced details of their review, including whether fans will have a say in a new name, the Bullets’ process was as transparent as it was elaborate. A seven-person panel, which included Pollin, Bullets President Susan O’Malley, WRC-TV sports director George Michael and Bullets forward Juwan Howard, rated each name on a 1-to-10 scale and pared the list to 13.

There wasn’t much consensus among the panelists. The Washington Post’s Ken Denlinger reported that Wizards was the top choice with an average rating of only 6.3, followed by Jaguars (4.1), Fury (4) and Cobras (3.6). The latter three names were thrown out due to trademark concerns after a cursory review by the league office, as were Monuments and Wolverines. The reaction to the five finalists — Wizards, Express, Stallions, Dragons and Sea Dogs — from fans and media members was overwhelmingly negative.

“As a last resort you could combine the names of Abe Pollin, Susan O’Malley and Juwan Howard and call them the PolMalWans — makes about as much sense as any of the others,” Norm Smith of Burke, who preferred the name Monuments, wrote in one of several letters to the editor criticizing the options over the coming days.

The Bullets’ front office expected as much.

“My colleagues all warned me this would happen,” Pollin said, when asked about the reaction from fans. “They’d been through it. The guy in Denver said he was told Avalanche was a terrible name, but now everyone loves it. Same thing with Raptors in Toronto. All my colleagues told me to be prepared. Stand firm.”

“It’s 4 million people trying to name a baby,” O’Malley told The Post. “I would never name my child Tiffany, but a lot of people would.”

The Post Sports staff made the case for Justice, noting that the new downtown arena could be referred to as The Supreme Court and the team could sport black jerseys inspired by judicial robes. After the finalists were announced, The Post organized its own telephone poll; of the more than 19,000 calls received, 85 percent weren’t in favor of any of the five potential new names.

“I wasn’t surprised by the reaction at all, frankly,” Williams, who left Washington Sports & Entertainment after the 2010 NBA draft, said this week. “The longer we went through the process and the more we heard from people, it was clear there was no chance we were going to have a resounding name that everyone loved. It really became evident how many different opinions there were. At one point, I was just like, ‘Wow, let’s get this done.’”

Wizards was Pollin’s favorite name among the finalists. It was Williams’s preferred choice, too.

“I was like, ‘I know which one I want, and it better not be one of these others,” Williams said. “Sea Dogs isn’t a horrible name, but it didn’t make any sense here. I didn’t mind Express, but Wizards was the one I wanted. The alliteration helped.”

Fans were given the opportunity to vote on the five finalists via a 1-900 number, with the proceeds from each $1 call going to the team’s newly established anti-violence campaign. Pollin announced Wizards as the easy winner on Feb. 22, 1996, though he declined to disclose how many votes were received or the margin of victory.

“It’s someone who can do things,” he said of the moniker. “It’s magic, flamboyant smart and a winner. All those things connote a winner. Once we get the new logo and uniform and colors it’ll be fantastic. The NBA has very creative people.”

On the day of the announcement, Bullets fan Adam Smith speculated that the contest, with four “lousy” names among the finalists, was set up to result in Wizards being the winning the choice.

“But if they win a world championship, no one will care what they’re called,” he said.

The Wizards didn’t win a world championship, of course. In fact, after making the playoffs for the first time in nine years during their final season as the Bullets, Washington failed to qualify for the postseason in its first seven seasons as the Wizards. That more than anything, Williams said, has colored fans’s perception of the change.

“Winning fixes everything,” Williams said. “That’s not an original statement, but that is absolutely the truth when you work in sports. Anybody who felt like they didn’t like the name would’ve come right along on the ride if the team had won more. There’s no doubt about that. Whatever the Redskins do, the same thing goes for them. They’re going to pick a name and there are going to be a lot of people that don’t like it, but if they win, it’s going to soothe any bad feelings.”

Abe Pollin’s oldest son, Robert, a professor of economics at the University of Massachusetts-Amherst who grew up a die-hard fan of the Bullets and Redskins, doesn’t know if his father ever discussed the Redskins’ name with Snyder before he died in November 2009. He said his father was “disappointed” Snyder wouldn’t make a change that he regarded as the ethical thing to do. He’s also convinced that the majority of his fellow Redskins fans will adapt just fine to a new name, no matter the result of the team’s review process.

“I was attached to the [Redskins’] name, but certain things are more important,” said Pollin, who wrote a 2014 opinion piece in The Post calling on Snyder to change the name. “ … If you live in the city and follow the team and like the sport, you just get used to it. It’s the team, it’s the players, it’s the excitement. Some names are better than other names, but in the end, it’s just a name.”

Hail to the Washington Sea Dogs?