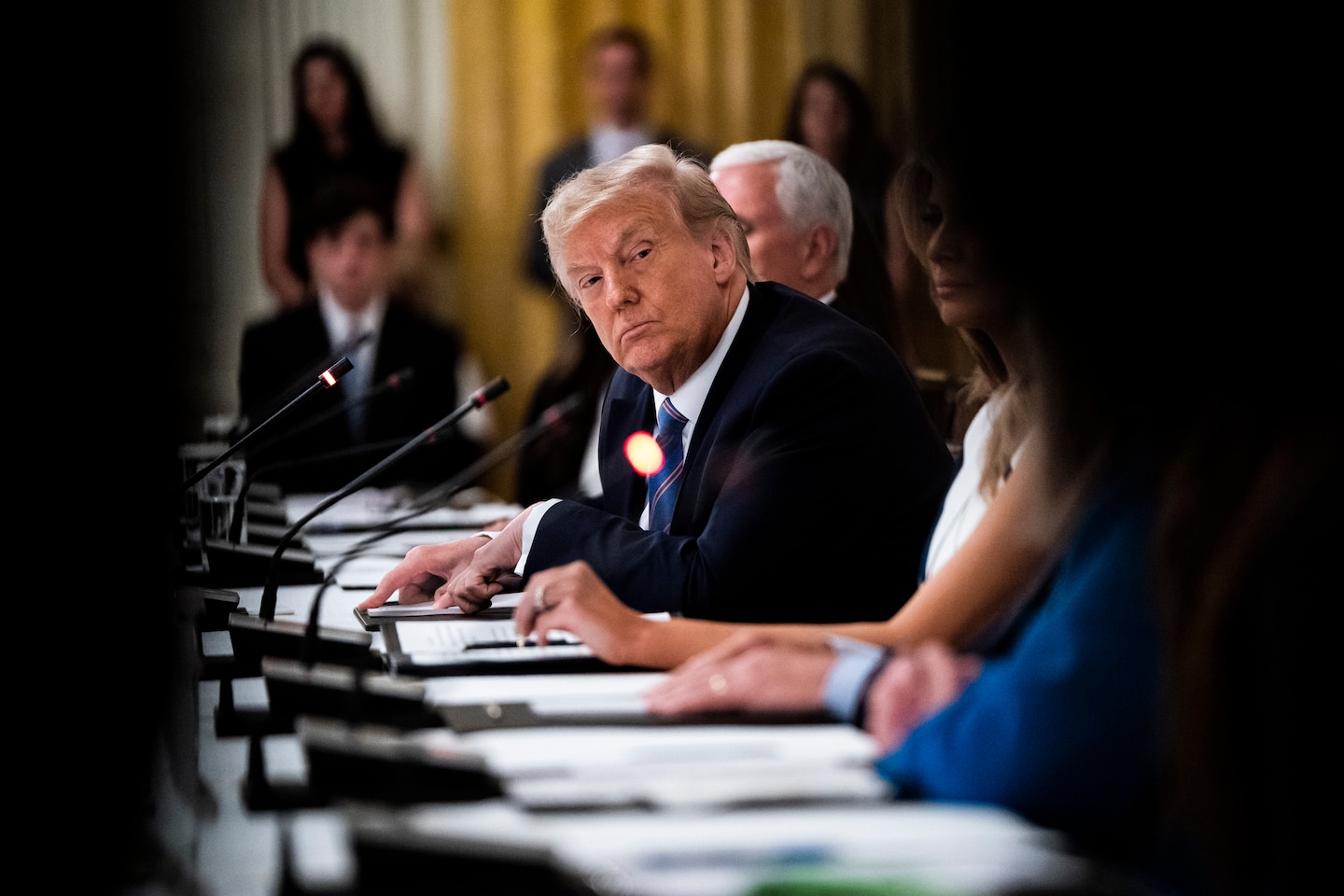 In a conversation with his friend Sean Hannity that aired Thursday night on Fox News, though, the president went further. The subtext became overt.

“What we’ve done,” he added later, “is we’ve created tremendous number of cases.” And all that testing, he continued, is “the greatest thing that ever happened for the opposite party.”

This was one of three occasions the same day on which Trump overlapped his coronavirus response with partisan politics.

At a White House event on Thursday afternoon, he demanded that schools reopen, describing opposition to doing so as “political nonsense.”

“It’s only political nonsense,” he added. “It’s politics. They don’t want to open because they think it will help them on Nov. 3.”

In an interview with conservative radio host Howie Carr, Trump sympathized with complaints about efforts to contain the virus, such as mandated use of masks in states like New Jersey and Maine.

“You have a governor in Maine that won’t let people even look at each other,” Trump said. “I’ve never seen anything like what’s going on with these — it’s really the blue governors, and they haven’t done very well.”

A lot of this is simply finger-pointing. Carr is complaining about masks, so Trump says it’s the fault of Maine Gov. Janet Mills (D). Trump knows that people want schools open, so he blames Democrats for keeping them closed.

But that comment to Hannity is something else. It’s Trump recognizing that the pandemic is a political liability for him, something reinforced in new ABC News-Ipsos polling. Two-thirds of the country think he’s handling the coronavirus poorly, including more than a fifth of Republicans. Tests lead to cases, which leads to criticism, Trump seems to believe, so he’s mad at the tests. The tests, like so many other things, are just the universe arraying against Donald J. Trump.

The staggering shortsightedness of this!

Consider Trump’s complaint to Hannity alone. We cut out a lot of it (it went on for about 40 seconds), but the upshot was that the case totals are amplified by how many tests the United States conducts, catching people who maybe have mild or no symptoms. Other countries, he said, only tested patients at hospitals or when someone has strong symptoms.

“We have cases all over the place,” he said. “Most of those cases immediately get better. They get, you know, people, they’re young people, they have sniffles and two days later, they’re fine and they’re not sick, just sort of — they’re asymptomatic.”

What’s interesting about this articulation is that it gives us a better sense of what Trump’s actually annoyed about. He’s annoyed, in short, that asymptomatic cases are being detected and counted in the totals. That’s why he keeps saying (falsely) that the negative effects of the virus are felt only by a tiny percentage of those who contract it: He’s trying to reinforce that most of the cases the United States is reporting are — reading between the lines — not “real” cases, not dangerous ones.

He’s long been more worried about the reported number of cases than the actual patients those numbers represent. In March, he explicitly said that he preferred not to bring passengers onshore from a cruise ship docked off California because it would increase the number of cases the United States was reporting.

But he’s oblivious to the fact that broad testing that identifies asymptomatic cases actually helps him over the long term. As does taking a cautious approach to reopening schools. As does having people wear masks. These are the sorts of things that will slowly mitigate the pandemic, by, in order, allowing for those exposed to the virus to be quarantined, by ensuring that schools don’t serve as super-spreading environments and by preventing common person-to-person transmission. These are, really, minimal efforts that should be implemented to alleviate the pandemic. Pushing infections downward will help push Trump’s approval numbers upward.

Trump knows that people won’t like these things and, more importantly to him, that his base may not. An Economist-YouGov poll conducted earlier this week found that 7 in 10 Americans support a mandatory mask policy. That includes a majority of Republicans — but only 4 in 10 of those who support Trump in the November election. For a president focused obsessively and repeatedly on ensuring that his base turns out to vote for him, that number is a cautionary one.

Trump’s articulation of how other countries are testing is wrong, by the way. Countries such as South Korea aren’t testing as much because they don’t need to. They tested a lot early, traced contacts of infected individuals and contained the spread of the virus. The government has deployed a robust system for containing outbreaks, and the country has moved toward normalcy. In fact, it did so months ago.

That Trump somehow can’t see this, can’t see that asymptomatic people need to be identified and can’t see that wearing masks is essential and can’t see that opening schools is more fraught than simply declaring them to be open — a lesson he should have learned when he pushed for the economy to reopen — is nothing short of baffling. All of this is predictable. All of the experts have outlined different paths to different outcomes, and Trump keeps marching down riskier ones while complaining about how China is making him do it.

I return to this chart, which I made yesterday and which, I think, summarizes Trump’s approach to the virus very neatly.

The Republican Party announced in 2018 that it would hold its convention in Charlotte. This spring, though, Trump learned that the city was insisting on maintaining mask and social distancing rules, things that Trump saw as opposed to the aesthetic he wanted as he accepted his second nomination: a big, cheering crowd. The city of Jacksonville has no similar containment standards, so Trump eagerly transitioned his speech to Florida.

Now, even if you don’t know what happened, you know what happened. Charlotte’s efforts to contain the virus meant a smaller surge in new cases. Jacksonville’s failure to do so had the opposite effect, like so.

So now Jacksonville is more likely to have precisely the sort of rules that Trump was hoping to avoid in the first place.

This, Trump would likely say, is all someone else’s fault.