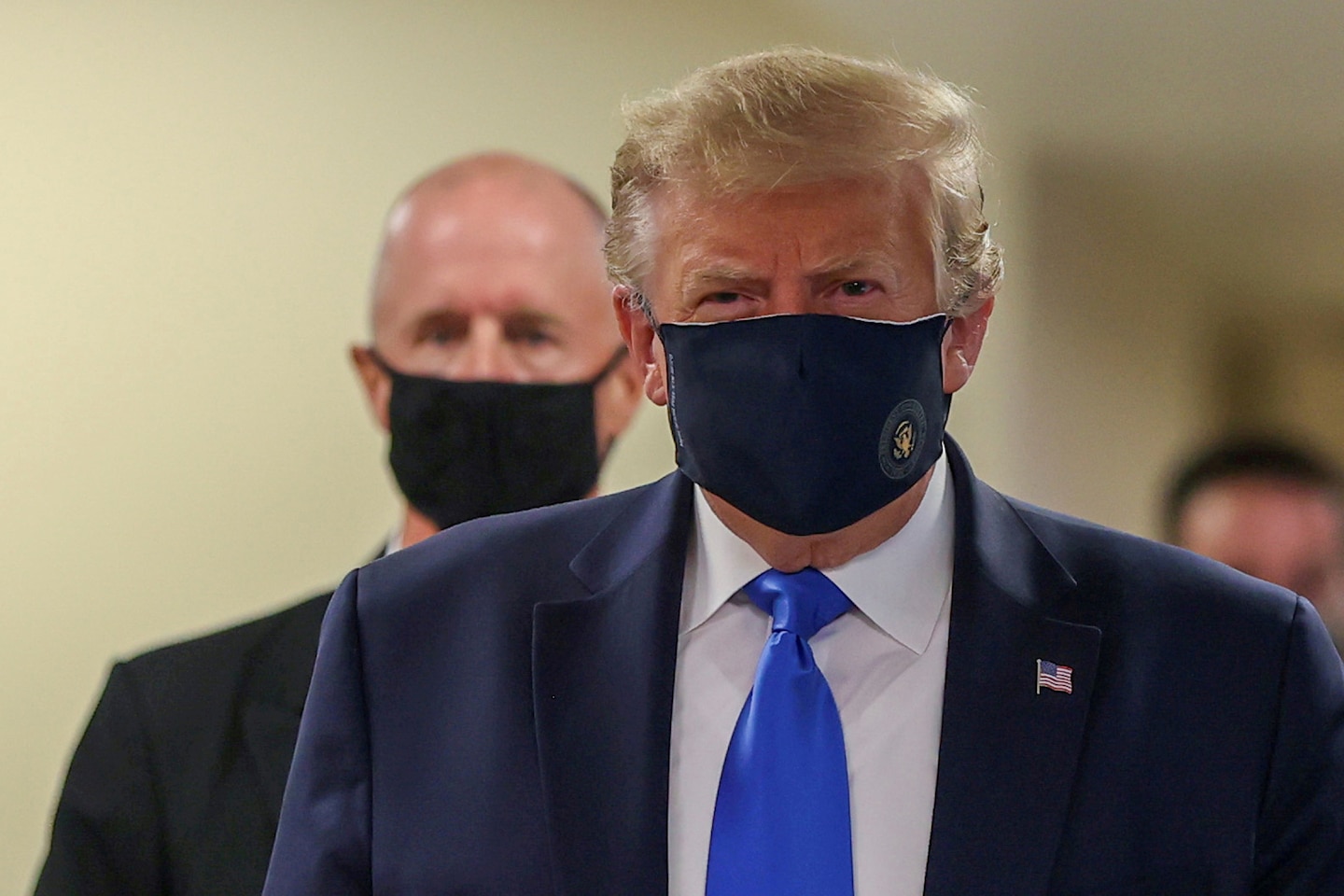 But as recently as late April, Vice President Pence ignored similar policies when he visited the Mayo Clinic and refused to put on a mask.

Meanwhile, governors — including in red states — are urging their citizens to wear masks as a means of bringing the spread under control. Texas Gov. Greg Abbott (R) on July 2 issued an executive order that residents of nearly every county in the state cover their noses and mouths when they are out in public, or face a fine of up to $250.

But Trump has reportedly told aides that he feared following Centers for Disease Control and Prevention guidelines would make him look weak and “unpresidential.” He mocked his poll-leading rival, presumptive Democratic nominee and former vice president Joe Biden, for wearing a mask that was nearly identical (minus the presidential seal) to the one that Trump finally put on Saturday.

The praise that Trump got from his campaign staff for belatedly covering his face is the kind of positive reinforcement that any parent who has ever tried to toilet train a stubborn toddler knows well.

His campaign manager Brad Parscale tweeted a photo of Trump in his mask and added a hashtag: #AmericaFirst. Erin Perrine, a spokeswoman, blasted out another image on her Twitter feed and added: “Rocking a mask like a boss.” From Jason Miller, a senior adviser to the campaign, came yet another with the prediction: “Joe Biden is finished.”

If such fatuousness is what it takes to get the president of the United States to behave as a role model during a deadly crisis, go for it.

Maybe some of his supporters will begin to understand that the virus has no ideology. Our smartest scientists are still learning about this disease, and their recommendations have evolved over the past months. Eventually — and let’s hope it is soon — there will be a vaccine. But for now, sensible policies such as social distancing, frequent hand-washing and, yes, covering our faces are the best means we have for protecting ourselves and others and for stemming the spread of the novel coronavirus to the point where the economy can reopen and stay that way.

Perhaps now that Trump has put on a mask, we may see fewer of those videos that are popping up all over social media in which customers are having temper tantrums in Costco and Target, claiming their freedoms are under assault by store policies that mandate masks. Maybe more people might even start wearing them to the superspreader campaign rallies that Trump remains determined to hold.

Trump has a bit of a history when it comes to being a fashion style-setter. When I interviewed him shortly before the inauguration in 2017, he recalled with pride how the red “Make America Great Again” hats that he personally designed became the emblem of his first presidential campaign. “I didn’t know it was going to catch on like it did. It’s been amazing,” he said. “The hat, I guess, is the biggest symbol, wouldn’t you say?”

He was thrilled when even the New York Times Style section did a feature on them — during Fashion Week, no less. “In the Style section, it was the ornament — what do you call that? — an accessory. They said the accessory of the year. You know the hat. You’d see people going to the fanciest balls at the Waldorf Astoria wearing red hats,” he said.

That wasn’t exactly true. The Times had called them “the ironic must-have fashion accessory of the summer.” Ashley Parker, now my colleague at The Post, wrote that they were favored by hipsters for their “uncanny ability to capture the current absurdist political moment.”

But whatever. I’m hoping that, this summer, Trump will once again ignite a trend. Truth be told, he looked pretty good in that mask.