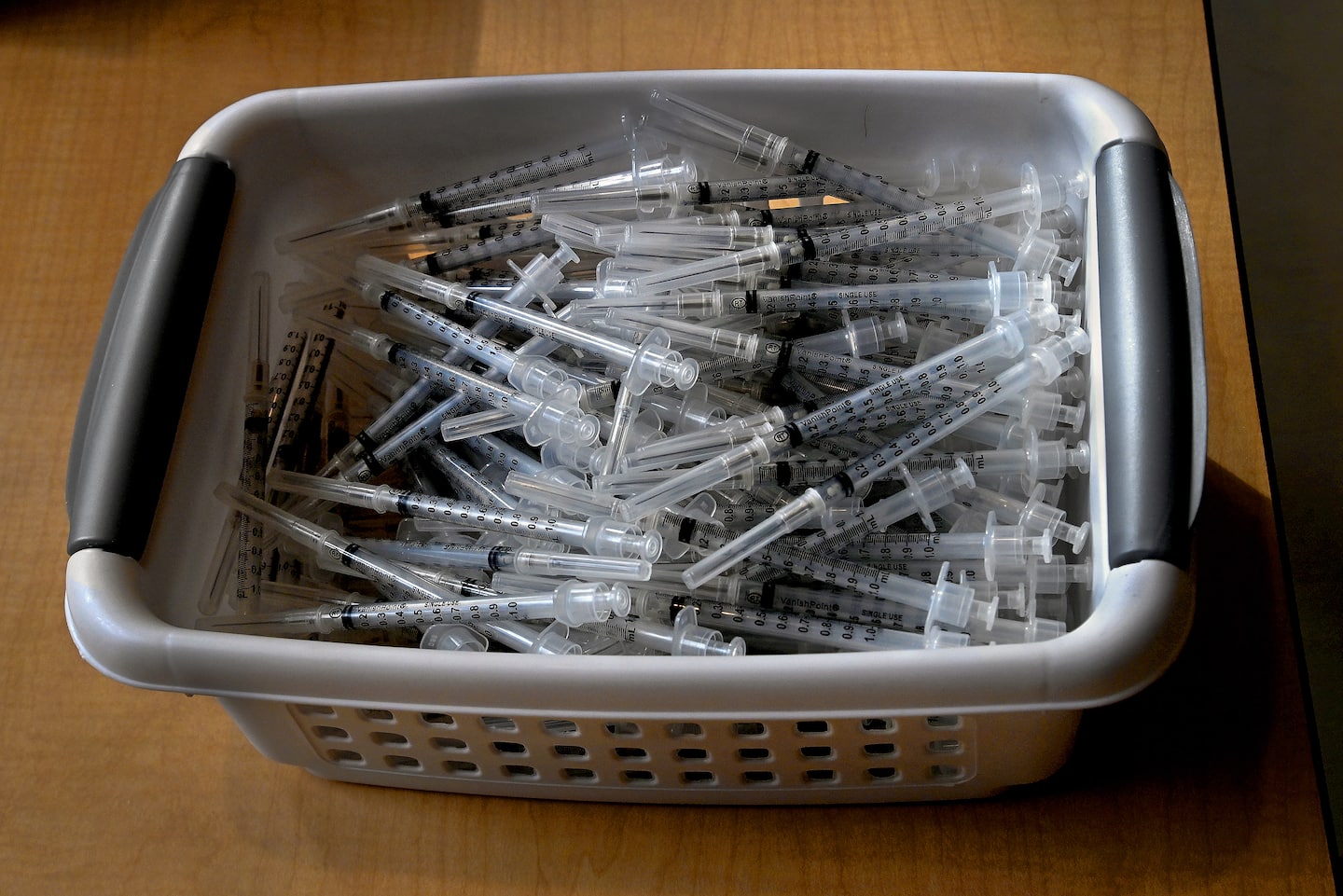 These cases represent a tiny percentage of the 66 million people fully inoculated, and experts say they are neither unexpected nor occurring at an alarming rate. Indeed, the rarity of the breakthrough illnesses in the context of the vast scale of inoculations reinforces the encouraging message from public health experts: These vaccines are highly effective, and their rollout has dramatically driven down the rates of sickness and death among the most vulnerable populations first targeted for inoculations.

“There’s nothing there yet that’s a red flag,” Anthony S. Fauci, President Biden’s chief medical adviser for the pandemic, said at a White House news briefing Friday when asked about the breakthrough cases. “We’re obviously going to keep an eye on that very, very carefully.”

The administration, state health officials and front-line health-care workers face challenges in trying to get a clear picture of these outlier cases: The data is incomplete. Some states have not reported their breakthrough infection numbers to the CDC. Some post-vaccination deaths are still under investigation and may not be caused directly by covid-19, the disease caused by the coronavirus.

Investigators are also hampered by the scattered and often chaotic nature of the pandemic response in the United States. Genomic sequencing is critical to knowing which strain of the virus causes an infection, but positive test samples are often discarded before investigators can retrieve them. Vaccinated people may also be less motivated to get tested if they come down with a case of the sniffles — they might assume it’s just a cold rather than covid-19.

There is no singular explanation for why the virus in rare cases is not neutralized by the vaccine-induced immune response. Infectious-disease experts say the human immune system is complicated, and some people may simply have a weak immune response to the vaccine. In this scenario, it’s not the vaccine that’s the wild card, it’s the patient.

Fauci offered that explanation Friday during the White House briefing. The several deaths reported so far among people already fully vaccinated were among elderly individuals who may have had underlying health conditions and may not have mounted a strong immune response when vaccinated, he said.

“I don’t think there needs to be any concern about any shift or change in the efficacy of the vaccine,” Fauci said.

A less-likely scenario is that mutated variants of the virus are finding ways to evade immunity induced by vaccines. Investigators generally lack comprehensive data matching specific breakthrough infections with specific strains of the virus. Although variants are taking hold in greater numbers across the country, there is no evidence that those variants are a primary driver of breakthrough infections. Nor have officials detected a change in the rate of breakthroughs as the variants have spread.

For the moment, the three vaccines authorized in the United States appear quite effective against all the well-documented variants of the virus in circulation, studies show.

Scientists are investigating the role of variants, but “currently, there is no evidence that Covid-19 after vaccination is occurring because of changes in the virus,” CDC spokeswoman Kristen Nordlund said in a statement.

The investigation of breakthrough cases and any link to specific vaccines or coronavirus variants is hindered by gaps in testing data. Kelly Wroblewski, director of infectious disease for the Association of Public Health Laboratories, said many labs have short retention policies for virus samples — about a week or less.

“You’re out of luck. You just have to hope that the specimen is still available, and that there’s enough quantity and it was stored properly and all these other things,” she said.

Public health labs have been regularly sending information to two main public databases that serve as central repositories for genomic sequences, but they have limited information.

Infectious-disease experts agree on one thing: As long as the virus is circulating easily in communities, everyone should do what it takes to limit transmission and drive down infection numbers.

“There’s nothing surprising about this,” Francis S. Collins, director of the National Institutes of Health, said of the breakthrough infections. “These are still vaccines that are fantastically safe and effective. But 95 percent is not 100 percent.”

He said he fears that people opposed to vaccines will exploit the breakthrough infections to argue the vaccines don’t work.

“Would you stop wearing your seat belt because you heard somebody who was wearing a seat belt got run over by an 18-wheeler and didn’t survive?” Collins asked.

A fundamental goal of mass vaccinations is to create a collective barrier, known as herd immunity, against the spread of the virus. Individuals benefit, too, but they are not entirely immune from infection. Research suggests that vaccinated people are much less likely to pass along the virus if they are infected, but this remains under investigation, and the CDC recommends that vaccinated people continue to wear masks and engage in social distancing when around unvaccinated people who aren’t members of their household.

Breakthrough infections rarely result in severe illness. Randomized clinical trials last year showed that both the Pfizer-BioNTech and Moderna mRNA vaccines had close to 100 percent efficacy at preventing hospitalization, and the vaccine rollout to more than 100 million people has confirmed it. In real-life conditions, the vaccines reduced the risk of infection by 80 percent after one shot, and protection increased to 90 percent after the second dose.

Protection should last for a while. This is a critical issue that had remained speculative in the first months of the pandemic, but has become clearer as people who have been vaccinated are tested for antibodies and other immune-system markers. A study published Tuesday in the New England Journal of Medicine that focused on the Moderna vaccine — but with implications for other vaccines — showed that fully vaccinated people have robust levels of antibodies more than six months later. Those levels subside slowly, which suggests vaccine-induced immunity should be long-lasting. Exactly how long remains to be seen.

Although the CDC has not released national data on breakthroughs, states have started to make public what they’re seeing.

In Washington state, officials have identified 102 breakthrough cases among more than 1 million people vaccinated between February and March 20, a markedly small percentage, said Umair Shah, the state health secretary. Of 102 cases, eight involved people who were hospitalized, and two others — elderly residents of long-term care facilities — died. The majority had only mild symptoms, if any.

“Look, we have been vaccinating over 1 million people, and we know vaccines aren’t 100 percent, and it’s not surprising you would get breakthrough infections,” Shah said.

Maine has fully vaccinated 340,301 people, and 62 cases of breakthrough infections have been reported, including one person in hospice care who died, said Nirav D. Shah, director of Maine’s Center for Disease Control and Prevention. Maine is sequencing cases when possible, but officials are not always able to obtain the genetic material, he said. Officials have not detected any discernible pattern.

“We’re sequencing because that’s what science does,” Shah said, “not because we are seeing signs of erosion of vaccine efficacy. … 99.981 percent of people vaccinated have not experienced a breakthrough.”

In South Carolina, state officials had fully vaccinated more than 560,000 people and reported 141 breakthrough infections as of April 5. In Nevada, 58 cases have been reported in the more than half-million fully vaccinated people, according to health department data.

Oregon health authorities had identified 168 cases through April 2, including three deaths, among more than 700,000 vaccinated people. Many had asymptomatic infections; 19 were hospitalized, and most were in people older than 65 or with underlying health conditions.

Michigan reported this week that, since vaccinations began, 246 fully vaccinated people tested positive for the coronavirus and three died. Those Michigan cases were among 1.7 million people vaccinated.

Beaumont Health, which runs eight hospitals in the Detroit area, is tracking 161,000 vaccinated patients and trying to discern how many have had breakthrough infections. Nicholas Gilpin, system medical director for infection prevention at Beaumont, said it has been difficult to obtain genetic sequencing of the virus samples from the breakthrough cases. But he noted that the breakthrough cases are rarely serious.

“The ones who are sick enough to warrant hospitalization, you can count them on one hand,” Gilpin said.

The key number when it comes to breakthroughs, experts say, is the denominator — the huge number of people now inoculated.

“It’s not at all surprising that in a population of hundreds of millions of people that there would still be people who get infected, who suffer mild or moderate disease,” said Paul A. Offit, director of the Vaccine Education Center at Children’s Hospital of Philadelphia. “What you worry about are the people who, despite being immunized, become hospitalized or die.”

Offit and others are keeping a close eye on the mutated variants, which could mutate further. His bigger concern involves the attitudes of the public.

“What worries me more than the variants are those who choose not to vaccinate,” Offit said.