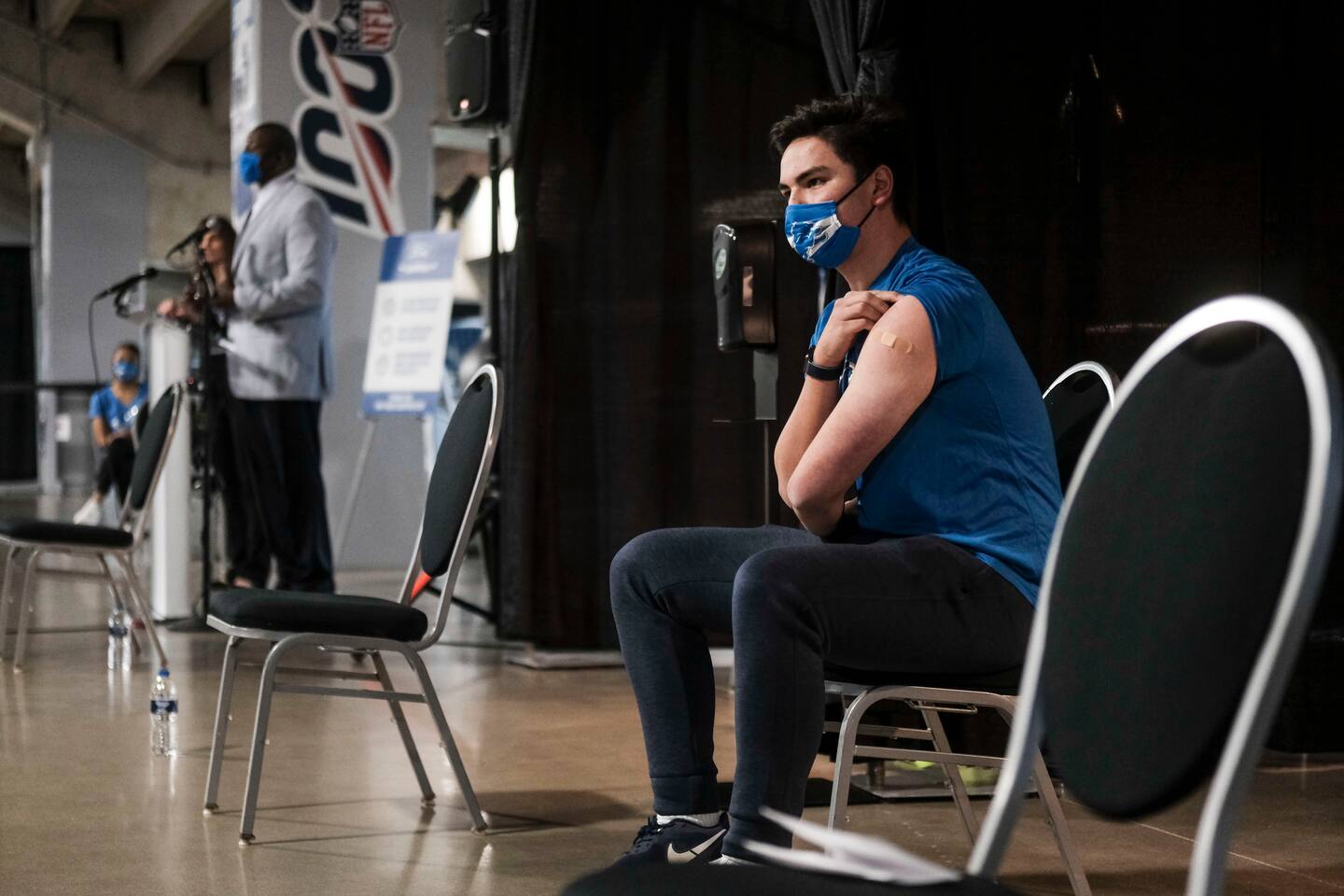 When Michigan Gov. Gretchen Whitmer (D) last week asked White House officials if they would consider sending more vaccine doses to her state during a deadly surge, the state had not ordered 360,000 doses then available, puzzling federal officials who instead advised her to work with experts to make sure Michigan’s supply was being deployed effectively.

But Michigan wasn’t the only state leaving doses on warehouse shelves. At one point last week, 13 states had more than 100,000 doses apiece available and not ordered, according to a federal official familiar with the figures who, like others, spoke on the condition of anonymity because of the matter’s sensitivity. Indiana had only pulled down 90 percent of doses available to the state, leaving 306,000 on the shelves. Texas had ordered 95 percent of its share, leaving 673,000 doses temporarily untouched.

The delays have gained notice inside the federal government, where officials have discussed whether performance metrics, including how quickly states are ordering and using their vaccine doses, and getting them to vulnerable groups, should be part of allocation decisions, according to three people familiar with the issue. Any new approach, however, would need sign-off from the White House, which has been at pains to avoid the appearance of penalizing some states while boosting others, including by directing additional doses to virus hot spots.

“The fair and equitable way to distribute the vaccine is based on the adult population by state, tribe and territory,” Jeff Zients, coordinator of the White House’s coronavirus task force, said during a Friday briefing. “That’s how it’s been done. And we will continue to do so. The virus is unpredictable. We don’t know where the next increase in cases could occur.”

Experts argue that four months into the immunization campaign, and with more transmissible variants of the virus spreading throughout the country, states should no longer be encountering bottlenecks preventing them from making use of their full vaccine allotments.

“States and their health-care providers need to have the capacity at this point to deliver the vaccine doses available to them each week,” said Jason L. Schwartz, an assistant professor of health policy at Yale University and a member of Connecticut’s vaccine advisory committee. “We shouldn’t be leaving vaccine doses on the table during this time.”

State and county officials offered different explanations for not ordering their full allocations each week. Many cited the difficulty of matching first and second doses. “We don’t always order all second doses as they may not be needed that week, based on when first doses were used,” said Lynn Sutfin, a spokeswoman for the Michigan Department of Health and Human Services.

Others pointed to reduced demand, staffing challenges and inadequate communication between state and local officials. Mouhanad Hammami, director of the Wayne County Health Department in Michigan, said a sharp and unexplained drop-off in the county’s share of Moderna doses meant it couldn’t operate one of its clinics, ordinarily capable of administering 2,000 doses per day to people in the Detroit area.

Sarah Verschoor, a spokeswoman for the Indiana Department of Health, said doses not ordered had been “earmarked for businesses, higher education and local health department clinics that are set to start vaccinating in the coming days.” Chris Van Deusen, a spokesman for the Texas Department of State Health Services, said last week that the state’s balance would be gone by last Friday, by which time orders for second doses would be placed. But 145,000 doses remained at week’s end.

In North Carolina, which ended last week with 426,000 doses not ordered, state health officials did not respond to requests for comment. All state residents 16 and older became eligible for the shots on Wednesday. Lisa Macon Harrison, health director for Granville Vance Public Health in the northern part of the state, said orders dipped last week because of spring break.

“This past week was spring break for a lot of communities, and teachers and students and nurses alike had a little break planned,” she said. “In some places, school nurses were not available [to administer shots], and staffing levels across the nation were going to look a little different.”

Michael Fraser, chief executive of the Association of State and Territorial Health Officials, said some states not ordering their full allocations are experiencing soft demand and are developing new strategies to boost interest in the shots. He argued it was too soon to redistribute doses among states.

But ordering delays related to second doses could propel calls for the United States to delay booster shots, as Britain and Israel have done, to ease logistical challenges and give more people some protection. Uncertainties about how much protection first doses offer and how quickly that benefit is conferred also go to the heart of the intensifying debate over whether the federal government should surge vaccine to hot spots. Some argue immunity would not kick in fast enough to help contain the outbreaks, making mitigation strategies a better bet.

“The downside is if the surge is happening now, we know that even with a single dose of Johnson & Johnson, immunity doesn’t really kick in for two to four weeks, while for Pfizer and Moderna, you’re looking at more of a five- to six-week timeline,” said Anuj Mehta, a Denver pulmonologist who chaired Colorado’s advisory group on vaccine prioritization. “And that’s not going to do anything to help the surge.”

B. Keith English, chair of Michigan State University’s Department of Pediatrics and Human Development, disagreed about that time lag, pointing to a “big falloff in symptomatic cases a couple weeks after the first dose.”

Just as important as surplus doses, he said, is the efficient allocation of doses the state already has available. Where rapid vaccination may be most beneficial is in areas adjacent to outbreaks, such as Washington state, where officials are closely watching a record-breaking surge in British Columbia, even though the U.S.-Canada border remains closed to nonessential travel.

Umair Shah, the state health secretary, said Washington state is not yet receiving sufficient supply to target particular areas of the state and such an approach might undermine the ongoing effort to inoculate more of the elderly population. The path of the virus is unpredictable, he said, and a population-based approach is still fairest nationwide as well as within states.

Pressure on the federal government to rethink its strategy has mounted as access to immunization expands nationwide but new infections are concentrated in just a handful of states, including Michigan, New York, New Jersey, Florida and Pennsylvania. Michigan’s seven-day average of new infections rose from 1,503 on March 7 to 7,609 Friday, according to data analyzed by The Washington Post.

The White House’s response to Whitmer last week was echoed Thursday by President Biden, who told her in a call that the federal government stood ready to dispatch additional vaccinators to her state to help make use of its supply, according to an administration official with knowledge of the conversation. As for the recommendation to move around vaccine within the state, Whitmer told reporters Friday, “We have done some of that. The problem is when you look at the map, the whole state is a hot spot.”

Early on, officials had considered but not pursued “local spread/prevalence of covid-19” as a factor in vaccine allocations, according to a memo distributed last year by the National Association of County and City Health Officials and confirmed by a federal health official involved in the deliberations. Some senior Centers for Disease Control and Prevention officials were doubtful of a strict pro rata approach from the start, according to two officials, with one saying the formula shortchanged large urban areas where people flock for health care even if they live elsewhere.

Federal officials believe one of the reasons states are leaving vaccine on the shelves is their reluctance to order shots they can’t immediately put into arms, either because of limited capacity to administer them or flagging demand. Sending out doses that aren’t quickly administered would push states down in closely watched rankings of vaccination efficiency — which have not been used to determine allocations but nonetheless matter to state officials, who have griped to federal counterparts about the public backlash from the numbers, according to people familiar with the discussions.

Kansas Health Secretary Lee Norman said his state has ordered all of its doses but that some of his counterparts discussed not doing so during a recent call among state health officers.

Days before leaving office in January, Trump administration officials had unveiled an incentive system that would have rewarded states with additional shots if they quickly used their supply. The Biden administration scrapped that approach and instead retained a population-based formula, even as it gradually directed more vaccine doses to retail pharmacies, community health centers and federally run mass vaccination sites. These locations are selected in part because they’re likely to serve communities of color that are disproportionately affected by the pandemic, administration officials say.

Enlarged allotments to pharmacies are also politically fraught because they’re seen as reducing the share of doses made available to governors, who have touted increased allocations to constituents. However, doses directed to pharmacies generally have been administered more efficiently.

Zients told governors on a recent call that states had on average administered about 80 percent of the doses sent to them, while pharmacies were performing slightly better, at 84 percent, according to a recording of the conversation obtained by The Post. There was wide variation among states, Zients said, with the top 10 states averaging about 90 percent and the bottom 10 administering about 71 percent of the doses delivered to them.