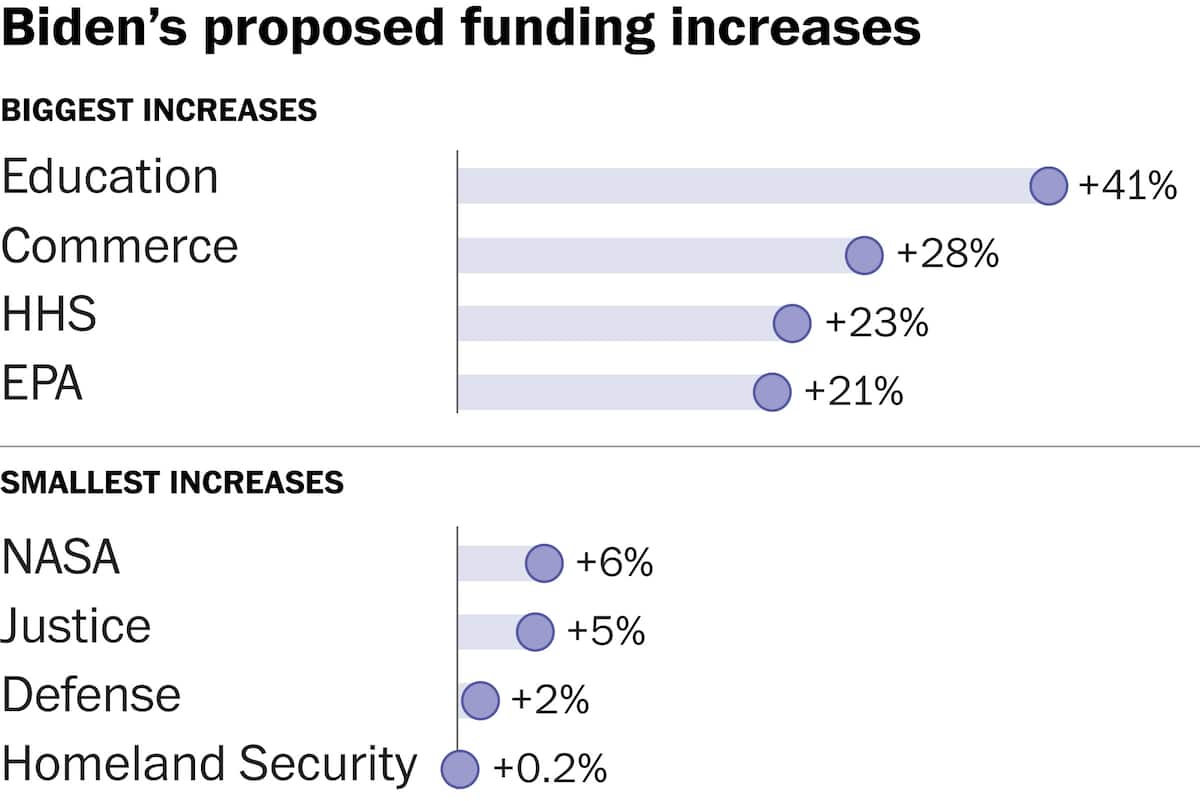 The Biden administration is seeking massive funding increases toward education, health and the environment, while maintaining current spending levels on defense and homeland security, according to a budget request unveiled Friday. The release begins the annual negotiation process between the president and Congress to determine how funds should be distributed across the government.

Proposed changes to base discretionary funding in Biden’s budget

President Biden’s budget would increase spending by more than 10 percent in 11 of the 15 Cabinet departments. This is a dramatic change from President Donald Trump’s proposals, which often sought to cut spending. Included in most departments’ spending increases is money to address climate change.

The budget document includes an array of proposals specifically aimed at helping vulnerable populations, including resources for high-poverty schools, vouchers to reduce homelessness and money to combat the opioid epidemic.

The budget plan includes discretionary spending only — the portion of government spending that is set by annual appropriation acts. Excluded is mandatory spending, such as Social Security, Medicare and Medicaid. Biden is expected to release a full budget later this spring.

Don’t expect this exact budget proposal to become reality. While Democrats control both the Senate and the House, their margins are slim, so there’s sure to be debate and compromise about where to spend the money and how much the government should grow.

Biden’s plan is not just a departure from the cuts that Trump sought. For many departments, it also represents a much larger spending increase than what Obama sought for most of his presidency.

For some notable departments, here’s how the past 13 presidential budgets compared in proposed vs. enacted spending.

For Defense, Biden’s ask is below both Obama’s and Trump’s, while for international funding and the EPA he falls short of the monumental requests that Obama made in his first budget.

Here are more details about what’s in each agency’s proposal.

The proposal also includes a $1 billion increase in nutritional safety net programs, additional funding for initiatives in the March stimulus bill and money toward some of the priorities laid out in the American Jobs Plan.

The big increase in spending for the Commerce Department would be spread across a number of programs, including research into climate change.

The White House wants a large increase for Commerce’s National Oceanic and Atmospheric Administration to go toward climate research and helping regional and local leaders with “climate data and tools.”

It also seeks to boost Commerce’s ability to help U.S. companies develop semiconductors and other items that the White House believes are of strategic national importance. And there’s a large proposed increase in a program that aims to assist minority-owned businesses.

The proposal for the Pentagon actually represents a slight decrease of about 0.4 percent when adjusted for inflation. The proposal is likely to draw barbs from Republicans, who want increases of 3 to 5 percent annually to upgrade the military, citing the U.S. military competition with China.

Liberal Democrats had called for cuts of at least 10 percent in defense spending, while the Trump administration had forecast spending $722 billion on defense if Donald Trump were reelected.

The increase of $20 billion for the Title I program represents a historic increase for a program that funnels federal dollars to schools serving a significant number of children in poverty. The proposal would more than double funding for the program, to $36.5 billion. That falls short of Biden’s campaign promise to triple spending on the program. Still, it would represent a huge increase, particularly because it comes on top of the rescue act, which just pumped $122 billion to K-12 schools, most of it allocated by the Title I formula.

On higher education, Biden had promised to double Pell Grants, which help low- and moderate-income students pay for college. His proposal for a $400 increase to the maximum award, now at $6,495, falls far short of that. But it would increase spending on the program, now at about $30 billion, by $3 billion. He also would make “dreamers,” who came to the country illegally as children, eligible for the program.

The White House wants to boost resources for the department with a sprawling portfolio that includes conducting physics experiments, running supercomputers and researching alternative forms of producing energy. But the bulk of the department’s budget goes to maintaining the nation’s nuclear weapon arsenal.

Biden is proposing a big funding increase to the agency that will be at the center of his administration’s fight against climate change and the disproportionate impact pollution has on poor and minority communities.

The boost stands in contrast to the deep budget cuts proposed under Trump, who tried unsuccessfully to eliminate several dozen agency programs altogether. Yet even under President Barack Obama, the EPA’s budget remained stagnant as gridlock gripped Congress.

Biden has argued that the coronavirus outbreak has demonstrated the need to robustly fund the nation’s public health response.

The administration would make new investments to fight the opioid epidemic after drug-related overdose deaths spiked during the pandemic and to ramp up the response to ongoing public health challenges like HIV/AIDS.

The budget also calls for new investments in programs to address racial disparities in health care, reduce the risks of childbirth and support survivors of domestic violence.

Biden’s proposal for HUD signals a new era for the embattled agency, whose funding and mission to serve America’s poor was consistently threatened under the Trump administration.

HUD Secretary Marcia L. Fudge said Biden’s funding request “turns the page on years of inadequate and harmful spending requests and instead empowers HUD to meet the housing needs of families and communities across the country.”

It provides more money for liberal priorities: more climate science, increased education and law enforcement on tribal lands and an expansion of access to national parks, as well as historical sites, for racial minorities to tell the story of civil rights and human rights struggles.

The Biden administration is seeking a major budget increase for the State Department and other international programs in an effort to revitalize Washington’s diplomatic muscle after what it calls “four years of neglect” by the Trump administration.

The Biden administration is proposing new programs to spur rail trips between cities and promote equity in transportation, part of a budget request it described as a “down payment” on its broad aspirations for transforming the nation’s infrastructure to improve quality of life and address climate change.

It marks a major shift in emphasis from Trump administration proposals to cut discretionary spending and privatize transportation assets.

The increase in Treasury’s budget would seek to allow the Internal Revenue Service to increase audits of tax returns for wealthier Americans and corporations and boost enforcement. Additional money would also be used to expand customer service, both over the phone and in person.

The Department of Veterans Affairs would continue to receive spending increases the agency received during the Trump administration, this time with a major boost that includes new money for suicide prevention, women’s health, assistance to homeless veterans and research on toxic exposures.

Including mandatory spending, the total budget for VA would exceed $250 billion.