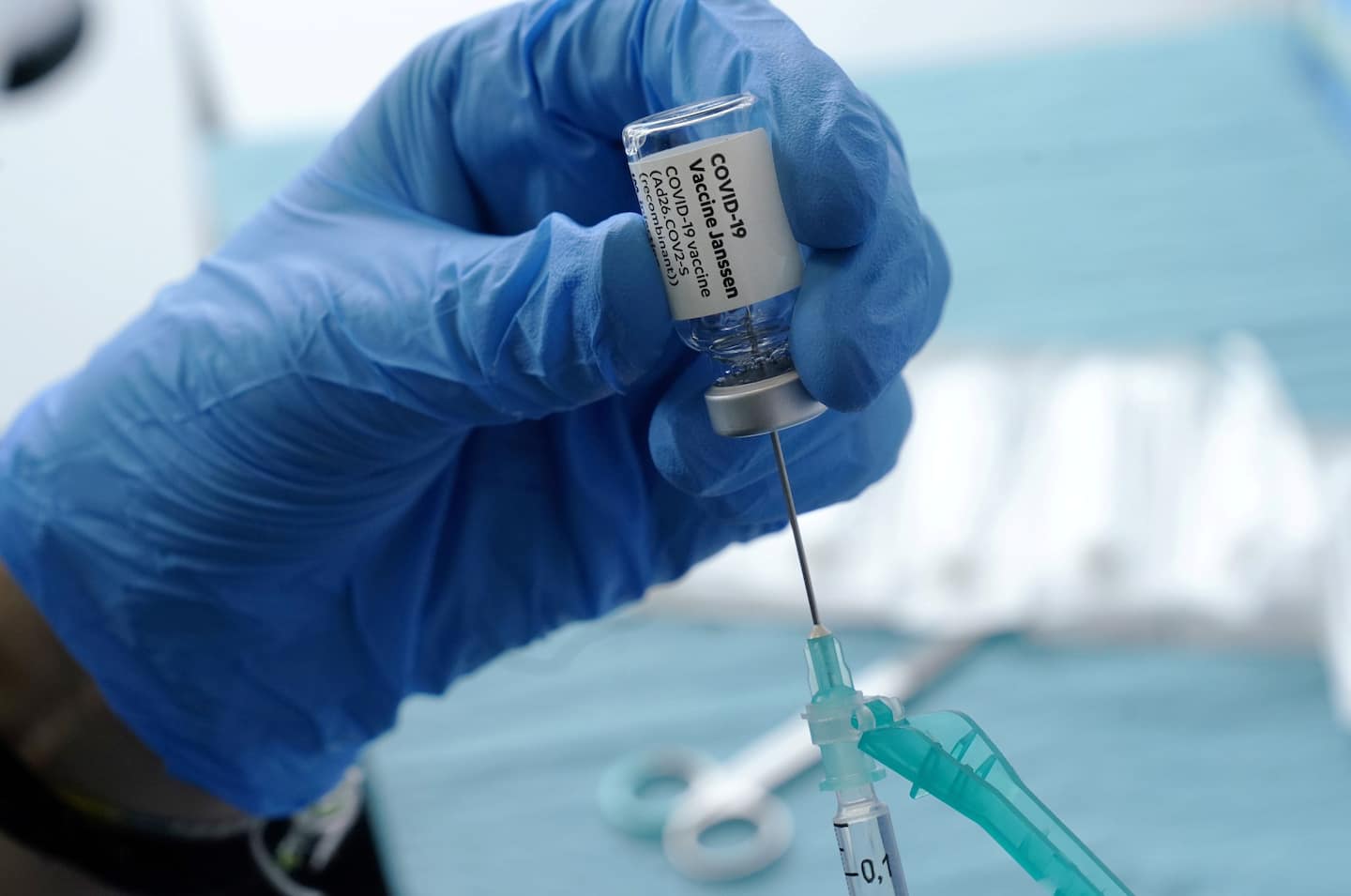 The decision to lift the pause allows state and local officials to resume giving the vaccine they have available on shelves immediately, CDC officials said. The CDC and FDA will publish education and communication materials and updated patient fact sheets by early next week.

The agencies had paused the use of the Johnson & Johnson vaccine last week because of reports of six cases of blood clots among the millions of people who had received the vaccine in the United States.

The announcement Friday evening followed an all-day meeting of an independent advisory panel to the CDC that recommended inoculations with the Johnson & Johnson vaccine should restart. The panel said the benefits outstrip the risks even as it heard about an additional small group of recipients who developed blood clots.

The Johnson & Johnson vaccine “can be reinstituted and should be reinstituted. I acknowledge, as does everyone else, that these events are rare, but serious,” Jose Romero, chair of the committee, said. “It is our responsibility as clinicians to make sure that women understand this risk and, when possible, that they have an alternative at the same site that you’re administering the vaccine.”

The FDA and Johnson & Johnson are updating the vaccine’s label to carry a warning about a rare risk of blood clots paired with low counts of platelets, blood cells involved in clotting.

In a statement, the FDA and CDC said the agencies have confidence that the vaccine is safe and effective.

Janet Woodcock, acting FDA commissioner, said the agencies lifted the pause based on FDA and CDC reviews of all available data and in consultation with medical experts and based on recommendations from the advisory committee.

“We have concluded that the known and potential benefits of the [Johnson & Johnson] COVID-19 vaccine outweigh its known and potential risks in individuals 18 years of age and older,” she said in a statement. “We are confident that this vaccine continues to meet our standards for safety, effectiveness and quality.”

Walensky, in a statement, said the agencies “identified exceptionally rare events … and we paused to examine them more carefully. As we always do, we will continue to watch all signals closely as more Americans are vaccinated. I continue to be encouraged by the growing body of real-world evidence that the authorized COVID-19 vaccines are safe and effective, and they protect people from disease, hospitalization, and death.”

The CDC advisory committee, which reconvened Friday to discuss next steps for the Johnson & Johnson coronavirus vaccine, heard data about 15 confirmed cases of the rare and severe blood clots that prompted federal officials to recommend last week that states pause use of the vaccine.

All of the committee members said the benefits far exceed the risks, but several members expressed concern that people receiving the vaccine will not be sufficiently informed of the rare but potential danger or that there are other vaccine options. There was a debate about whether to add an additional warning targeting women under 50.

“I voted yes, but I am concerned that consumers and women in this age group, in particular, will not be adequately informed just by the FDA [emergency use authorization] fact sheet,” said Beth Bell, a clinical professor in the department of global health at the University of Washington.

“This is an age group that is most at risk, that is getting this vaccine predominantly to save other people’s lives and morbidity, not their own. … And if they choose to be vaccinated with this anyhow, we want to respect that choice. But I’m very sorry that we haven’t chosen to put upfront the knowledge that we have that is unique,” said Sarah Long, a professor of pediatrics at Drexel University College of Medicine.

All the blood-clot cases were in women, including three who died and seven who remain in the hospital. The 15 cases mostly involved brain clots in women between 18 and 59. The 15 cases were identified among nearly 8 million doses of the vaccine administered as of April 21.

CDC officials who presented the data Friday said it was too early to conclude that the incidents affected only women and said a few cases in men were being reviewed.

The panel was reviewing the data as part of the next steps for the vaccine after the CDC and the FDA recommended a temporary halt April 13 in giving the vaccine following initial reports of blood clots in those six women.

By lifting the pause and adding the FDA warning, the U.S. position would be similar to one taken by Europe’s drug regulator. The European Medicines Agency said this week that the Johnson & Johnson vaccine should carry a warning but placed no restrictions on its use. The European agency said the shot’s benefits continue to outweigh the risks.

Paul Stoffels, chief scientific officer for Johnson & Johnson, thanked the advisory committee for its “rigorous evaluation” and called it an “essential step toward continuing urgently needed vaccinations in a safe way for millions of people in the U.S.”

The rarity of the cases had persuaded many federal officials that the complication can be addressed by adding a warning that describes the groups at higher risk for the adverse event, and by working to ensure that doctors know how to identify and treat the problem.

People who have received the Johnson & Johnson vaccine and develop severe headaches, abdominal pain, leg pain or shortness of breath within three weeks after vaccination should contact their medical provider. Most notably, physicians are advised to avoid using heparin, a common treatment for blood clots, because it can exacerbate the vaccine-related condition.

Experts have said the risk of developing a clot after receiving the vaccine appears far lower than the chance of a clotting issue caused by hormonal birth control, such as oral contraceptives.

There was an initial concern that people with the condition might be treated with the anticoagulant heparin, which can worsen it. One reason for the pause was to alert health officials to use similar non-heparin drugs and intravenous immunoglobulin.

Company officials argued that vaccinations could be restarted with a warning label about the rare risk, and presented proposed warning language that the company had drafted in consultation with the FDA. They argued against age restrictions on who should receive the vaccine.

“Our concern is that with the restrictions, it’s not just about delaying vaccination, but potentially leaving unvaccinated a portion of the United States. And if the unvaccinated population is large enough, then we put at risk reaching herd immunity,” said Joanne Waldstreicher, chief medical officer of Johnson & Johnson. “A restriction in use here could have a negative impact on the success of achieving global herd immunity.”

In the six cases initially identified, the vaccine recipients developed symptoms, most often headaches, six to 13 days after vaccination. One vaccine recipient, a Virginia woman, died in March. In all cases, the clots were seen in combination with low levels of blood-clotting cells, known as platelets, a condition known as thrombocytopenia.

All six original cases were White women, and only one was taking hormonal contraceptives that can cause blood clots, suggesting that was not the reason for the condition.

Some of the six women had blood clots in other parts of their body, and CDC officials said last week the agency would cast a wider net, looking for clotting accompanied by low levels of platelets. Four of the recipients of the Johnson & Johnson vaccine were treated initially with heparin, an anticoagulant that is not recommended because the events closely resemble an immune-triggered reaction to the drug that could worsen the clots.

Johnson & Johnson presented data on two other cases of clots in people who received the vaccine during a clinical trial, one of whom was a 25-year-old man with a hallmark of the symptoms.

Peter Marks, director of the FDA’s Center for Biologics Evaluation and Research, said officials want to “find the sweet spot where people have the information they need to make an informed choice on benefits and risks. … The way the FDA is seeing it, the overall benefit and risk here remains favorable.”

European data on the people who suffered similar reactions after receiving the AstraZeneca vaccine showed that although women were at greater risk, they weren’t exclusively at risk.

The Johnson & Johnson vaccine, which was authorized for adults 18 and over, was a large part of the U.S. and global vaccination strategy. It has clear practical and logistical advantages over the other two authorized vaccines in the United States — it does not have to be kept frozen, and requires just one dose. That makes it particularly useful for rural areas and other hard-to-reach communities, and for distribution to community health centers and physician offices that might not have the freezers needed for the other vaccines, public health officials say.

Most of the more than 210 million shots administered in the United States have been made by Pfizer-BioNTech and Moderna using a different technology.

South Africa announced Thursday it will resume using the Johnson & Johnson vaccine to immunize health-care workers against the coronavirus after the country suspended the vaccination program when U.S. officials reported the rare blood clots. There have been no incidents of blood clots reported in South Africa.

About 290,000 of South Africa’s 1.2 million health workers have been given the Johnson & Johnson vaccine in a study that is evaluating the vaccine before a mass rollout to combat an aggressive variant detected in the country last fall.

Laurie McGinley contributed to this report.