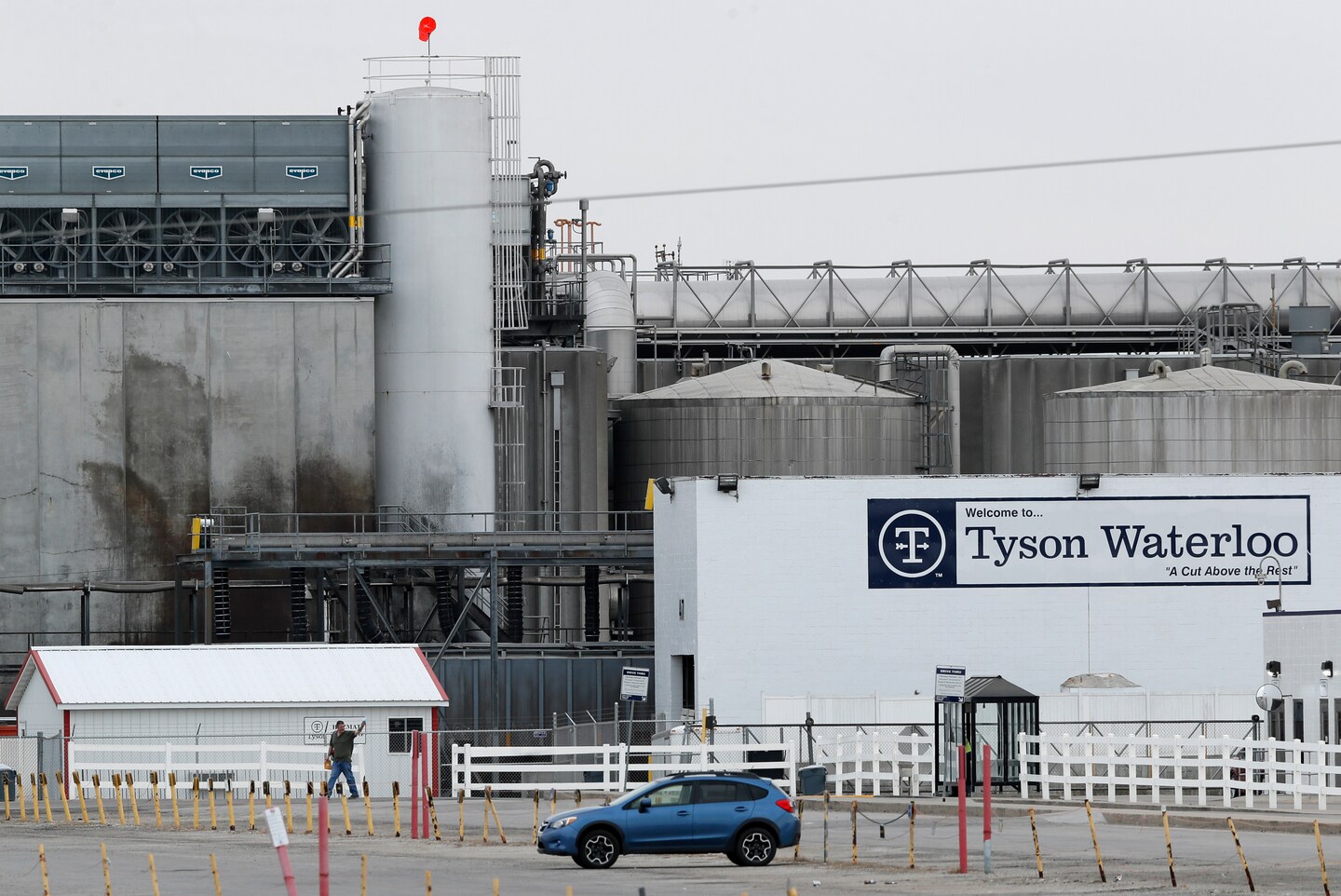 The biggest players in the U.S. meat industry pressed “baseless” claims of beef and pork shortages early in the pandemic to persuade the Trump White House to keep processing plants running, disregarding the coronavirus risks that eventually killed at least 269 workers, according to a special House committee investigating the nation’s pandemic response.

In a report released Thursday, the committee alleges that Tyson Foods’s legal team prepared a draft with input from other companies that became the basis for an executive order to keep the plants open that the Trump administration issued in April 2020, making it difficult for workers to stay home.

“Meatpacking companies knew the risk posed by the coronavirus to their workers and knew it wasn’t a risk that the country needed them to take,” according to the report by the select subcommittee on the coronavirus crisis. “They nonetheless lobbied aggressively — successfully enlisting [the U.S. Agriculture Department] as a close collaborator in their efforts — to keep workers on the job in unsafe conditions, to ensure state and local health authorities were powerless to mandate otherwise, and to be protected against legal liability for the harms that would result.”

The report alleges the nation’s largest meatpackers and industry trade groups repeatedly misled the public when they warned that any slowdown in their operations posed an imminent threat to the nation’s meat supplies. But “these fears were baseless,” investigators wrote.

The report from the bipartisan House select subcommittee is based on a review of 151,000 pages of documents, more than a dozen survey calls with industry union representatives, former Agriculture Department and Occupational Safety and Health Administration officials, and state and local health authorities. The subcommittee also held a staff briefing with OSHA and the USDA.

Internal industry documents showed that “despite awareness of the high risks of coronavirus spread in their plants, meatpacking companies engaged in a concerted effort with Trump Administration political officials to insulate themselves from coronavirus-related oversight, to force workers to continue working in dangerous conditions, and to shield themselves from legal liability for any resulting worker illness or death,” the report states.

Gary Mickelson, Tyson’s director of public relations, said that the company has worked with government officials at many levels in both the Trump and Biden administrations as it navigated the pandemic.

“This collaboration is crucial to ensuring the essential work of the U.S. food supply chain and our continued efforts to keep team members safe,” Mickelson said in a statement. “For example, last year Tyson Foods was supported by the Biden Administration as we became one of the first fully vaccinated workforces in the U.S. Our efforts have also included working cooperatively and frequently with local health department officials in our plant communities.”

Jim Monroe, Smithfield’s vice president of corporate affairs, said that the company has invested more than $900 million to support worker safety, including paying workers to stay home, and have exceeded guidelines set forth by the U.S. Centers for Disease Control and Prevention and OSHA.

“The meat production system is a modern wonder, but it is not one that can be re-directed at the flip of a switch,” Monroe said in a statement. “That is the challenge we faced as restaurants closed, consumption patterns changed and hogs backed-up on farms with nowhere to go. The concerns we expressed were very real and we are thankful that a true food crisis was averted and that we are starting to return to normal.”

An estimated 334,000 coronavirus cases nationwide have been tied to meatpacking plants, resulting in more than $11 billion in economic damage, according to research from the University of California at Davis. Researchers found that per capita infection rates in counties that housed beef- and pork-processing facilities were twice as high. In counties with chicken-processing facilities, the transmission rate was 20 percent higher.

Publicly, meat industry lobbyists and executives raised alarms about the threat that plant closures would present to the nation’s food supply chain. The concerns about worker absenteeism hampering production came as the virus first swept across the country, and the government unleashed an unprecedented flood of unemployment benefits to support workers.

“The food supply chain is breaking,” John H. Tyson, chairman of Tyson’s board, wrote in a full-page newspaper ad that ran in The Washington Post, the New York Times and the Arkansas Democrat-Gazette in April 2020.

“We have a responsibility to feed our country,” the ad said. “It is as essential as health care. This is a challenge that should not be ignored. Our plants must remain operational so that we can supply food to our families in America.”

But that same month, U.S. pork exports were at a three-year high, the report found. In the first three quarters of 2020, JBS exported 370 percent more pork to China than it had in the same period of 2017; Smithfield reported a 90 percent increase during the same window.

“These employers must be held accountable for the consequences of their blatant disregard of the safety and lives of their employees,” Stuart Appelbaum, president of the Retail, Wholesale and Department Store Union, said Thursday in a statement. “Today’s report is just one step towards accountability, but much more must be done to prevent corporations from putting profits over people’s lives in the industry.”

At least 59,000 workers at Tyson Foods, Smithfield Foods, JBS, Cargill and National Beef — companies that control most of the U.S. meat market — fell ill with the coronavirus in the pandemic’s first year, the subcommittee previously found. At least 269 industry workers died between March 1, 2020, and Feb. 1, 2021.

“In 2020, as the world faced the challenge of navigating COVID-19, many lessons were learned and the health and safety of our team members guided all our actions and decisions,” said Nikki Richardson, head of communications for JBS USA. “During that critical time, we did everything possible to ensure the safety of our people who kept our critical food supply chain running.”

Cargill told The Post it has worked hard to maintain “safe and consistent operations” throughout the pandemic.

“At the same time, we have not hesitated to temporarily idle or reduce capacity at processing plants when we determined it necessary to do so,” Cargill said in a statement. “The well-being of our plant employees is integral to our business and to the continuity of the food supply chain.”

National Beef did not immediately respond to a request for comment.

To keep production humming while business activity around the world ground to a halt, meatpacking companies and the USDA “jointly lobbied the White House to dissuade workers from staying home or quitting,” the report found.

In April 2020, chief executives from Tyson, JBS USA, Smithfield Foods other meatpacking companies had a call with Agriculture Secretary Sonny Perdue, in which they asked him to “elevate the need for messaging about the importance of our workforce staying at work to the [president] or [vice president] level,” and separately stressed the need to make clear that “being afraid of COVID-19 is not a reason to quit your job and you are not eligible for unemployment compensation if you do.”

Soon after, in a news conference, Pence issued a “direct message to meatpacking workers” that “we need you to continue … to show up and do your job,” admonishing recent “incidents of worker absenteeism,” the report states.

Tyson’s legal team drafted the proposal for the executive order that companies used as justification for keeping plants open, the investigation found, and the final version “adopted the themes and statutory directive laid out in Tyson’s draft, invoking the Defense Production Act to ensure meatpacking plants “continue operations.”

“In the days leading up to President Trump’s issuance of the Executive Order, meatpacking industry representatives and companies — Smithfield and Tyson in particular — engaged in constant communications with Trump appointees at USDA, the National Economic Council, and the White House,” the report notes, including “calls between Smithfield CEO Ken Sullivan and White House Chief of Staff Mark Meadows; a joint call with Sullivan, Meadows, and Tyson CEO Noel White; a call between White and Vice President Pence’s Chief of Staff Marc Short; and a call from Meadows to White asking if White would be willing to meet with President Trump.”

In a statement to The Post, Short said that he was “proud our office stood with wage earners and job creators as government bureaucrats attempted to take actions that would cause further panic, create food shortages, and further cripple the economy — a stance that has been proven correct over and over as the pandemic has dragged on.”

Perdue declined to comment on the report, and Pence did not immediately respond to a request for comment.

The day after the executive order, the Trump White House allegedly “requested” that the companies “issue positive statements and social media” about the president’s action on behalf of the industry, according to the report.

In December, as President Biden’s White House sought to crack down on decades-high inflation, it published a briefing about the meat industry, alleging companies had abused their market dominance to reap massive profits while workers and consumers paid the price.

A group of four of the country’s biggest meat processors — including Tyson and JBS USA — collectively increased their profits 120 percent compared with before the pandemic; net income spiked 500 percent.

“Some claim that meat processors are forced to raise prices to the level they are now because of increasing input costs (e.g., things like the cost of labor or transportation), but their own earnings data and statements contradict that claim,” the briefing read, noting that their profit margins “have skyrocketed since the pandemic.”

Aaron Gregg contributed to this report.