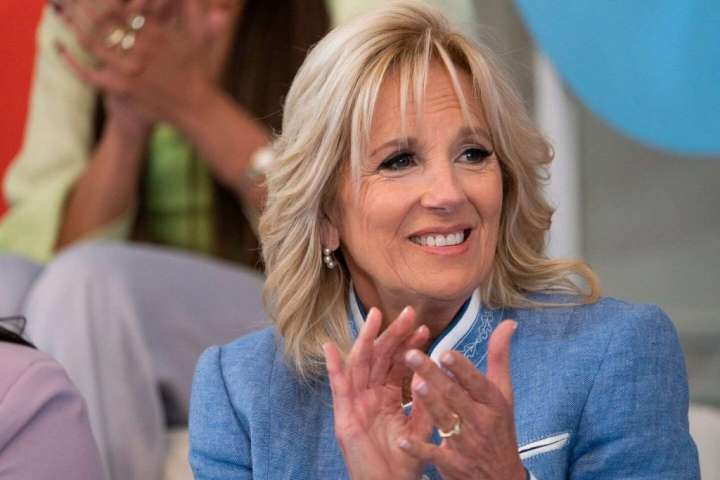 Jill Biden is embarking on a high-stakes, six-day diplomatic tour of three Latin American countries, as part of a flurry of activity that marks her most prominent time as first lady on a global stage.

On Wednesday, she boarded a plane that will take her from the staggering Andean heights of Quito, Ecuador, through coastal Panama City, and into bustling San José, the inland capital city of Costa Rica that’s technically in a tropical rainforest.

This is the first lady’s second solo foreign trip this month, following her historic trip into western Ukraine on Mother’s Day — as well as Romania and Slovakia, to meet with refugees from Russia’s war in Ukraine — and her third overall in the administration. (The first was to covid-racked Japan leading the United States’ tiny Olympics delegation.) And while visiting three of the United States’ hemispheric allies in Latin America is certainly less fraught than entering a war zone, experts say that this trip is the equivalent of walking a diplomatic tightrope.

Biden’s tour through capital cities of Central and northwestern South America is designed to be a prelude to the Summit of the Americas in June, the ninth such gathering of leaders in the region. The United States is hosting the summit in Los Angeles for the first time since the inaugural summit in Miami in 1994.

But the summit that the State Department website bills as “President Biden’s highest priority event for the region” is turning into “a disaster,” according to Ryan C. Berg, senior fellow at the Center for Strategic & International Studies. The U.S.’s plan to exclude leaders from Cuba, Nicaragua and Venezuela has led to threatened boycotts by left-leaning leaders throughout Latin America and the Caribbean, with Mexico’s Andrés Manuel López Obrador leading the charge. If he follows through, the absence of a president from one of the region’s largest countries could undermine the work the United States hopes to accomplish at the summit, Berg says.

“I think that there’s a sense of crisis that’s setting in now, in the administration, where they might host a summit where only 50 percent of the countries in the region show up,” Berg says, adding that the United States is correct in its plan to exclude the region’s dictators from a summit bolstering democracy.

The first lady is now stepping into this delicate soup of diplomacy. It’s just over a year since Vice President Harris’s first foreign trip, to Guatemala and Mexico, earned her criticism for her sharp words to prospective migrants: “Do not come.”

Biden, though, has brought a deft touch to relationship-building as first lady. On her early-May trip into Ukraine, she visited a school with first lady Olena Zelenska, who had been in hiding since the Russian invasion began in February. On Tuesday, she joined the president in Buffalo, to meet with survivors and families of victims of the racially motivated mass shooting at a Tops supermarket. Her trip to the Tokyo Olympics, while Japan was shut down to outsiders because of coronavirus concerns, combined a bilateral visits with Prime Minister Yoshihide Suga with images of Biden in empty stands, decked out in red, white, and blue, as a one-woman cheering squad for Team USA — whose members couldn’t even have their family members there.

On this trip, Biden has chosen to visit three pro-U.S. allies. It serves a dual purpose of praising countries that are working toward U.S. values while also trying to assure at least a minimal attendance at the summit, Berg says.

In a region that has been fraught with instability, corruption, and human rights violations, she probably will be highlighting the ways these countries have been striving toward democracy promotion, stopping migration, and countering the role of China and Russia, according to Vanda Felbab-Brown, a senior fellow at the Brookings Institution.

Visiting friendly countries may seem like an easy layup, but Anita McBride, director of the First Ladies Initiative at American University and Laura Bush’s former chief of staff, says Biden is taking on a delicate task of ensuring allies remain allies.

“You want those relationships to be strong, especially in a region fraught with different views, different personalities, different leadership views toward the United States,” McBride says. “You can’t ignore your friends when you’re trying to make friends with your enemies.”

Biden’s tour begins in Quito, Ecuador, the second-highest capital city in the world at 9,350 feet. On Thursday, Biden will meet with Ecuador’s president and first lady and tour a child development center. From there, she’ll head to Panama City, where a major focus of the visit will be highlighting the country’s efforts to combat HIV/AIDS. Her last stop in Costa Rica’s capital, San José, will make her the first high-level U.S. official to meet President Rodrigo Chaves, who won his election in April, amid allegations of sexual harassment from multiple women while he worked at the World Bank.

Ecuador, Panama, and Costa Rica have all been affected by immigration, with a large number of Venezuelans fleeing authoritarianism and economic downturn and winding up in Ecuador, or Venezuelans and Haitians crossing into Panama. Costa Rica, meanwhile, kept its borders open to asylum seekers in the pandemic and saw its population of refugees from its northern neighbor, Nicaragua, double over the course of eight months, with more than 150,000 seeking a new home there by February.

As part of her visit to Ecuador, she’ll visit with migrant teenagers from Venezuela and Colombia, as well as Ecuadoran teens, who are getting an accelerated education after dropping out of school.

Ahead of the Summit of the Americas, there is sense of neglect among Latin American countries, says Rebecca Bill Chavez, president and chief executive of the Inter-American Dialogue, a network of global leaders. “There is a growing perception in the region that the U.S. really doesn’t care about the region except for the Northern Triangle” — El Salvador, Honduras and Guatemala. In July 2021, the administration announced the Build Back Better World plan to bring $40 trillion of infrastructure to developing countries. “There was that commitment made a year ago, but there’s been no follow-through,” says Bill Chavez.

The summit is three weeks away, but invitations have not gone out to major leaders in the region. The website is sparse. “I saw an agenda about four weeks ago, and it was three-quarters of a page,” says Berg, who says he’d been given the document by a Democrat on Capitol Hill who was alarmed. If the agenda were more robust, says Berg, leaders would fear missing out on opportunities by not attending. But as it stands, he says, there would be little political cost to skipping the event.

The first lady’s Latin American trip also comes at a time when the administration’s attention is focused on Ukraine in Europe and when the President is preparing for his first trip to Asia, where he is expected to use his time in Japan and South Korea to get those U.S. allies to put pressure on China, which has refused to condemn the Russian invasion of Ukraine.

Biden will address “countries that just have not been receiving that high-level, high-power U.S. attention,” says Felbab-Brown. She adds that there is great value in the administration “spreading the wealth” and sending “a very personable interlocutor” like Biden into places like Costa Rica, traditionally emphasized as a U.S. partner; Ecuador, which doesn’t get much exposure; and Panama, which is an important ally in dealing with Venezuela.

In the absence of such attention from the United States, Felbab-Brown says, China has been able to make economic inroads, and Russia has inserted itself politically by supporting authoritarian regimes to disrupt regional stability and undermine the United States.

Biden also brings with her a global spotlight. “I think there’s really positive trends in these three nations. … When the first lady goes, it shows that, ‘Hey, we do notice these efforts and we do want to highlight them,’” says Sen. Tim Kaine (D-Va.), who chairs a subcommittee on the Western Hemisphere on the Senate Foreign Relations Committee.

“Look, she’s really good,” he says of Biden, with whom he did events when Joe Biden was vice president. “She has such an open, caring and winning attitude.” He also feels “heartened” by her visit and optimistic that this is the beginning of the administration taking a more active role in the region.

Over the course of the next six days, Biden will have to avoid some of the land mines that Harris stepped into during her trip to Latin America, which may explain why migration is a small part of the agenda. Harris is “a very engaging messenger,” Felbab-Brown says, “but the problem is she is tasked with bringing a message that is tough to follow.” People want to be able to migrate, and governments don’t want to be told to reform. “There are limits to how charm can produce a tremendous reception if you don’t like the message,” she says.

Whether Biden’s trip will reverberate with Latino voters the Democrats are struggling to hold onto in the midterm elections remains to be seen.

“What I think is sad,” says Gabriel R. Sanchez, a fellow in governance studies at the Brookings Institution, “is that the majority of Latino voters, unfortunately, are still not very clear where the Biden administration stands on immigration, which to me is all about messaging.”

Kaine says that even if Biden’s trip doesn’t move the needle much with Latino voters, it could still have an upside. Latino voters “know when we’re paying attention and when we aren’t, and I think they are often as frustrated by the lack of attention as folks who are in those countries,” Kaine says.

Biden’s visit, he says, “I think it will be viewed as a sign of respect.”