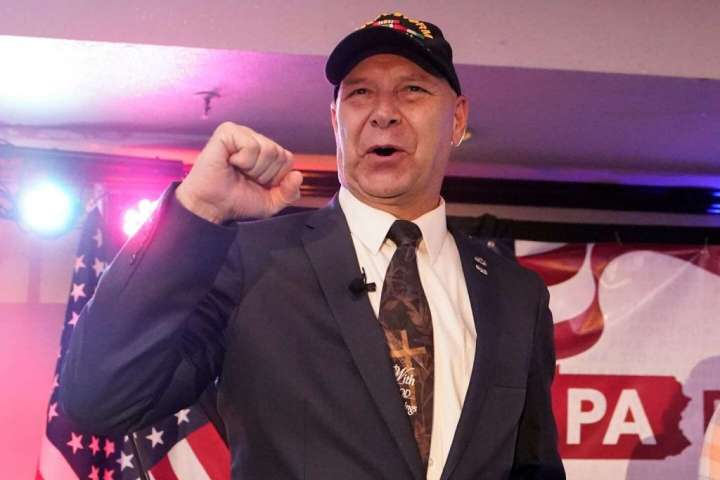 One of Pennsylvania’s most prominent election deniers just won the Republican nomination for governor. If elected in November, Doug Mastriano and the GOP would have an enormous amount of power to certify the winner of the next presidential election in this crucial swing state.

“I saw better elections in Afghanistan than in Pennsylvania,” Mastriano said during his campaign, referring to the 2020 election that he, echoing former president Donald Trump, baselessly claims was subject to fraud.

Mastriano’s nomination also gives Democrats hope they can hold onto the governor’s mansion in November, despite the wind being at Republicans’ backs nationally.

Here’s what to know about Mastriano.

The basics: He’s a first-term state senator who was relatively unknown — until Trump lost the 2020 presidential election, in large part by narrowly losing Pennsylvania to Joe Biden.

Mastriano, a retired Army colonel, had run for Congress in 2018 but failed to break through in a Republican primary.

On Tuesday, he beat eight other Republicans running for governor, including former congressman Lou Barletta, who is arguably better-known in the state after running for U.S. Senate four years ago.

Mastriano’s election-denier stance is a large part of his candidacy: Mastriano rose to prominence in the aftermath of the 2020 election by falsely claiming Trump won the state. Mastriano also helped commission an unauthorized audit of voting machines in a rural county, The Washington Post’s Colby Itkowtiz and Rosalind S. Helderman reported.

He also urged fellow state lawmakers to throw out the election results. Mastriano wanted Republicans, who control both chambers in the Pennsylvania state legislature, to name their own winner — a likely unconstitutional plan, given that Pennsylvania (and every other state) awards its electoral votes based on who wins the popular vote, not on who legislatures want to be president.

While celebrating his decisive primary win Tuesday night, Mastriano leaned into being characterized as extreme, saying: “They like to call people who stand on the Constitution far-right and extreme,” report The Post’s Annie Linskey and David Weigel.

He has been subpoenaed by the congressional Jan. 6 committee: The committee has requested that Mastriano hand over information related to his efforts to overturn the election results in Pennsylvania and his appearance at the Jan. 6 Stop the Steal rally. He organized buses for Pennsylvania Republicans to attend.

The degree of his participation in the insurrection on Jan. 6 is contested. Mastriano said he and his wife left the Capitol when they saw the march turning violent. But video footage shows Mastriano and his wife entering through barricades set up by the Capitol Police that attackers had breached. There is no evidence he entered the Capitol.

His other political views are extreme, too: Mastriano supports a total abortion ban. Other top Republican candidates also don’t support exceptions for rape or incest — positions out of line with the broader American public. But Mastriano goes further than even some antiabortion groups, by supporting a ban even when the life of the woman is at stake: “Every baby deserves a right to life,” he said at a debate.

He also focused his campaign heavily on opposing coronavirus restrictions.

How Mastriano could influence the 2024 presidential election if he becomes governor: Unlike in many other states, Pennsylvania governors appoint their own secretaries of state, who supervise elections. Mastriano has said he would appoint a secretary of state who would require all voters to re-register before they vote.

In addition, Mastriano would effectively become the leader of the Republican Party in Pennsylvania. The state’s Republican lawmakers have rebuffed his efforts to blatantly overturn election results before, but that could get much harder for them to do if he is governor.

The state of Pennsylvania will have 19 electoral college votes in the 2024 election, so if it is a tight race, the Keystone State truly could be central to the outcome.

Establishment Republicans didn’t want him to win: Trump endorsed Mastriano in the final days of the primary. But establishment Republicans, both in Pennsylvania and nationally, have been extremely anxious about Mastriano winning, because they think he’s too radical to win in a general election in a state that voted to send Biden to the White House. Pennsylvania also has a competitive Senate race that could determine which party controls that chamber of Congress — and thus motivate Democratic voters to show up at the polls.

The Democratic nominee for governor is the state’s attorney general, Josh Shapiro. He ran unopposed in the primary and is already highlighting Mastriano’s extreme political views, especially on accepting the results of a legitimate election.

Trump just endorsed one of the most extreme and dangerous GOP candidates in the country for Governor of PA.

He wants to ban abortion and undermine elections. He attended the 1/6 insurrection and crossed police barricades.

How he won the primary: Mastriano didn’t spend much on his campaign, and he avoided interviews with the independent media — including by blocking Post reporters from one of his recent campaign events. But he won grass-roots support.

He claimed on a radio show that Trump asked him to run — echoing what election-denying secretary of state candidates in other swing states have said. Mastriano also aligned himself with a far-right Republican running for U.S. Senate, Kathy Barnette. (That race is still outstanding, but Barnette is far behind the other candidates.)

Overall, Mastriano framed himself as the only candidate willing to fight against the election results in Pennsylvania. It’s a position we’re seeing resonates strongly with the party’s base — and not just in Pennsylvania.

What the battle for Pennsylvania governor looks like now: It slightly favors Democrats, almost entirely because Mastriano is the Republican nominee. The GOP’s “political nightmare became a reality,” says the nonpartisan elections analysis blog Cook Political Report. It ranked the Pennsylvania governor’s race as leaning Democratic.

Shapiro is a moderate Democrat who could appeal to Republicans turned off by Mastriano.

At the same time, he appeals to Democrats on key issues. On abortion, Shapiro said he supports allowing Pennsylvania’s law, allowing most abortions up to 24 weeks in a pregnancy, to stay on the books if the Supreme Court overturns Roe v. Wade. And on the 2020 election, Shapiro, as the state’s attorney general, defended Pennsylvania’s results in court against Trump allies.

But Democrats across the country are still facing major head winds as Americans are pessimistic about inflation and their future, so nothing is a given for Democrats, especially in such a competitive state as Pennsylvania.