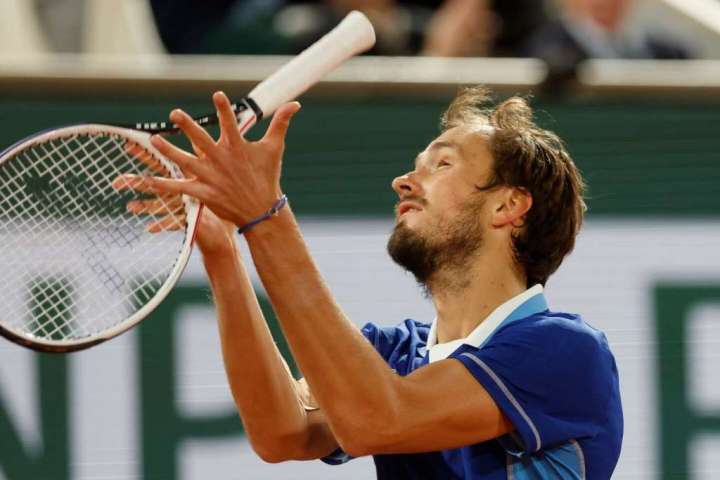 Hours after Holger Rune, an unseeded 19-year-old from Denmark, stunned fourth-seeded Stefanos Tsitsipas and advanced to the French Open quarterfinals Monday, Marin Cilic did the same to Daniil Medvedev at Roland Garros. On the women’s side, Jessica Pegula became the third American woman to reach the quarterfinals.

Cilic, the 20th seed, advanced to the quarters for the third time with a 6-2, 6-3, 6-2 victory over Medvedev, the No. 2 seed and a French Open quarterfinalist last year.

More surprising was the 7-5, 3-6, 6-3, 6-4 victory by Rune, ranked 40th in the world. The upset placed him in a quarterfinal against eighth-seeded Casper Ruud, the first man from Norway to advance to the round of eight in Paris.

The first player in the men’s top eight to lose, Tsitsipas never found a rhythm. “I was very nervous on the court, being frustrated a lot,” he said, “and I knew I was this way, but I couldn’t stop being like this.”

Rune was 0-2 in Grand Slam events until last week, and his quarterfinal presence marks a generational change. With Rune and sixth-seeded Carlos Alcaraz, this will be the first Grand Slam with two teenagers in the men’s quarterfinals since Hendrik Dreekmann and Andrei Medvedev at the 1994 French Open.

“These kids are going to want to beat me badly because obviously they are chasing,” Tsitsipas said. “I’m chasing, too, but I’m at a different kind of position than they are. I’m hungry to beat them, too. Now that they have beat me, I want payback.”

Pegula, the 28-year-old daughter of the owners of the Buffalo Bills and Sabres, advanced to a Grand Slam quarterfinal for the second straight time with a 4-6, 6-2, 6-3 win over Romanian qualifier Irina-Camelia Begu. Pegula next will play world No. 1 Iga Swiatek, who rallied past unseeded Chinese teenager Zheng Qinwen, 6-7 (7-5), 6-0, 6-2.

Pegula, seeded 11th, joins Americans Coco Gauff and Sloane Stephens in the quarters. Gauff and Stephens play each other Tuesday.

American Madison Keys, a Roland Garros semifinalist in 2018, was less fortunate Monday, losing, 1-6, 6-3, 6-1, to Russia’s Veronika Kudermetova, who advanced to the quarterfinals of a Grand Slam tournament for the first time.