4 takeaways from the fourth Jan. 6 hearing 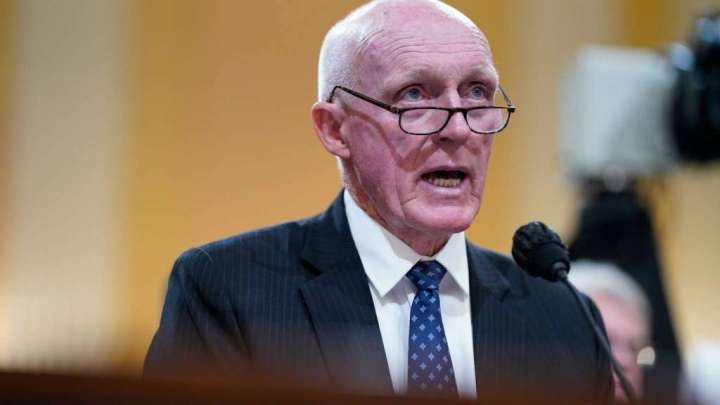 The House committee probing the Jan. 6, 2021, attack on the Capitol held its fourth hearing Tuesday afternoon, focusing on President Donald Trump’s pressure campaign on state and local officials to help overturn the 2020 election results, along with his team’s “fake electors” plot.

Arizona House Speaker Russell “Rusty” Bowers (R) provided some of the most compelling testimony at Tuesday’s hearing — and of any hearing thus far. In doing so, he added to the growing volume of evidence that Trump’s team was told its plot to overturn the election was illegal.

“He pressed that point, and I said, ‘Look, you are asking me to do something that is counter to my oath, when I swore to the Constitution to uphold it. And I also swore to the Constitution and the laws of the state of Arizona. And this is totally foreign as an idea or a theory to me. And I would never do anything of such magnitude without deep consultation with qualified attorneys,’” Bowers said. “And I said, ‘I’ve got some good attorneys, and I’m going to give you their names. But you’re asking me to do something against my oath and I will not break my oath.’”

Bowers also recalled Giuliani acknowledging at one point that he didn’t yet have the evidence to back up the action he was asking for.

“My recollection [is] he said, ‘We’ve got lots of theories; we just don’t have the evidence,’” Bowers said. “And I don’t know if that was a gaffe or maybe he didn’t think through what he said. But both myself and others in my group — the three in my group and my counsel — both remembered that specifically.”

Bowers said Trump lawyer John Eastman also inquired about decertifying the electors — supposedly so the courts could decide — at which point Bowers offered a similar response about the lack of evidence to back that up, even if he could do it.

“And I said, ‘You’re asking me to do something that’s never been done in history — the history of the United States. And I’m not going to put my state through that without sufficient proof? And that’s going to be good enough with me? … No, sir.”

The committee previously introduced testimony and evidence that Eastman both acknowledged and was told the Jan. 6 plot broke the law. A White House lawyer also said Giuliani conceded to him that the plot was unlikely to stand up in court.

Bowers added that when he found out the Trump campaign had designated fake electors in Arizona on Dec. 14, his reaction was that “this is a tragic parody.”

He also said that, as late as the morning of Jan. 6, Rep. Andy Biggs (R-Ariz.) called and asked him to sign a letter supporting decertification of Arizona’s electors.

At one point in Tuesday’s hearing, the committee shared evidence that Trump was pretty directly involved in the fake-elector plan.

Republican National Committee Chairwoman Ronna McDaniel said Trump, on a conference call, introduced Eastman to talk about having the fake electors in place as a contingency.

“Essentially, he turned the call over to Mr. Eastman, who then proceeded to talk about the importance of the RNC helping the campaign gather these contingent electors in case any of the legal challenges that were ongoing changed the result of any of the states,” McDaniel testified.

McDaniel didn’t say Trump himself was involved in designating the potentially illegal electors. And at this point, the effort was cast as having the electors in place as a contingency in case states overturned their results — rather than as part of the effort to overturn the electoral votes on Jan. 6, regardless of whether the electors were validated.

But it suggests Trump was clued in on this part of the effort early on. And since those fake electors might have been illegal even at that early juncture — and were ultimately used as part of the Jan. 6 plot — that matters.

The committee also revealed that, on Jan. 6, a staff member for Sen. Ron Johnson (R-Wis.), suggested Johnson give Vice President Mike Pence lists of Michigan and Wisconsin’s fake electors. A Pence aide instructed another aide not to deliver the list. Johnson’s office responded to the committee evidence by saying Johnson himself “had no involvement in the creation of an alternate slate of electors and had no foreknowledge that it was going to be delivered to our office.”

To start the hearing Tuesday, the committee laid out new evidence showing just how much pressure — and even, in some cases, apparent harassment — the Trump team’s allies subjected state officials to.

The committee repeatedly featured video of Georgia state election official Gabriel Sterling’s news conference from Dec. 1, 2020. Sterling, who also testified Tuesday, pleaded for Trump and his allies to “stop inspiring people to commit potential acts of violence” or “someone’s going to get killed” — a warning that proved prescient come Jan. 6.

But that wasn’t all.

This all drove home that it wasn’t just Jan. 6, and it wasn’t just Sterling. Officials, including some Republicans, were under intense pressure at the time — the kind of pressure that could be compelling to those who weren’t dug in or didn’t have to abide by certain laws by virtue of their positions.

4. Another member of the GOP testifies about Trump’s false statements

On top of the evidence that Trump and his team were told that their voter-fraud claims were false and made them anyway, we now have evidence that they have not told the truth about what their own GOP allies were saying.

Last week, Greg Jacob, then general counsel to Pence, testified that the Trump campaign’s Jan. 5, 2021, statement saying that Pence was “in total agreement that the vice president has the power to act” on Jan. 6 was “categorically untrue.” In a taped deposition, Trump campaign aide Jason Miller testified that Trump “dictated most of” that statement.

On Tuesday, Bowers called out another example. Shortly before Bowers’s testimony, Trump put out a statement attacking him. Trump claimed that Bowers told him in November 2020 that the Arizona vote was “rigged” and that he won the state. Bowers said it never happened. “I did have a conversation with the president; that certainly isn’t it,” he said, calling the allegation “false.”