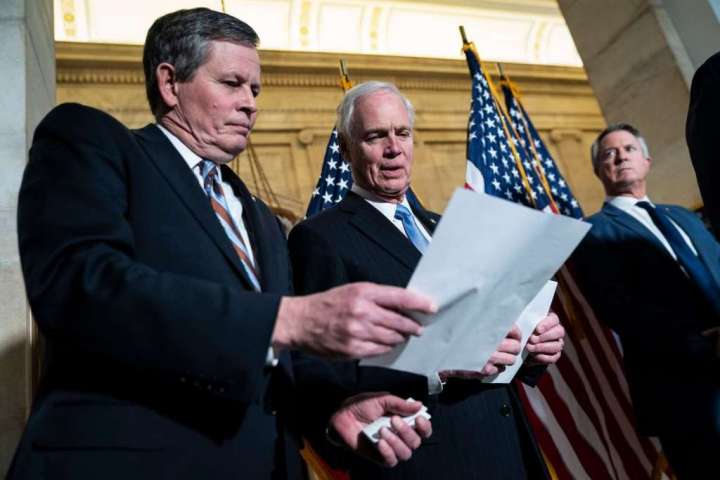 The aftermath of Jan. 6, 2021, has led to some squirming when it comes to Republicans accounting for their roles in the attempt to overturn the 2020 election. Perhaps the chief example is Rep. Jim Jordan (R-Ohio) awkwardly and haltingly responding to questions about his contact with President Donald Trump that day.

But Sen. Ron Johnson’s (R-Wis.) response to a new revelation from the House committee investigating the insurrection is up there on the list. And that response reinforces both how casual and haphazard the effort to thwart democracy was, and how much Republicans are now at pains to account for it — despite their attacks on the Jan. 6 committee and its mandate.

To recap: On Tuesday, the committee released text messages showing that Johnson’s top aide, Sean Riley, inquired with Vice President Mike Pence’s staff on Jan. 6 about having Johnson give Pence slates of Trump electors — in actuality, fake electors — for Michigan and Wisconsin. The Pence aide, Chris Hodgson, responded curtly, “Do not give that to him.”

RILEY: Johnson needs to hand something to VPOTUS please advise

HODGSON: What is it?

RILEY: Alternate slates of electors for MI and WI because archivist didn’t receive them

HODGSON: Do not give that to him.

The exchange raises a host of questions, most notably: Why was Johnson’s staff trying to deliver this information? And: Could this implicate Johnson’s office or others in criminal activity, given that the slates themselves might be illegal?

The dodginess of all of it was reinforced by a swift response from Johnson’s office, which assured that the senator himself had nothing to do with this. And Johnson himself later said that he did not support the effort to get the fake electors to Pence.

From his exchange with CNN’s Manu Raju and other reporters:

Q: Did you support his efforts to try to get the slates to the Vice President?

JOHNSON: No. I had no knowledge of this. I had no involvement in an alternate slate of electors. I had no idea this was even going to be delivered to us. It got delivered staff to staff. My chief of staff did the right thing – contacted the vice president’s staff. They said [they] didn’t want it, so we didn’t deliver it. That’s the end of story.

New – Ron Johnson told us he has “no idea” who tried to get him to share fake electors from MI and WI to Pence on Jan. 6. Says he was aware of ask on Jan. 6 AM.

“I was aware that we got this package and that somebody wanted us to deliver it so we reached out” to Pence’s office. pic.twitter.com/bjJswKb28n

Johnson said the he was broadly aware of the effort to deliver something to Pence but that he wasn’t aware of the details:

Q: So did you not know what was being talked about in terms of what this document was?

JOHNSON: I was aware that we got this package and that somebody wanted us to [give it to] the vice president. We reached out. They didn’t want it. We didn’t deliver it.

Q: So you were aware of it on Jan. 6 – that morning – when your chief of staff texted the vice president’s office?

JOHNSON: I was aware that we got something they wanted to be delivered to the vice president. I mean, you guys, this took place in the span of a few minutes. The story ended. There’s nothing to this.

Raju then made the pertinent point: This wasn’t “nothing.” This was congressional staff assisting in an effort to have Pence overturn a presidential election.

Johnson reiterated: “Again, I had no involvement in that whatsoever.”

Essentially, Johnson said his office was just a go-between. He said the slates came from a House office and were transmitted “staff to staff.” But he offered no detail on which House office or staffer was involved — except to say that it was an “intern.” And he said he wasn’t even interested in finding out further information.

To accept Johnson’s version of events, it would mean that his office was happy to serve as a conduit between a House intern and Pence’s staff, offering to deliver documents from the intern to no less than the vice president’s office without really reviewing the contents or their implications. In addition, his top aide said in the texts shared by the Jan. 6 committee that Johnson himself would deliver the documents — but we are still meant to believe that Johnson wasn’t clued in on this at all.

And despite Johnson’s suggestion that Riley was casually asking about whether Pence’s office wanted the information, Riley in fact stated, “Johnson needs to hand something to VPOTUS please advise.”

That’s a pretty remarkable way of doing business, if you take Johnson’s explanation at face value.

Riley has not responded to questions about the situation.

The timing here is key. The time stamps on the text messages indicate this conversation took place at 12:37 p.m. on Jan. 6, just as Congress was set to certify Joe Biden’s electoral win.

The fake electors were a necessary part of the plot to have Pence help overturn the election; the idea was that Pence would deem the Biden electors and Trump electors to be in conflict, and either reject the Biden electors or give the states more time to review the situation.

Of course, the Trump electors weren’t legitimate — both because they weren’t duly elected as they claimed and because they didn’t comply with the law in some states. And Pence had already declared he wouldn’t go along with the plot. But the fact that people were still trying to transmit this information to him at this late hour suggests they hadn’t given up — that this effort by congressional Republicans or at least their staffs persisted until the last minute, shortly before the insurrection at the U.S. Capitol.

Pence’s office saying they didn’t even want this information also reinforces how much they viewed the matter as touchy, at least, and problematic, at worst. What would be the harm in simply accepting some information from a senator, after all?

There’s another aspect of this that doesn’t make sense: Riley’s claim that the National Archives hadn’t received the slates. As Politico’s Kyle Cheney noted, that’s false. Documents released by the Jan. 6 committee show that the archivist had indeed received the slates from Michigan and Wisconsin. Cheney raised the possibility that perhaps they had been received by the Archives but hadn’t been shared with Pence, because they weren’t legally valid.

Which seems a pretty plausible theory. Another text shared by the committee indicated an effort was afoot as late as Jan. 4 to fly in the fake electors document.

For the Archives to not even treat the slates as worthy of transmission would certainly reinforce just how problematic and potentially illegal all of the fake electors effort was. From there, it’s worth knowing how much everyone involved knew about the Archives’ actions. Perhaps they knew only that the slates hadn’t been given to Pence and assumed the archivist somehow hadn’t received them?

But the point remains that there was this last-minute effort to get Pence legally invalid slates of electors, in the hope that he would change course. Pence’s office wanted no part of the information, and apparently Johnson wants no part of being associated with the effort — or in finding out, or sharing, more details about it.

Which kind of reinforces the utility of the Jan. 6 committee itself.