10 things you need to know about riding Amtrak overnight 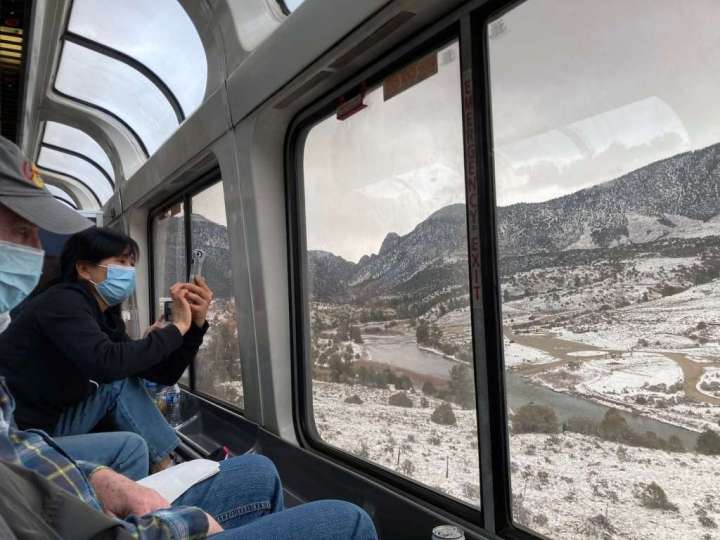 This spring, I took an Amtrak sleeper train from Sacramento to Denver and back. I loved watching the spectacular scenery unfold as we passed herds of elk by the shores of the lengthy, stalwart Colorado River, the astonishing rock formations throughout Utah, the surprise snows in the Rockies and, at the other end of the trip, the Sierra.

It gave us fantastic insight into our country’s natural beauty — and my only responsibility was to watch. I didn’t have to worry about going the right direction, where to stop for food, staying alert or even staying awake. Rail travel is a gift, and given the upheaval in the airline industry and the alarming price of gas, it makes more sense than ever.

That said, the prospect of spending the night in a sleeping car understandably raises a number of questions. Here’s what I learned when my family traveled out West.

Q: What is the difference between roomettes and bedrooms?

A: This is hard to answer, because the definitions vary between western trains (double-decker Superliners) and eastern trains (Viewliners), and even depend in some cases on when the train was manufactured. Amtrak spokesman Marc Magliari says that a “bedroom, no matter where you are in the country, includes a shower and a toilet.” There is one exception: The accessible bedroom does not include a shower; the space is instead reserved for wheelchair or mobility devices. If no one reserves the accessible bedroom, it is open for anyone, disabled or not, a week or two before departure day. Magliari says that, on some lines, roomettes have an in-room sink and toilet.

On the Zephyr, we rode a roomette one direction and the H bedroom the other. In our roomette, two comfortably sized chairs faced each other between a sliding-glass door on one side and a large window on the other. At night, the chairs pulled out from the wall to make one bunk, and a second bunk above came down from the wall.

Aboard Amtrak’s Crescent, surprising comfort and welcome seclusion on a slow train to Mississippi

Q: What is the best room to book?

A: On the Superliners, Bedroom A is the smallest, so try any other room. Larger groups on the Superliner might book a family bedroom, which has two adult beds and two kid-size beds, but no toilet, sink or shower. Upstairs roomettes on the Zephyr seemed preferable for ease of access to the dining and observation cars, and they seemed airier at that elevation, but I also appreciated the privacy of being on the lower level. Narrow staircases connect the levels, with no elevator for disabled access.

Q: How do the bathrooms work?

A: Bathrooms, too, differ in size and placement. In our Zephyr bedroom, only a cloth curtain separated the seats from the toilet, but it was nice to have a sink. There was a bank of bathrooms and a shower room in the hallway, which coach passengers did not have access to. Those bathrooms were quite small, roughly the size of airplane restrooms, and in the family bathroom, there was a changing table that folded down over the toilet. The Americans With Disabilities Act-compliant shower room contained a seat and small shelf for items in the antechamber, and a small shelf and seat within the shower, which had a handheld shower affixed to the wall.

Q: Can you lock the roomettes and bedrooms?

A: Yes, but only when you’re in them. If you wander the cars or go to dine, you’ll need to bring your valuables with you or store them in locked luggage. There are luggage racks in the hallways of the sleeper-car areas where you enter and exit the train at the stations. You are instructed to pull the curtain of your sleeping quarters and Velcro it closed when you depart to prevent people from seeing what’s in your space, because the movement of the train often makes the unlocked doors slide open.

Q: Do you have to buy a sleeping-car ticket to travel overnight?

A: No. You can choose to ride coach, even on multi-night trips. Your seat reclines but does not lie flat. You are also not permitted access to the dining car, so you will have to bring food or choose from the limited snack bar options.

Q: Is this better for introverts or extroverts?

A: It’s great for both. If you’re in coach, you may have a talkative seatmate or someone immersed in their phone or a book, just as on an airplane. To guarantee privacy, reserve space in the sleeping-car quarters; you can even request meals to be taken there. Observation cars, if your train has one, and cafe cars on the eastern trains seem designed to encourage interaction between passengers, with seating in pods rather than rows. In the dining car, staff used to seat singles together to fill up a four-top, but the pandemic has ended that policy unless you make the arrangements yourself. I did share a talkative meal with a stranger by asking, and had people join me at an observation-car table.

Still on track at 50: Amtrak celebrates a half-century of operation

A: The dining car is now only for sleeper-car passengers (or on some lines, business-class passengers), for whom a full breakfast, lunch and three-course dinner are included with the booking. Meals are quick affairs, with tables turning over to get everyone seated and fed in waves. (You’ll get a timed reservation slot for dinner.) If you’re saving money by going coach, you’ll need to bring your own food or subsist on the minimal offerings at the snack bar, with items such as tacos and pizza. Magliari says the snack bar’s most popular item is the hot dog, although Amtrak is working to make more fresh items available. He notes that efforts to sell apples and bananas on Midwest corridor trains didn’t fare well.

Q: Can you work on the train?

A: The WiFi depends on your train’s route and tends to be cellular-based, which follows the highways, Magliari says. So if you’re heading to remote areas or going through tunnels, you’re going to have blackout moments without connectivity. For more commuter-oriented routes, WiFi should continue uninterrupted. Coach seats have a tray table that pulls down from the seat in front of you to provide a laptop workspace, and in the Zephyr’s roomettes and bedrooms, a small table folds out of the wall.

Q: Is the train noisy?

A: On double-decker trains, upstairs spaces (coach seats and some of the sleeper rooms) are quieter, because they are farther from the rails. In terms of noise from other passengers, Amtrak’s conductor declares quiet hours from around 10 p.m. to 7 a.m., and lights are dimmed overnight. (The party can continue in the observation or cafe cars, where lights remain on, but no food or beverages are sold.) I found that the rhythmic side-to-side movement of the train, paired with the engine’s noise, made for some of the best sleeping around, including a midday nap.

Q: Do trains run on time?

A: It depends on which “host railroad” owns the tracks. For us on the Zephyr, Union Pacific lines, which Amtrak’s report card in 2021 gave a C-plus, were significantly delayed by two to three hours in each direction. In 2021, only 37 percent of Zephyr lines ran on time. If you’re lucky, your train runs on lines owned by the more timely Canadian Pacific or Canadian National, such as the City of New Orleans train, which was on time 83 percent in 2021 — the only one of Amtrak’s long-distance trains to meet the Federal Railroad Administration standard. Short-term, state-supported trains were far more timely, such as the Hiawatha line, which runs on CP tracks and was on time 95 percent last year. All this to say, if you must reach your destination in time, depart a day early.