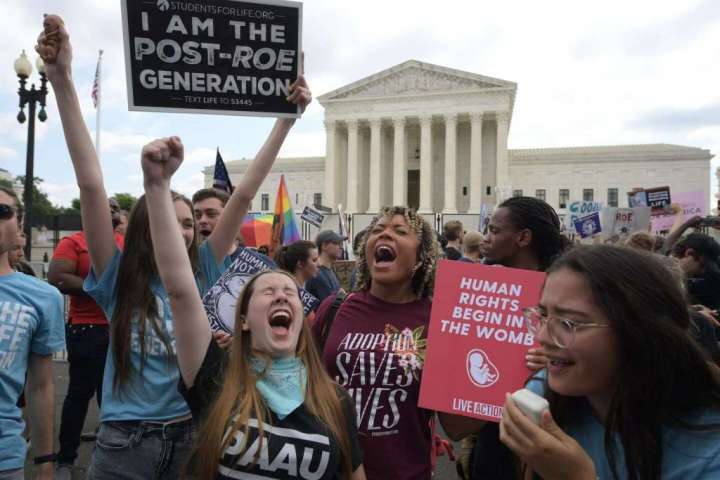 The Supreme Court has ended the only federal protections for abortion in America.

It’s a monumental decision that reverses 50 years of abortion rights in America, and one of the most famous Supreme Court decisions in modern history, Roe v. Wade. And it means that abortion could soon be illegal in as many as half of the states. (Thirteen states have trigger laws banning or curtailing abortion almost immediately.)

Here’s what the final Dobbs v Jackson opinion says, and how it differs from the draft opinion that leaked in May.

We knew this decision was probably coming because of a draft opinion published by Politico last month, leaked in a breach of Supreme Court policy.

But the public response doesn’t appear to have swayed the six conservative justices’ minds — and certainly not that of the opinion’s author, Justice Samuel A. Alito Jr. “He basically changed nothing,” said Emily Berman, a constitutional law professor at the University of Houston Law Center.

For example, the final opinion keeps the draft’s provocative comparison between abortion rights and racial segregation.

“Like the infamous decision in Plessy v. Ferguson, Roe was also egregiously wrong and on a collision course with the Constitution from the day it was decided,” Alito writes. (Plessy v. Ferguson was an 1896 case that affirmed the legality of racial segregation, and which the court later overruled.)

Alito’s central argument is that “the Constitution makes no express reference to a right to obtain an abortion,” and that legal abortion lacks “deep roots” in American history. And so back in 1972, he argues, the court overstepped its authority and took on a job more appropriate for elected lawmakers.

2. It claims indifference to how the decision will play out politically

Abortion is difficult to poll, but polling does at least consistently show that a majority of Americans want to keep Roe v. Wade in place. Alito appears very aware of that, and in his opinion he repeatedly professes not to care.

“We do not pretend to know how our political system or society will respond to today’s decision overruling Roe and Casey. And even if we could foresee what will happen, we would have no authority to let that knowledge influence our decision. We can only do our job, which is to interpret the law, apply long-standing principles of stare decisis, and decide this case accordingly,” he writes.

3. A debate about the legal principle of stare decisis

Stare decisis is Latin for entrenched legal precedent. What’s revolutionary about this opinion from a legal standpoint is how it overturns a precedent that many in the legal community (even, arguably, some of the Trump-appointed justices) said was settled law.

The liberal dissent argues that women have come to rely on this legal protection for abortion. And they argue it’s dangerous for the court to take such a bold step overturning that.

Justices Stephen G. Breyer, Sonia Sotomayor and Elena Kagan obliquely accuse the conservative justices of forsaking legal principle for political ends, saying “weakening stare decisis in a hotly contested case like this one calls into question the Court’s commitment to legal principle. It makes the Court appear not restrained but aggressive, not modest but grasping. In all those ways, today’s decision takes aim, we fear, at the rule of law.”

As The Post’s Aaron Blake has pointed out, even “[r]enowned conservative Judge J. Michael Luttig referred in a 2000 appeals-court ruling to Roe as having attained ‘super-stare decisis.’ ” (That’s the same Luttig who testified in the Jan. 6 hearings that former president Donald Trump’s plot to overturn his election loss posed a constitutional crisis.)

In his opinion, Alito acknowledges the importance of stare decisis but adds: “some of the Court’s most constitutional decisions have overruled prior precedents.” (That’s where he throws in the comparison between Roe and segregation, to show that it’s sometimes a good thing for the court to go against past rulings.)

The final opinion is significantly longer than the draft, in part because Alito responds to arguments from his liberal colleagues on the court. The liberal justices spend a lot of time in their dissent about the decision’s consequences for women and their reproductive health and general freedoms. “It says that from the very moment of fertilization, a woman has no rights to speak of,” they write. (The dissent mentions “woman” or “women” six times just in its first paragraph.)

He points out that they do not dispute his account of the history of abortion law in the United States, writing, “The dissent’s failure to engage with this long tradition is devastating.” And he points out that “the dissent does not identify any pre-Roe authority that supports such a right — no state or constitutional provision or statute, no federal or state judicial precedent, not even a scholarly treatise.”

Alito rounds out this new section by criticizing the liberal justices for writing at length about “the effects of pregnancy on women, the burdens of motherhood, and the difficulties faced by poor women” (which he calls “important concerns”) while leaving out “any serious discussion of the legitimacy of the States’ interest in protecting fetal life.”

In essence, Alito says, the two sides are talking past each other.

5. A debate over whether other rights are at stake

In the draft opinion and the final opinion, Alito explicitly says that his reasoning shouldn’t be understood to apply to other modern rights, such as same-sex marriage, access to contraception or interracial marriage. (He argued that abortion is unique because it deals with “potential life.”) Justice Brett M. Kavanaugh wrote a concurring opinion emphasizing that as well.

But Berman said she’s skeptical of that reassurance. This particular group of conservative justices already are willing to overturn a major Supreme Court decision, and they laid out clear logic for overturning others in this realm. “I don’t know if we can take them at their word,” she said.

Supreme Court Justice Clarence Thomas suggested, in a concurring opinion, that he and his colleagues “should reconsider” certain past rulings.

And the liberal justices warned in their dissent: “No one should be confident that this majority is done with its work.”

Chief Justice John G. Roberts Jr. didn’t sign on to overturning Roe v. Wade, though he agreed with the majority of his colleagues that the case at hand, a 15-week abortion ban in Mississippi, should be upheld.

Roberts wrote a separate opinion arguing for “a more measured approach.” He was in favor of allowing abortion restrictions earlier in a pregnancy than had been allowed by Roe and a later case, Planned Parenthood v. Casey — but said that overturning Roe outright was too much, too quickly.

Today’s “dramatic and consequential ruling is unnecessary to decide the case before us,” he wrote.