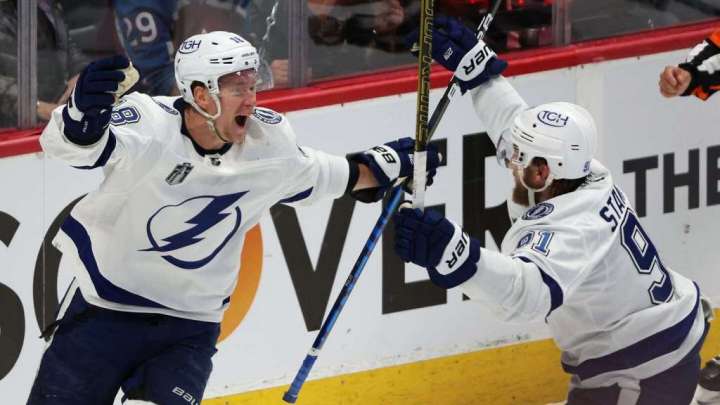 DENVER — The Stanley Cup was in the building Friday night at Ball Arena, sitting, waiting for the chance to be handed to the Colorado Avalanche. The hosts were a win from hockey’s biggest prize. And after a taut Game 5, the Avalanche will be the visitor Sunday in Tampa, still a win away.

The two-time defending champion Tampa Bay Lightning staved off elimination with a thrilling 3-2 win, holding on after forward Ondrej Palat scored to break a deadlock with 6:22 remaining, just the latest huge strike for Palat in these playoffs. Colorado still leads the best-of-seven series 3-2.

It was a back-and-forth final frame, with the Lightning clinging to a 2-1 lead after two periods. Colorado defenseman Cale Makar knotted the game just 2:31 into the third with a rebound that bounced off a Tampa Bay skate in front and slipped past Lightning goalie Andrei Vasilevskiy. It stayed locked at 2 until Palat struck for his 11th goal of the playoffs, coming free in the slot and beating Darcy Kuemper with a blast that the Avalanche goalie slowed but couldn’t stop from going through his legs.

The Avalanche pushed for the late equalizer, a capacity crowd urging it on, but Vasilevskiy had all the answers down the stretch. Colorado star Nathan MacKinnon, who has only one goal in the finals, had six shots on goal but couldn’t light the lamp.

“Listen, this is a huge challenge for us. … You’ve got to be excited for this challenge and embrace it,” Tampa Bay winger Pat Maroon said. “… We played good. Now we’ve got to play better.”

Vasilevskiy made 35 saves on a night when the Lightning needed him most. He was a wall during Colorado’s two power-play chances of the night, turning away multiple high-danger opportunities.

Tampa Bay never trailed, with Jan Rutta opening the scoring with 4:37 left in the first, beating Kuemper with a slap shot from the right circle.

The Avalanche answered with a strike from forward Valeri Nichushkin that tied the game at 5:07 of the second. Vasilevskiy lost the rebound, and Nichushkin pounced on it. It was Nichushkin’s ninth goal of the postseason; he registered a pair of goals in Colorado’s Game 2 win.

Tampa Bay winger Nikita Kucherov restored the Lightning lead at 8:10 of the second period on a four-on-three power play. It was the Lightning’s second power-play goal in the series and Kucherov’s first goal of the finals.

The Lightning bent but didn’t break after Makar’s early third-period goal and withstood a strong Colorado push before Palat’s heroics.

“He likes the big-time moments, and he plays extremely well under pressure,” Kucherov said of Palat. “You see it in past playoffs and these playoffs. So very happy to have him as a teammate.”

And while the Lightning stared down a 3-1 hole entering Game 5, it was confident about its chances headed into the elimination game. Two championships are great, Tampa Bay Coach Jon Cooper said Friday morning, but his group wasn’t ready to settle for just that.

“It comes down to finding just ways to win a series. It’s never a thought of sitting here saying, ‘We’ve got two; that’s enough for us,’ ” Cooper said. “If we had our choice, we would just write our name all the way around the circle, and that’s what we’re trying to do.”

The first period was a battle of special teams before Rutta’s goal. The Lightning was stifled twice on the power play in the opening 10 minutes.

Colorado had some of its best chances of the opening period on its own power play chance at 11:17 of the first but couldn’t find daylight past Vasilevskiy. MacKinnon had a wide-open breakaway with less than a minute left in the first, but his shot went wide of the left post.

Colorado will now try to rebound after the emotional letdown of falling short on its home ice. Teams that have held a 3-1 lead in a best-of-seven hold an all-time series record of 298-31 and a 35-1 mark in the Stanley Cup finals.

“It’s hard to carry momentum game to game when there’s a day in between,” said Makar, who had a game-high 28:09 of ice time. “If you’re thinking that they’re coming off momentum [from] tonight, I don’t know. We’ll see. But hopefully we can just have a quick start in Game 6, and that’s where we’re starting.”

Notes: Tampa Bay center Brayden Point did not play for the third straight game. Point suffered a lower-body injury in Game 7 of the first round and didn’t play again until Games 1 and 2 of the finals. …

Colorado forward Andre Burakovsky missed his third straight game with an upper-body injury, and his status for Game 6 is unclear. He was a game-time decision for Game 5.