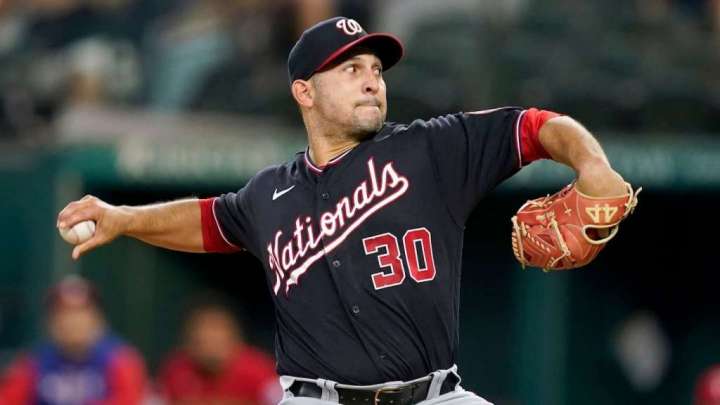 ARLINGTON, Tex. — Here was an odd sight in 2022, a quiet pitchers’ duel of starters throwing no harder than 90.7 mph. And that was the absolute limit for Paolo Espino and Dane Dunning at Globe Life Field on Friday night. For the most part, they sat in the high-80s, spun their breaking balls in the 70s, survived some hard contact and kept their opponents cold.

Espino, once a member of the Texas Rangers, threw five scoreless innings before Adolis García rocked a solo shot in the sixth. Dunning, once a member of the Nationals — a former first-round pick who went to the Chicago White Sox in the trade for Adam Eaton — tossed five scoreless before Luis García touched him for an RBI double, just ahead of Adolis García’s homer in the bottom half.

Sixteen outs shaved Espino’s ERA to 2.21 in 40⅔ innings. In his third start of the season, and his longest outing since last September, the 35-year-old kept proving to be a model pitcher for a rebuilding team. The Nationals then won, 2-1, after Josh Bell’s third hit scored Juan Soto in the eighth.

“I’m not looking at ERA. I mean, it’s too early,” said Espino, flashing big smiles once the clubhouse music was lowered down from booming. “Hopefully I end up with a 2.00 at the end of the season, maybe even a 1.00.”

Who else followed Espino out of the bullpen? After Espino yielded six hits and a walk and struck out three — mixing in a 69 mph curve for good measure — Manager Dave Martinez turned to Carl Edwards Jr., Kyle Finnegan and closer Tanner Rainey. Edwards bridged the gap between Espino and the high-leverage arms, logging five outs on 25 pitches. He had a tie to hold because Bell doubled before García’s RBI double in the sixth. Finnegan and Rainey had a lead to protect because Soto doubled before Bell’s go-ahead single.

Finnegan did his part by stranding a runner on second with a looking strikeout of catcher Jonah Heim. The critical sequence was getting Heim to swing way ahead of a low splitter, then painting the inside corner with 97 mph heat for strike three. Then Rainey’s end was much more dramatic, as he had runners on first and third with one out, got Marcus Semien to fly out to third and retired Corey Seager on a flyball to center. Leaving men on the corners lengthened Rainey’s list of rocky saves.

How did Bell feel about raking in his hometown? “It was cool just knowing I had friends and family here — friends that played baseball with me growing up,” Bell, a native of nearby Irving, said of collecting a single, double and triple against the Rangers (33-36). “Being able to do this in front of them makes it all that [much] more special.”

The short history of how Erick Fedde found his best pitch

What slowed the Nationals’ offense early on? Dunning, poor situational hitting and another questionable send from third base coach Gary DiSarcina. Washington (25-48) had one hit in the first, second and third, then two in the fourth. And in the fourth, Nelson Cruz doubled and, two batters later, Keibert Ruiz floated a single to right-center. Adolis García, the Rangers’ center fielder, ranged into the gap. He has a strong arm. But DiSarcina waved around Cruz, a slow runner who got a late jump, as García was fielding the ball. García’s throw beat Cruz by three or four steps, setting up an easy tag for Heim.

DiSarcina has had a spotty first year for the Nationals, who hired him to replace an aggressive Bobby Henley. In May, he admitted to a most human tendency of trying to push for runs when the Nationals aren’t scoring many. But doing so with Cruz, a 41-year-old designated hitter, felt ill-advised on multiple fronts.

“It was a good send,” Martinez said, twice defending DiSarcina during his postgame news conference. “The guy ran 30 feet [to get the ball in right-center]. The guy has a hose, we knew that coming, but when the game is like that we have to take chances.”

What are the next steps for Stephen Strasburg? To be determined still. Strasburg, 33, recently visited specialist Neal ElAttrache in Los Angeles. The pitcher is officially on the 15-day injured list with a stress reaction in his second and third ribs on the right side of his body. More plainly, though, he continues to have issues from undergoing surgery for thoracic outlet syndrome last summer. He made three rehab starts this spring, returned June 9 and then felt discomfort during a between-starts bullpen session. Recent history indicates his next ramp-up could take a while.

“We have not come up with a plan of action yet,” General Manager Mike Rizzo said before the win. “We’re still gathering all the information.”

Is there generally little urgency at the moment?

“He can’t do anything until he’s pain-free and feeling good,” Rizzo answered. “He’s not there yet, so there’s no rush to put a plan together when he’s on rest now anyway.”