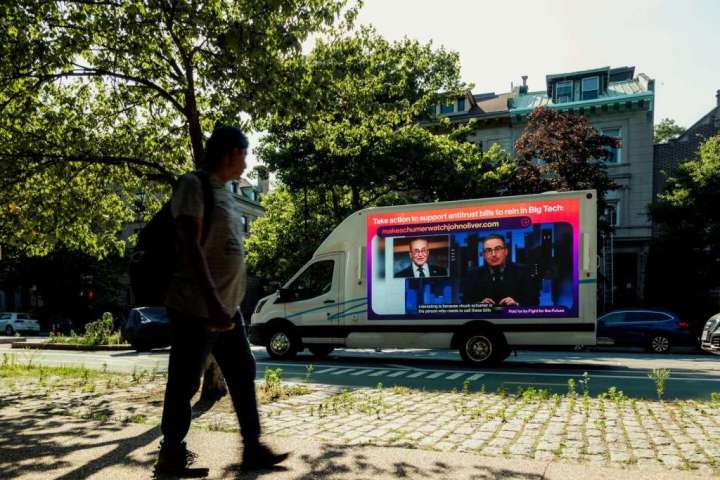 The left-leaning advocacy group Fight for the Future watched as tech companies blanketed the airwaves with ads urging millions to tell their senators to block major antitrust bills winding their way through Congress. Trying to make the most of its significantly smaller budget for counter messaging, the advocacy group decided to target one person: Senate Majority Leader Charles E. Schumer.

Over the weekend, the group drove billboard trucks with 12-foot-wide screens to Schumer’s homes in New York and Washington, blaring a video of comedian John Oliver urging Congress to pass the legislation.

The decision to target Schumer was a simple one, said Evan Greer, Fight for the Future’s director: “He is the key. … This was a way to get creative and put this right in his face.”

Friends and foes alike of the landmark legislation, two bills that seek to rein in the business practices of the country’s largest tech companies, have their eyes on Schumer, who will decide whether the legislation will make it to the Senate floor for a vote.

In recent days, it’s not just proponents of the bills who have sought to sway Schumer. The leaders of Google and Amazon have personally called the Senate majority leader. His office said he tells anyone who calls him to discuss the legislation the same message: “Senator Schumer supports the legislation and is working with Senator [Amy] Klobuchar and others to get the necessary votes to pass it,” said Schumer spokesman Justin Goodman.

It’s a wonky yet momentous political battle that has united an unlikely alliance of would-be trustbusters from left and right against some of the wealthiest corporations in world history. With time running out for this Congress to pass them, those corporations are putting up the political fight of their lives.

Three years in the making, the legislation would prohibit the largest online platforms from tilting the playing field toward their own goods and services, its proponents say. But the tech companies say it would do far more than that, squelching innovation and giving a leg up to their rivals in China. They aren’t shy about claiming a national security threat.

The titans of the industry have mobilized like never before to combat it. Google CEO Sundar Pichai personally called Schumer during a visit to Washington last week. Amazon CEO Andy Jassy has been making personal calls to Schumer and other lawmakers, Politico first reported earlier this month. And Apple CEO Tim Cook made his own trip to Capitol Hill earlier this month.

Meanwhile, industry-backed groups have been pouring tens of millions of dollars into an anti-regulation campaign, blasting ads on TVs and social media feeds across the country that warn Americans the tech bills will break popular services like Amazon Prime and Google Maps. The groups have already spent $72 million on ads this year, according to an analysis from the ad tracking firm AdImpact. Nearly half of that money was spent in June alone.

“Spending $72 million is a drop in the bucket,” said Rep. David N. Cicilline (D-R.I.), who authored the House legislation and led a bipartisan investigation into the companies. “These companies have billions and billions of reasons to oppose the legislation and maintain the status quo.”

The focus on Schumer has intensified after the segment on Oliver’s show, which is known for bringing mainstream attention to complex policy issues. In the segment, Oliver zeroed in on Schumer particularly, noting that he has not yet brought the bills for a floor vote. He also mentions previous media reports that show that 17 members of Congress have children who work or recently have worked at large tech companies, including Schumer’s daughters who work as a marketing manager at Meta and a registered lobbyist for Amazon.

Yet there are key holdouts in both parties. Though two key tech antitrust bills passed through committee earlier this year with strong bipartisan support, members of both parties indicated they had outstanding concerns that would need to be addressed before a floor vote. Schumer’s resolve to pass them is in question amid a bevy of competing priorities.

The clock is ticking. The legislation has support from the left, right and center, a rare alliance that will likely dissolve after the midterm elections, said William E. Kovacic, former Republican chair of Federal Trade Commission and a professor at George Washington University Law School who studies antitrust and competition.

“Simply put, this may be the best chance the advocates of new legislation ever get to realize their aims for reform,” Kovacic said.

For more than three years, through a pandemic, two impeachments and an insurrection, lawmakers and their staffs have systematically collected evidence that Amazon, Apple, Google and Facebook engaged in anticompetitive tactics to solidify their dominance across the internet. They’ve hosted high-profile hearings with the companies’ CEOs, and pushed bills through House and Senate committees with bipartisan votes. And they heard from the CEOs of smaller tech firms, including Sonos, Spotify, and Tile, who testified that the giants had leveraged the power of their platforms to give their own apps and products unfair advantages over independent rivals.

The congressional probe found that the four companies control essential portals to the digital economy — and increasingly use those platforms to offer their own products and features, competing with the same businesses that rely on them. Critics say that’s a glaring conflict of interest; the tech giants say it’s for their customers’ own good.

The Technology 202: Here are seven takeaways from the House’s sweeping report concluding Silicon Valley is too powerful

Breaking up the companies isn’t on the table in the current antitrust package, which focuses on regulating tech companies’ treatment of rivals. Still, the bills mark the closest Washington has yet come to comprehensive regulation of a U.S. tech industry that includes four of the world’s five most valuable publicly traded companies.

The key bills — the American Innovation and Choice Online Act and the Open App Markets Act — have been languishing in Congress for months, and their chances of becoming law grow dimmer the closer Congress gets to the midterms, when lawmakers’ attention will turn to campaigning. Democrats risk losing control of Congress in that election, and significant tech antitrust bills are viewed as unlikely to pass under Republican leadership.

In an interview Friday, Cicilline said it’s “very important” that the legislation comes to a floor vote before Congress leaves for its August recess.

“Every day we wait, we are doing significant harm to the ability of small businesses to survive,” Cicilline said.

The legislation’s supporters are up against a host of competing political priorities, as Democrats and the Biden administration scramble to address gun control, inflation, climate policy and the Supreme Court’s reversal of Roe v. Wade.

Cicilline says that lawmakers have the votes to pass the legislation, and the tech executives’ recent visits to Washington reflect how worried they are. Pichai also met with Sen. Dianne Feinstein (D-Calif.), who had previously raised concerns that the bills would single out companies in her home state. He also met with Republican lawmakers including Senate Minority Leader Mitch McConnell (R-Ky.), Senate minority whip John Thune (R-S.D.) and Sen. Steve Daines (R-Mont.), said multiple people familiar with the matter who spoke on the condition of anonymity. Representatives for McConnell, Daines and Thune did not respond to a request for comment.

In meetings with Republican lawmakers, Pichai warned that the antitrust bills would be bad for innovation. However, the conservative lawmakers were focused on accusations that the company’s email system is politically biased. Pichai also discussed the company’s interest in federal privacy legislation and a key chip subsidies bill, one person said.

“We regularly engage with lawmakers and regulators on a range of issues and to be helpful with their efforts around economic growth, small business support, immigration, cybersecurity, and protecting online information, among other issues,” José Castañeda, a Google spokesman said in a statement.

He also said that the company does not filter email based on political affiliation and said that it was working to increase transparency data about bulk sending.

A multimillion-dollar campaign is pushing Dems to ditch antitrust reform

Industry groups are pushing the message to policymakers that tech regulation is not a top priority for voters in the 2022 political environment. Chamber of Progress, a left-leaning group funded by Amazon, Apple and Google, has distributed polling to congressional offices that suggests voters in key battleground states like Arizona and Nevada see tech regulation as a significantly lower priority than taming inflation or protecting the border.

The groups have also targeted their ad blitz in states where Democrats face key elections, including Georgia, Nevada, Arizona and Colorado, according to the AdImpact data. The ads play on Americans’ concerns about inflation, and suggest that the legislation could break Amazon Prime’s guarantee of 2-day delivery and bust services that Google offers free.

“Families are getting squeezed by rising prices, and now Congress is considering a bill that could make things worse for millions of Americans,” says an ad from the Computer and Communications Industry Association, which is backed by Amazon, Apple, Facebook and Google. The ads then urge people to call their senators to press them to vote “no” on the antitrust measure.

Cicilline argues that by creating more competition, the legislation would help address the economic conditions contributing to inflation.

Industry groups have also sought to torpedo the bills by playing on partisan divisions over tech regulation. The Chamber of Progress is running digital ads suggesting that the antitrust legislation would make it harder for companies to remove violence and misinformation. The ads link to a petition that asserts the bill could prohibit Amazon from taking down anti-vaccine documentaries or could have stopped Apple from booting Parler from the App Store in the wake of the Jan. 6 insurrection.

Cicilline called these arguments “completely false,” saying there is nothing in the bill that would prevent companies from upholding standards for content across their services.

Tech groups and executives have also sought to shift the focus to privacy rather than competition policy, especially after a trio of key lawmakers reached a deal on privacy legislation. Netchoice, an industry trade group with funding from Google and Facebook, has been telling lawmakers that privacy is a bigger priority for voters than antitrust, said spokesman Rob Winterton. During his recent visit to Washington, Cook sent a letter to lawmakers urging them to “advance comprehensive privacy legislation as soon as possible.”

The pro-regulation groups have also been spending — through far less than their Big Tech counterparts.

The Fight for the Future trucks broadcasting John Oliver around New York and Washington cost about $30,000 The Tech Oversight Project says it will spend about $250,000 by the end of June on ads supporting the legislation, also targeting states where Democrats face challenging races in the fall.

A coalition of smaller tech companies, civil society groups and nonprofits have launched their own response, pressing lawmakers to swiftly move on the legislation ahead of the midterms. That included last-minute trips to Capitol Hill by the CEOs of Kelkoo, a European price comparison site, and Proton AG, a Swiss-based company that provides an encrypted email service.

Proton CEO Andy Yen, who made his first trip to Capitol Hill as CEO to lobby in favor of the bills last week, said the policy debate has long been “dominated by the big tech companies.”

“The fact that there are so few voices other than big tech in D.C. is a clear symptom of the disease that we’re trying to cure here,” he said.