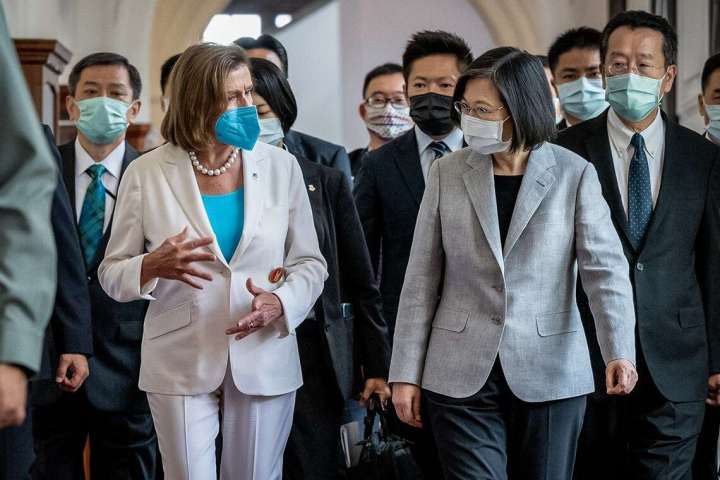 The visit lasted barely 19 hours. But Nancy Pelosi’s contentious trip to Taiwan was a defining moment in the increasingly bitter rivalry between China and the United States.

A fuller picture of the Chinese response will emerge over the coming weeks and months, and there are already signs it will encompass greater economic as well as military coercion. Whatever the final shape of Beijing’s retaliation, Pelosi’s visit heralds a new phase in China’s efforts to control Taiwan’s fate — and those measures are likely to increase the risk of conflict with U.S. forces in the western Pacific.

Meeting on Wednesday with Taiwanese President Tsai Ing-wen, Pelosi (D-Calif.) said the United States would not abandon Taiwan. “Now more than ever, American solidarity with Taiwan is crucial,” she said, describing a world facing a choice between democracy and autocracy. She said the American commitment to preserving Taiwan’s democracy was “ironclad,” although, in keeping with Washington’s approach of strategic ambiguity, she stopped short of pledging that the United States would defend the island militarily.

Taiwan has never been part of the People’s Republic of China, yet the ruling Communist Party in Beijing asserts sovereignty over the democratically governed island of 23 million and has threatened to seize it by force if necessary. The United States has long espoused a one-China policy, which recognizes Beijing and acknowledges its claims over Taiwan without endorsing them, while maintaining informal ties with Taipei.

China has sought to isolate Taiwan diplomatically and bristles at exchanges between Taipei and foreign officials — especially ones as high-profile as Pelosi. It worries that the California Democrat’s presence will normalize such visits and embolden U.S. allies to solidify their own unofficial ties with Taipei. Indeed, when asked by a reporter in Taipei whether her trip could pave the way for other visits by U.S. lawmakers, Pelosi said, “I certainly hope so.”

As more countries engage with Taiwan, raising its global profile, Beijing loses control over the long-standing question of how to treat the island, a de facto nation that is recognized by only a handful of countries as a result of Beijing’s aggressive lobbying. For the Chinese leadership — under which “reunifying” Taiwan with the motherland is a core part of party ideology — that is infuriating.

Pelosi’s visit was the first to Taiwan by a House speaker since Newt Gingrich (R-Ga.) in 1997. But back then, China was far less capable militarily and economically. Today, it is ruled with an iron fist by President Xi Jinping, who is determined to secure a third term at a party leadership conclave in the fall that would cement him as China’s most powerful leader since Mao Zedong.

Pelosi’s Taiwan trip a culmination of decades of challenging China

Xi moved assertively in recent years to crush the pro-democracy movement in Hong Kong and bring the financial hub more tightly under Beijing’s grip. But he has fewer options with Taiwan, and there is only so much he can do without starting a war that could backfire badly at a politically sensitive moment. And the Taiwanese, who struggled hard for their democracy after decades under martial law, have little desire to submit to Beijing’s authoritarian rule.

“China does not want direct conflict with the United States, and economically it is unlikely that China will cut ties. To be honest, China doesn’t have many cards in its hand,” said Chu Shulong, a professor of political science and international relations at Tsinghua University in Beijing.

So far, China has announced new trade sanctions against Taiwan, covering fruit, sand and fish. And its plans to conduct large-scale military exercises encircling the island over the coming days have ratcheted up tensions, leading Taiwanese officials on Wednesday to complain that Beijing was violating its territorial space with measures that amounted to an air and sea blockade.

The White House has sought to de-escalate, emphasizing its support for the status quo and insisting that there has been no change to U.S. policy on Taiwan while warning Beijing against an overreaction.

Those entreaties are unlikely to satisfy Xi, who has cultivated a hypernationalistic mood at home and is likely to feel compelled to respond forcefully to demonstrate Chinese resolve. That is what worries U.S. officials and others who fear that China’s retaliation could raise the risk of a military miscalculation with grave consequences, potentially drawing in other regional powers and U.S. allies such as Japan and Australia. The jolt to the global economy from a conflict in the Taiwan Strait would be enormous, given the volume of trade that passes through the adjacent South China Sea and the central role of Taiwan in the global electronics industry.

“If China plans to use force against Taiwan in the future, the sanctions they would face may be even more serious than those faced by Russia now,” said Fan Shih-ping, professor at the Graduate Institute of Political Science at National Taiwan Normal University. “The fact that Xi Jinping puts so much effort to interfere with Pelosi’s visit this time indicates that the Taiwan issue is no longer a problem that can be solved just between the two sides of the Taiwan Strait.”

China repeatedly condemned Pelosi’s visit and warned the United States against “playing with fire.” On Wednesday, as Pelosi prepared to depart Taipei, the Chinese Foreign Ministry said it would implement targeted countermeasures that would affect the United States and Taiwan.

Tsai, whom Beijing characterizes as a dangerous separatist, has stressed Taiwan’s preparedness for any Chinese military action. Chinese jets regularly buzz the skies around Taiwan, forcing the island’s air force to scramble its planes. Taipei “will not back down” in the face of heightened military threats from China, the Taiwanese leader said Wednesday.

And while Taiwan largely appeared to relish the attention from Pelosi’s visit — boosting its profile, a key aim of Tsai — it now faces the prospect of increasing intimidation from a Chinese leadership determined to get its way.

Asked at a news conference Wednesday what tangible benefits her trip had brought to offset the costs to Taiwan, Pelosi noted that the United States last week passed the Chips and Science Act, which she touted as enabling better economic exchanges and investments in manufacturing.

Lyric Li in Seoul and Vic Chiang in Taipei contributed to this report.