How Kansas became a bellwether for abortion rights 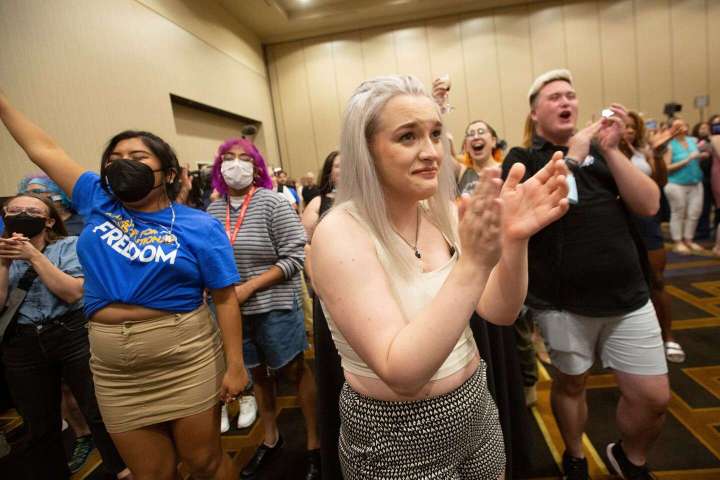 Somewhat surprisingly, Kansas voted Tuesday to protect a key safe haven for abortion in the Midwest.

On Tuesday, voters considered a ballot measure that, if it passed, would have allowed the state’s conservative legislature to enact a near-total ban on abortion. They rejected it by a huge margin of 58 percent to 41 percent, according to the Associated Press — and with surprisingly high Democratic turnout for a primary election.

This fight was the first of its kind after the overturning of Roe v. Wade, so advocates on both sides considered it a harbinger for whether ballot measures will help protect — or end — abortion rights across the country. People were also watching it for hints on whether the issue will energize voters in November, boosting Democrats’ chances in what has been shaping up to be a good midterm year for Republicans. Democrats got good news on that front.

Here’s what to know about it.

What the ballot measure said — and what it would have done

Abortion rights supporters argued that what the measure said and what it would do are two different things. The text of the ballot measure asked Kansans whether they wanted to repeal the state’s constitutional protection for abortion.

The limited opinion polling before the measure suggested that Kansans were closely divided on whether to keep or end abortion protections. Kansas is a red state, so many observers gave the edge to abortion opponents.

If the ballot measure had been approved, it would have allowed the Republican legislature to pass laws banning abortion. That’s a realistic outcome, given that Kansas Republicans have tried for years to do just that: They attempted to ban abortion in 2013, and in 2015, Kansas became the first state to ban a common procedure for second-trimester abortions. The state’s Supreme Court knocked that down, affirming Kansas’s constitutional right to an abortion in the process.

But if conservatives could change the state’s constitution, they could ban abortion, in line with the rest of the region. Even though Kansas has a Democratic governor, state Republicans have a supermajority in the legislature and can override her veto.

Supporters of the ballot initiative — aware that total abortion bans are unpopular, even among a sizable chunk of young Republican women — said that the amendment wouldn’t necessarily lead to a particular policy. They argued that the state shouldn’t be hemmed in by that 2019 decision by the state’s Supreme Court, which permits abortions until about 20 weeks.

In a post-Roe world, said supporters of the ballot initiative, the legislature should get to decide.

“Restore common-sense abortion limits,” an ad for the campaign said.

But opponents charged that the ballot initiative was really a gateway to banning abortion in Kansas.

It’s also unusual to have a statewide ballot measure in a primary, rather than a general election, when more voters turn out. Traditionally, only voters affiliated with a party can vote on primary day (though unaffiliated voters could vote on the ballot initiative). Abortion rights supporters pointed to this timing as evidence that the other side was quietly trying to ban abortion in the state.

And on the eve of the election, The Post’s Isaac Stanley-Becker reported, Kansans got text messages that said, confusingly, “Vote YES to protect women’s health.” A PAC led by a former Republican congressman was behind the campaign; abortion rights supporters called the effort deceptive.

What it would have meant for abortion access in the Midwest

If this ballot initiative had passed, it could soon have been nearly impossible to get an abortion in the region. In the month since the Supreme Court overturned Roe, most of the states bordering Kansas have either tried to ban abortion or succeeded: Missouri and Oklahoma almost immediately banned abortion; a third state, Nebraska, is trying to severely limit abortion. Kansas abortion providers said they were inundated with patients from as far away as Texas after that state’s six-week ban took effect in the fall.

As other states tighten their restrictions, abortion opponents have singled out Kansas as a “sanctuary” for abortion, reports The Post’s Annie Gowen.

How Kansas became the center of the U.S. abortion fight

Kansas has a history of being open to abortion rights. One of the country’s few third-trimester abortion providers operated out of Wichita before he was killed in 2009, NPR notes.

Republican lawmakers have tried for decades to restrict abortion as much as possible. But in 2019, their efforts to end second-trimester abortions backfired when the state Supreme Court ruled that Kansas’s constitution expressly provides a right for abortion. The constitution’s promise to “equal and inalienable natural rights” includes, the court said, “the ability to control one’s own body.”

With the ruling, the justices made it impossible for abortion opponents in Kansas to create legislation ending abortion rights without first changing the constitution. (By overturning Roe, the U.S. Supreme Court lifted only federal restrictions on abortion; it didn’t implement any in states.) Hence, this ballot initiative.

The post-Roe world has created a tangle of abortion laws and court fights that sometimes mean abortion restrictions change by the day.

More and more often, the left in particular has turned to ballot initiatives to advance policies without conservative state legislatures, on issues ranging from gun restrictions to the minimum wage to health care. In 2017, for example, voters in Maine overwhelmingly expanded Medicaid by ballot initiative, over the objection of the state’s Republican leaders.

But putting abortion proposals directly to voters is a relatively new political battle, so no one’s really sure how these fights are going to turn out. National opinion polls show that a majority of Americans want abortion protections and think total bans go too far, according to a Washington Post-Schar School poll. But Americans who support abortion rights also say they’re less motivated to vote in November.

So what happened in Kansas — which managed to hang on to abortion protections immediately after Roe fell and where voters turned out with huge margins to keep them — is seen as a bellwether for battles on abortion.