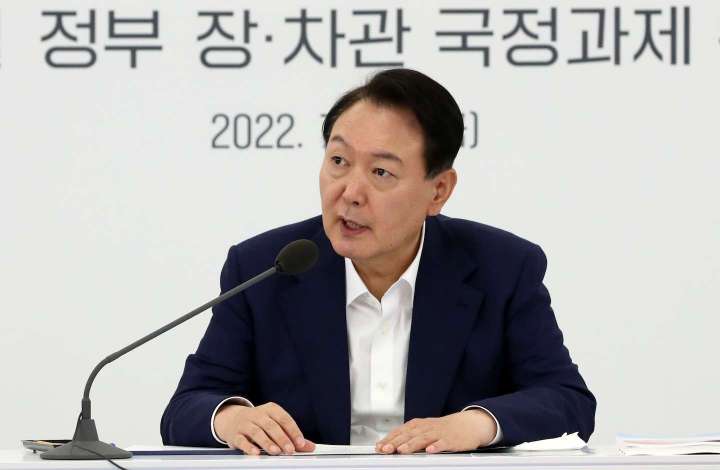 SEOUL — House Speaker Nancy Pelosi met leaders of Singapore, Malaysia and Taiwan in her closely watched tour this week — but not the South Korean president. The official reason: He was on a staycation.

Just before Pelosi (D-Calif.) arrived late Wednesday, President Yoon Suk-yeol attended a theater performance in Seoul and socialized at dinner and drinks with the actors. On Thursday, as Pelosi met with senior South Korean lawmakers, those photos went viral on social media.

Yoon’s decision sent South Korea’s presidential office scrambling to downplay accusations that he shunned a meeting with Pelosi in a bid to placate China, as South Korea navigates the rising competition between its largest trading partner and the United States, its biggest security ally.

The political novice, who won the presidency with the narrowest margin ever in South Korea, faces plummeting approval ratings less than three months after taking office. He has vowed to make his country a “global pivotal state” and a geopolitical force.

But his glaring absence on the global stage fired up critics, who accused the conservative South Korean president of deliberately shunning Pelosi out of concerns about retaliation from Beijing. Her controversial visit to Taiwan escalated tensions between the self-governing island and Beijing.

Yoon’s office said he scrapped his summer travel plans and opted for a Seoul staycation to plan for future political activities and rest at home.

Yoon’s spokesman, Choi Young-bum, said the president’s summer holiday was planned ahead of Pelosi’s Asia trip and that Yoon attended the theater performance before Pelosi’s plane arrived. According to Choi, Yoon said he was not available to meet Pelosi, who flew into South Korea that evening.

“I have received questions about whether the president avoided meeting with the House speaker because he was wary of China,” Choi said. “All these things are decided based on a thorough consideration of our country’s national interest.”

He also dismissed a reporter’s question suggesting that Yoon’s unavailability signaled a shift in Seoul’s alignment amid the U.S.-China rivalry, calling the question an “exaggeration.”

As Emhoff visits South Korea, gender and LGBTQ issues come to the fore

In place of an in-person meeting, the South Korean president and Pelosi spoke by phone late Thursday about strengthening the bilateral alliance and cooperating on regional security issues, according to a readout from Yoon’s office.

Yoon, who took office in May, pledged to “rebuild” the U.S.-South Korean alliance, which he said deteriorated under outgoing liberal president Moon Jae-in. The Moon administration sought to work with allies of North Korea, notably China, to help broker a peace deal with Pyongyang.

Pelosi is scheduled to fly to Japan late Thursday after visiting the heavily fortified demilitarized zone between South and North Korea. In their phone conversation, Yoon called her visit to the border area “a sign of a strong deterrence against North Korea,” his presidential office said.

Japanese Prime Minister Fumio Kishida is scheduled to meet with Pelosi on Friday on the final stop of her trip.