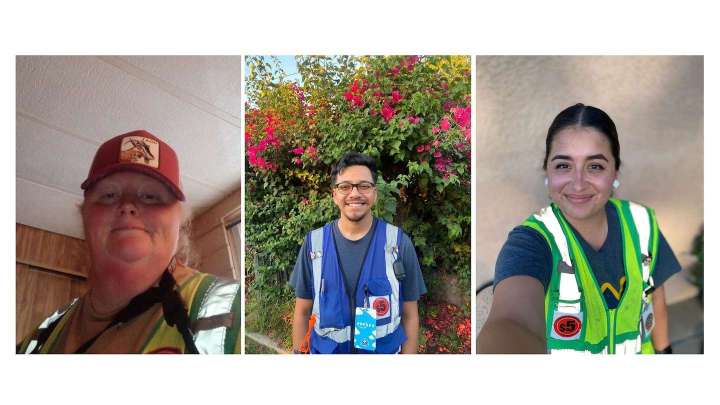 Dozens of Amazon employees at the company’s air hub in San Bernardino, Calif., on Monday abandoned their workstations mid-shift over low wages and concerns regarding heat safety.

The walkout in Southern California marks the first coordinated labor action in Amazon’s growing airfreight division, which uses Prime-branded planes to fly packages and goods around the country much like UPS or FedEx. The employees, who are independently organized, said they didn’t plan to return to work on Monday, in an effort to pressure Amazon to raise wages and improve safety.

Organizers said more than 150 people walked out Monday afternoon, and managers had already slowed some operations in anticipation of the action. While a small fraction of the 1,500 employees who work at the hub in various shifts walked out, such a work stoppage can create logistical headaches and disruptions.

Monday’s walkout is the latest sign that pro-union sentiment is spreading throughout Amazon’s ranks — this time at a uniquely vulnerable point in its logistics network. Amazon depends heavily on a few air hubs to keep millions of packages moving every day, which means the effect of a strike or work stoppage at any of those facilities would have a greater impact than a similar action at a regional warehouse.

Even as Amazon, the nation’s second-largest private employer, pits its weight against organized labor — trying, for example, to get the results of the Amazon Labor Union’s historic election victory in Staten Island thrown out — the walkout in California demonstrates how workers are continuing to independently organize around the country.

Anna Ortega, 23, said she hopes the San Bernardino walkout that she participated in forces Amazon to “stop and think about what they’re doing and why.”

“With the rising cost of everything in our lives, it’s getting tough to make ends meet,” said Ortega, who makes $17.30 an hour. “It doesn’t make any sense that people who work here should be on food stamps or struggling financially.”

Workers are also asking for better heat safety measures as the temperature has often reached above 100 degrees this summer, causing heat-related illness in particular for workers who are outdoors loading and unloading planes. Federal workplace health and safety officials have recently investigated the deaths of three Amazon workers in New Jersey and expanded a probe into safety issues at Amazon warehouses nationally.

“We appreciate and respect the direct relationship we have with our employees to discuss and address feedback,” said Amazon’s Flaningan before the walkout. “Through this open-door policy we have many communication channels we use, including All Hands meetings, which help us address employee concerns.”

Flaningan added that full-time employees at the San Bernardino hub and throughout the region have a minimum wage floor of $17 an hour and can earn up to $19.25 and receive health care, retirement benefits and up to 20 weeks of parental leave. Asked about the walkout Monday afternoon, Flaningan said the company respects the workers’ right to walk out.

The San Bernardino work stoppage is part of a broader wave of labor organizing campaigns across the country at Amazon warehouses — marked so far by a union election victory in Staten Island. Results at a warehouse in Bessemer, Ala., are too close to call, and they are being contested. A warehouse in Albany, N.Y., is also close to filing for a vote.

The coordinated work stoppage in San Bernardino is the culmination of months of organizing by an independent group of workers, which calls itself Inland Empire Amazon Workers United, that formed early this year. Workers said they have been meeting in air hub break rooms, workers’ homes, restaurants, and at a community center in San Bernardino in recent months to discuss working conditions.

The seeds for the group were planted this year during a facility-wide meeting when a handful of workers at the air hub spoke out and circulated a petition about the hardships caused by hundreds of dollars in lost pay for individual workers during unexpected holiday closures in late 2021.

In response, Amazon’s Flaningan said the company changed its global policy for temporary closures — limiting any impact to one unpaid shift per holiday period.

After months of organizing in and outside of the warehouse, the group delivered a petition to warehouse management in July with more than 800 signatures from workers at the facility. They demanded $5-an-hour pay increases and a series of smaller raises for workers with specific job titles and night shifts.

“We as Amazon Associates work hard to ensure that the building hits the numbers it strives for and work together in order to provide satisfaction to all of our customers,” the petition said. “[But] we can barely afford to live in today’s economy.”

According to the workers’ petition, the average rent in San Bernardino is $1,650 a month, which means full-time Amazon air hub workers earning a starting wage of $17 an hour must pay about 75 percent of their monthly income after taxes on rent. The legal minimum wage in California is $15 an hour; according to researchers at MIT, a living wage in the San Bernardino area would be closer to $18.10 for someone without children.

“We’re not making enough to save anything,” said Sara Fee, a lead organizer of Inland Empire Amazon Workers United who sorts packages at the air hub. “If something goes wrong with my car, I don’t have savings. I can’t afford to eat healthy food. I have to buy chicken nuggets or noodles.”

Four workers involved in organizing at the facility described grueling working conditions to The Washington Post. Two workers said they had experienced heat-induced nosebleeds this summer and another described hitting her head on a shipping container and getting a concussion.

“It’s been really hot every day this summer,” said Daniel Rivera, a leader of the walkout who unloads freight from aircraft. “They say there is air conditioning, but you can only feel it in some sections.”

Amazon’s Flaningan said the entire air hub campus has indoor AC, and that to date no heat-related illnesses have been reported from active loading areas.

Marc Wulfraat, an industry consultant who tracks Amazon’s facilities globally, said the air hub in San Bernardino is one of the most logistically significant in the nation for Amazon. The facility is a regional hub that funnels customers’ orders from across the country to outposts on the West Coast. Recent data shows that the facility oversees about seven flights a day to and from the East Coast, Midwest, Texas and the Pacific Northwest.

San Bernardino and neighboring Riverside County have more than 35 Amazon facilities. The company is the region’s largest private employer.

Air hubs are more significant to Amazon for entire regions, compared with one warehouse the company could route around in case of disruptions, Wulfraat said.

The workers at the San Bernardino air hub have received organizing assistance and space to hold meetings from local labor organizations, including the Warehouse Worker Resource Center and Teamsters Local 1932, but they prefer to remain independent.

Workers who walked out of the Amazon facility on Monday don’t have immediate plans to file for a union election with the National Labor Relations Board, but they said they would consider filing for a formal election in the future.

“Staten Island was absolutely inspiring,” Fee said. “Unionizing is not off the table for us.”