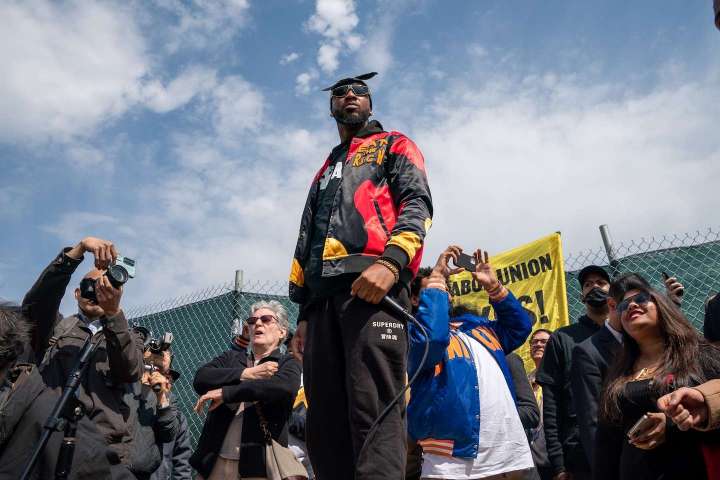 A coalition of top TikTok stars is pledging to cease all work with Amazon — including shutting down storefronts and halting new partnerships with the e-commerce platform — until the company meets the demands of the Amazon Labor Union.

Boasting a combined following of over 51 million, the group of 70 TikTok creators says that the campaign, called the “People Over Prime Pledge,” is designed to pressure Amazon to meet the requests of its workers, which include a $30 minimum wage, increased paid time off and halting activities the group considers “union busting.”

“Amazon’s widespread mistreatment of their workers and blatant use of union busting tactics will no longer be tolerated by the TikTok Community,” reads a statement from Gen Z For Change, an advocacy group that coordinated the pledge and works frequently with creators.

Amazon Labor Union did not help organize the People Over Prime Pledge. But interim union president Chris Smalls, who himself has over 178,000 followers on Twitter, said in a message that there’s a natural alignment between the pledge participants and Amazon Labor Union, which has used TikTok to gain popular support, regularly posting videos that garner hundreds of thousand of views.

“It’s a good fight to take on because Amazon definitely is afraid of how we used TikTok during our campaigns,” said Smalls.

Amazon did not immediately respond to a request for comment.

The campaign is a public setback for Amazon, which has sought to develop tighter relationships with young influencers in recent years. In 2017, the company launched the Amazon Influencer Program, allowing creators to earn revenue by recommending products in personalized Amazon storefronts. Earlier this year, Amazon flew more than a dozen Instagram, YouTube, and TikTok stars to a luxurious retreat in Mexico to encourage influencers to grow their presence on the platform. In June, Amazon built a massive VIP lounge at VidCon, an annual conference for online video stars, where influencers could learn about ways to work more closely with the company.

“I think their method of offering influencers life-changing payouts to make them feel as if they need to work with them while also refusing to pay their workers behind the scenes is extremely wrong,” said Emily Rayna Shaw, 24, a TikTok creator with 5.4 million followers who has partnered with Amazon in the past. “I want to feel comfortable recommending Amazon products to my community because it is so reliable, but I can’t do so until I know that they are treating their workers fairly.”

Many of the creators behind the People over Prime Pledge have done promotional deals with the company but plan to shut down their storefronts and decline future partnerships because of concerns over worker treatment. Creators who have worked with Amazon say that the company requires them to sign nondisparagement agreements, so that they can’t speak negatively about the platform even when the deals are over.

Amazon — which is the second-largest private employer in the U.S., where it has a higher rate of worker injuries than its competitors — has increasingly become a target for organized labor. In April, the independent Amazon Labor Union won an election at a large fulfillment center in Staten Island, marking a major union victory. Amazon workers are also organizing facilities in Bessemer, Ala.; Garner, N.C.; Albany, N.Y.; Campbellsville, Ky., and San Bernardino, Calif.

But the company has cracked down on these efforts, disciplining, firing, and even calling the police on some workers who show support for unions. The National Labor Relations Board has said some of the company’s conduct violates labor law, but the agency has limited resources to police a company of Amazon’s size. Even at the warehouse where Amazon Labor Union won the election, the company has successfully delayed the start of the contract-bargaining process, which itself could take months or years to complete.

Amazon could stymie unions for years by going to the courts

Jackie James, 19, a TikTok creator with 3.4 million followers said that she will not be doing deals with Amazon until they change their ways. “As an influencer, it’s important to choose the right companies to work with,” she said. “I don’t think that workers should be treated the way they are under Amazon.”

Yet as labor organizing efforts within Amazon have hit speed bumps — Amazon Labor Union lost a second election in Staten Island in May — the movement has remained high profile, attracting support from Sen. Bernie Sanders and President Biden. Amazon Labor Union president Chris Smalls appeared on a prominent Twitch stream last week, and the hashtag #hotlaborsummer has popped up on Twitter.

Amazon has previously denied discontent among its workers, arguing turnover is a function of the company’s flexibility. “A large percentage of people we hire are re-hires, showing that they will choose to work for us when they want to,” Kelly Nantel, an Amazon spokeswoman, told The Post in June. Amazon founder Jeff Bezos owns The Washington Post.

“We’re demanding that Amazon listen to their workers and make changes to provide a healthy workplace environment,” said Aidan Kohn-Murphy, founder of Gen Z For Change, who also posts on TikTok. “Until Amazon institutes these changes, we as creators will block Amazon from monetizing one of the largest social media platforms in the world.”

Aside from the Amazon campaign, TikTok has become a hub for pro-union advocacy, with many creators expressing support for the labor movement, in some cases aiding unionization efforts directly.

In February, after Starbucks attempted to hire non-unionized workers amid a union drive, TikTok creators working with Gen Z For Change sent over 140,000 false applications to the offending locations, posting videos about their efforts. In March, the same group of creators sent over 40,000 false applications to three Kroger grocery store locations that sought to hire non-unionized workers during a strike.

Hey @amazon, this is @genzforchange’s Strategy Team. Our team took down Starbucks job applications hiring union busting lawyers and scabs with 140,000 false apps. Then we did it again to support striking Kroger grocery workers.

We’ve got some fun things planned for you😇 pic.twitter.com/az6LjdKnnt

The influencers participating in the pledge reflect growing support for organized labor movements among young people. A recent Gallup poll found that approval of labor unions is at its highest point since 1965, with nearly four in five (77 percent) of adults ages 18 through 34 supporting them. In the past year, more young people on TikTok have expressed pro-labor sentiment, speaking out about fair pay and worker’s rights.

Duncan Joseph, a 19-year-old TikTok creator with 4.3 million followers, said he signed the pledge because, growing up in Seattle, he lived under the shadow of Amazon. He said his Gen Z peers rely on it heavily for online orders. He hopes that using his platform to speak out against the company’s behavior will help sway his followers to listen to Amazon workers. “One of our best tools is awareness and influence,” he said. “Making this public decision as an influencer will help the people who watch our videos understand what’s going on and how unfair Amazon’s practices are.”

Elise Joshi, 20, a TikTok creator and deputy executive director of Gen Z For Change, who is spearheading the People Over Prime Pledge, said that Smalls, who led the efforts to unionize an Amazon packing facility in Staten Island, inspired her to take action. “Ever since Chris Smalls went on the news popping that champagne bottle, we’ve been at the drawing board figuring out how we can support the unionization efforts by Amazon workers,” she said.

The influencers say TikTok is a particularly potent threat to the e-commerce giant because it is both where Gen Z users go for news and where narratives that eventually appear in legacy media are set. “TikTok is very powerful,” Joshi said. “It controls the narrative on issues, and Amazon knows that.”

She hopes that as the campaign grows it will pressure influencers to opt out of deals with Amazon, unless they address labor concerns. “If you’re making content for Amazon,” she said, “the hope is that there will be thousands of comments calling you out.”