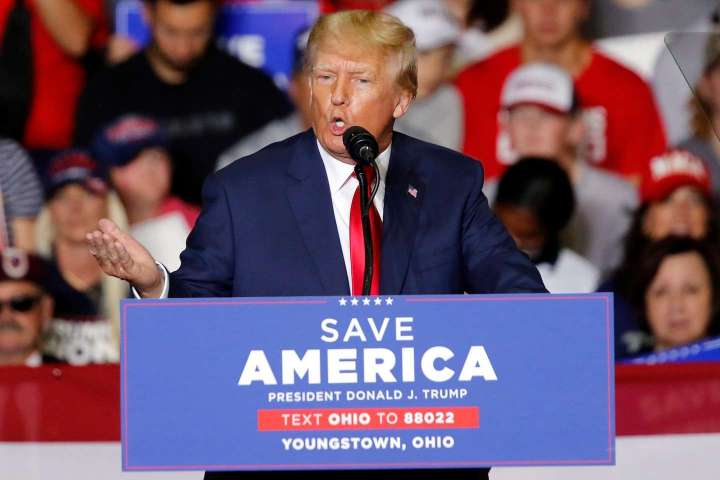 A new Donald Trump-backed super PAC was formed on Friday, as the former president seeks to exert more influence in November’s midterm contests ahead of a possible 2024 bid for the White House.

Importantly, the super PAC could also be used to hold in reserve cash for that bid that can’t currently finance a campaign of his own because it’s sitting in a leadership PAC, a type of committee barred from that sort of spending.

The super PAC is called Make America Great Again Inc., according to paperwork filed with the Federal Election Commission. It is the latest in a string of Trump-aligned committees to bear that name. It supplants Make America Great Again, Again!, which was registered last fall and has raised about $15 million and spent about $5 million.

Most of Trump’s fundraising since he left the Oval Office has benefited a leadership PAC called Save America, which has broad latitude in distributing funds, including to cover travel, pay advisers and, as numerous law enforcement investigations intensify, defray legal costs. One notable restriction is that such PACs can’t be used by candidates to finance their own political campaigns, meaning the money would have to be transferred out of the committee to power a new presidential campaign.

Trump has indicated he intends to make another run for the White House. He told conservative radio host Hugh Hewitt this month that a criminal indictment would be “no prohibition” against running.

He sought to beat back his legal problems using resources from Save America, which mostly raises money from small-dollar donors via email and text-message solicitations asking supporters to “fight” for Trump and defend his legacy. The PAC spent millions last month on legal consulting, according to a recent filing, including $3 million to the trust account of Critton, Luttier & Coleman of West Palm Beach.

Still, Save America is sitting on nearly $100 million. The PAC has so far sent only limited sums to Trump-favored candidates. Among those it has backed are former senator David Perdue (R-Ga.), who ran unsuccessfully in a primary to unseat the incumbent Republican governor of Georgia, Brian Kemp, and Harriet Hageman, who vanquished Rep. Liz Cheney (R-Wyo.) in that state’s primary last month.

The new super PAC is likely to be a vehicle to expand the former president’s financial footprint.

Staff on the new super PAC includes Taylor Budowich, a spokesman for Trump and a senior adviser on his 2020 campaign; Chris LaCivita, a longtime GOP consultant who ran one of the main pro-Trump super PACs in 2020; Meredith O’Rourke, a veteran Republican fundraiser; pollster Tony Fabrizio; and Sergio Gor, a former Capitol Hill aide who co-founded a conservative book publishing company. The press team includes Steven Cheung, who served in communications roles in Trump’s White House and on both of his previous presidential campaigns, and Alex Pfeiffer, a media strategist and former producer on Tucker Carlson’s Fox News show.

“President Trump is committed to saving America, and Make America Great Again, Inc. will ensure that is achieved at the ballot box in November and beyond,” Budowich said in a statement. Details of the super PAC were first reported by Politico.

Mike Murphy, a former top strategist to former Florida governor Jeb Bush, said he would expect a super PAC to be the destination for the massive sum at the disposal of Trump’s leadership committee. Given the rules about leadership PACs and the financing of one’s own campaign, that kind of transfer may prompt legal complaints, he said.

But perhaps the more vexing question, Murphy added, is what happens to the list of small-dollar donors cultivated by the leadership PAC, which will be of value to any future presidential campaign committee or a super PAC waiting for a campaign.

“The leadership PAC has a valuable list of small-dollar donors,” he said. “If I open up Trump for President, can I buy that list and re-solicit it? What is fair value? Really it’s something like a $2 million in-kind contribution, but there may be efforts to sell it for less. It’s a tricky business.”