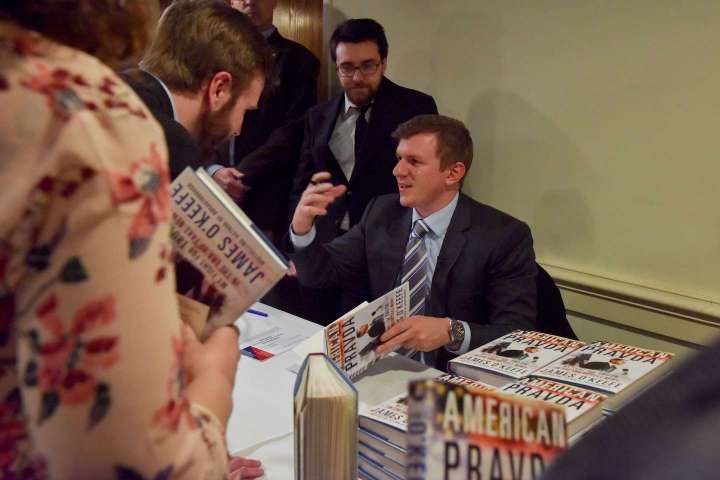 On Thursday evening, a jury in D.C.’s federal courthouse returned a verdict against Project Veritas in a case stemming from its 2016 efforts to infiltrate Democracy Partners, a progressive political consulting firm that assisted Hillary Clinton’s presidential campaign. The verdict, which included a damages award of $120,000, followed roughly a week of testimony in the case and one day of jury deliberations.

The verdict upends claims by attorneys for Project Veritas, the video-sting operation founded by James O’Keefe, that its four-part video series on Democracy Partners amounted to old-fashioned journalism.

“We thank the Jury for its decision and are deeply appreciative of the time and effort the members of the Jury devoted to consider our case,” Democracy Partners said in a statement. “Hopefully, the decision today will help to discourage Mr. O’Keefe and others from conducting these kind of political spy operations.”

At issue in the proceedings were two civil charges leveled by Democracy Partners in its 2017 suit — that Project Veritas engaged in unlawful wiretapping and fraudulent misrepresentation when it used false identities, bios and pretenses to earn the trust of Democracy Partners co-founder Robert Creamer and others. Project Veritas planted an intern — Allison Maass, who presented herself under the pseudonym “Angela Brandt” — in the firm’s offices, where she taped the goings-on from a camera attached to a button on her shirt.

Arguments in the case involved dueling descriptors: Democracy Partners claimed that Project Veritas, under O’Keefe, was orchestrating a “political spying operation” to assist candidate Donald Trump; Project Veritas said it was following in the grand tradition of American journalists who gather their news by going undercover. In his closing statement, Paul Calli, an attorney for Project Veritas, referenced the glory days of late “60 Minutes” correspondent Mike Wallace, once a virtuoso of undercover journalism and ambush interviews.

“Mike Wallace with his hidden camera,” said Calli, who said he could still hear the “tick-tick-tick” of the iconic “60 Minutes” clock. He didn’t mention that Wallace moved away from undercover tactics as his career matured. “I have no doubt that what we started has become a plague … we got caught up in the drama more than we caught up in going after the facts,” said Wallace in a 2006 CNN interview.

The reference to Wallace drives at the larger dynamic looming over Democracy Partners v. Project Veritas. If nothing else, the litigation exposed the unethical lengths to which O’Keefe’s organization will go to secure footage that explodes on the internet, as well as the growing gap between Project Veritas and traditional news organizations when it comes to clandestine reporting methods. Long before O’Keefe established Project Veritas in 2011, American journalists were falling out of love with undercover tactics — a breakup aided by Food Lion’s 1995 suit against ABC News for its clandestine exposé on the grocery behemoth’s unsavory meat-handling practices.

Mainstream outlets, accordingly, have spent the past couple of decades either swearing off undercover work or narrowing the circumstances when it’s warranted. “Undercover reporting can be a powerful tool,” wrote Greg Marx in CJR in 2010, “but it’s one to be used cautiously: against only the most important targets, and even then only when accompanied by solid traditional reporting.”

Meanwhile: Court documents and testimony show that Project Veritas, in putting together its four-part “Rigging the Election” video series on Democracy Partners, did the following:

· Offered cash bonuses to staffers to get certain content from the targets of the investigation;

· Gave a $20,000 donation to a progressive organization in order to “keep mouths watering” at Democracy Partners, in the testimony of a Project Veritas staffer;

· Crafted a voter-fraud scheme and proposed it to Creamer, co-founder of Democracy Partners.

That last one is a doozy. A Project Veritas representative — Daniel Sandini, doing business as “Charles Roth” — hatched an initiative in which operatives would register out-of-state residents and even undocumented immigrants by using employer IDs and addresses of foreclosed properties, according to court records and testimony. These folks would be “surrogate voters” who would make up for the multitudes who had been disenfranchised by voter ID laws.

Of course, it screamed voter fraud. Creamer never bit on the scheme and testified that he considered “Roth” “well-intentioned” but ignorant of voting laws. And here’s the kicker: Even though it was Project Veritas that advanced the idea, its lawyer hammered Democracy Partners at trial for not doing enough to distance themselves from “Roth” after fielding the “surrogate voter” idea.

Project Veritas must not have been spending enough time reading Poynter.org for ethics guidance. “Especially since the Food Lion misrepresentation and hidden-camera stuff, news organizations don’t do the ‘full Ginsburg’ ” of clandestine tactics, “where they put them all together at the same time,” says Lee Levine, a longtime First Amendment attorney. Contemporary examples of undercover stories are harder and harder to come by these days, says Levine — and even in the years when the practice was tapering off, he continues, news organizations that did embrace it were “very careful not to lie.”

Correct. Several years ago, Mother Jones decided that the best way to expose conditions in private prisons was to send in a writer to work as a guard. “My Four Months as a Private Prison Guard,” by Shane Bauer, highlighted the scandalous crevices of the industry and hauled in all kinds of awards. Just how did Mother Jones get Bauer into the Corrections Corporation of America facility? Here’s how: “Shane Bauer applied for a job with the Corrections Corporation of America. He used his own name and Social Security number, and he noted his employment with the Foundation for National Progress, the publisher of Mother Jones. He did not lie.” (Disclosure: The Erik Wemple Blog’s wife is a staff writer at Mother Jones.)

Maass, the Project Veritas plant in the Democracy Partners infiltration, presented a résumé for her assignment. Asked at trial whether it contained anything that was true, Maass responded, “No.” Like other Project Veritas staffers on the stand, Maass didn’t shrink from confirming the deceptive measures that fueled the infiltration — what Sandler termed a “web of lies conjured by Project Veritas.” In his closing statement, Calli embraced the ethos of undercover reporting, asserting that Project Veritas propagates “deceit, deception and dishonesty” so that the organization can “speak truth to power.”

The trial, however, wasn’t simply a week-long seminar on journalism ethics. It turned, in large part, on prosaic legal technicalities and the tense testimony of a former union official. Following the publication of the Project Veritas videos, AFSCME withdrew from financial arrangements with Creamer and associated organizations.

Since Democracy Partners sued for fraudulent misrepresentation and unlawful wiretapping — and not defamation resulting from the content of the videos themselves — it had to prove that the damages stemmed from Project Veritas’s pre-publication actions: the operations and tactics themselves, that is. Former AFSCME executive Scott Frey testified that the infiltration was indeed a factor in the decision to cut ties, though he also said, in questioning from Calli, that the video itself was a “major factor.”

That left an important judgment call in the hands of the jurors. Judging from the verdict, they viewed the infiltration as an actionable transgression itself. Too much fake-fake-fake.