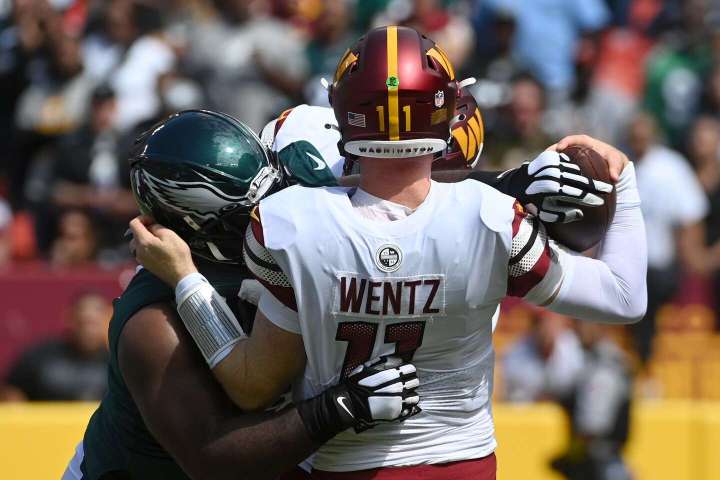 A look at the good (Hail!) and bad (Fail!) from the Washington Commanders’ 24-8 loss to the Philadelphia Eagles on Sunday.

Commanders defensive tackle and pending free agent Daron Payne continued his strong start to the season by tackling Eagles running back Boston Scott in the end zone early in the fourth quarter. The safety gave Washington its first points of the game. Speaking of safety, Eagles quarterback Jalen Hurts enjoyed an uneventful and hazard-free walk through the tunnel that leads to the visitors’ locker room after Sunday’s win. It was a far cry from Hurts’s last trip to Landover in January, when he was nearly taken out by a group of fans who tumbled to the ground after a railing near the tunnel collapsed.

A look at the newer, stronger railing that was put in place at FedEx Field after the old one collapsed in January and nearly hit Jalen Hurts. pic.twitter.com/1t9SliZ2QR

Commanders quarterback Carson Wentz was sacked a career-high nine times — one more than he endured as a member of the Eagles in Washington’s win over Philadelphia in the 2020 season opener and one shy of John Beck’s franchise record set in a 23-0 loss to the Buffalo Bills in 2011. (The Bills were originally credited with nine sacks in that game, but the official scorers changed the total to 10 three days later.) The Eagles, who became the first team since Washington in 2019 to register four sacks in the first quarter, finished with at least nine sacks for the eighth time in franchise history. Wentz shouldered some of the blame, acknowledging he has to do a better job getting rid of the ball in the face of pressure.

The Commanders put faith in Carson Wentz. Eventually he has to reward them.

During the first quarter, the Commanders announced they have narrowed the categories for their new mascot down to two. The winning mascot, which will be revealed at the team’s final home game of the season, will be either a hog or a dog. (Historical figure and superhero were eliminated as categories, which is good news.) Fans are invited to vote for the name of the hog or dog mascot online. The options include Boss, EZ, Lieutenant, Lil General, Major, Tuddy (cringe) and Winstan (please, no). A hog — which would be a nod to the franchise’s dominant offensive line from the ’80s and early ’90s — has seemed like the obvious pick since the team announced its search for a mascot earlier this year. It just so happens the Commanders plan to honor the original Hogs at the game when they announce the winning choice.

Eagles fans took over FedEx Field and made their presence felt — with hearty boos for Wentz — throughout the day. Earlier in the week, Philadelphia Coach Nick Sirianni challenged Eagles fans to make life difficult for the Commanders and said it would be a “deflating thing” if Washington was forced to use a silent cadence at home. “That would be pretty cool,” Sirianni said. Mission accomplished. Wide receiver Terry McLaurin said Washington was forced to change its snap count a few times.

Washington’s fourth-quarter safety cut the Eagles’ lead to 24-2, an unusual but not unprecedented score. Three NFL games have ended that way, including the New York Giants’ playoff win over the Atlanta Falcons on Jan. 8, 2012. Sunday’s 24-8 final, though not a scorigami, is even more rare. In fact, it had happened only once before, on Oct. 26, 1975, when the Houston Oilers defeated the Detroit Lions by that margin. Washington has still never scored exactly two points in a game.

While Wentz needs to work on not holding the ball for so long, Rivera has to improve his reaction time with the challenge flag. DeVonta Smith set up the Eagles’ first field goal with an incredible 45-yard catch along the sideline, but replays appeared to show the wide receiver got only one foot down in bounds. Rivera attempted to challenge the catch, but he didn’t throw his red flag on the field until after the Eagles had already snapped the ball on the ensuing play. “I needed to throw it sooner is the truth of the matter,” Rivera said after the game.

Hurts threw for 340 yards and three touchdowns, and Smith had eight catches for 169 yards and a score, so there weren’t many standout performances in Washington’s secondary. St-Juste was an exception. The second-year cornerback, who has lined up primarily in the slot this season, played outside opposite Kendall Fuller with regular starter William Jackson III inactive with a back injury. He responded with three tackles and three pass breakups.

The new smoke machines the Commanders debuted for pregame introductions were the extent of their offensive firepower for much of the day. Washington has been outscored 46-0 in the first half over its past two games after being outgained 322-50 through two quarters and taking a 24-0 deficit into halftime Sunday. Unlike last week, things didn’t improve much in the second half against the Eagles. Washington reached the red zone for the first time in the final minute of the third quarter, but the 15-play, 93-yard drive culminated in a turnover on downs after tight end Logan Thomas was stopped for no gain on a shovel pass on fourth and goal. The Commanders scored on only one of their three red-zone trips.