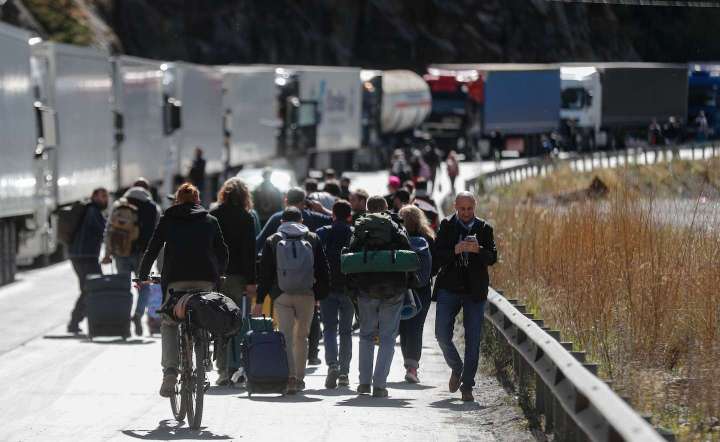 Western leaders, including President Biden, have denounced the staged referendums, which are illegal under Ukrainian and international law, as a “sham.”

Moscow does not fully control any of the four Ukrainian regions, either militarily or politically. And Russia’s war against Ukraine has taken another disastrous turn in recent days as Putin’s declaration of a partial military mobilization has led more than 180,000 people to flee the country to escape potential conscription, according to neighboring countries including Georgia, Kazakhstan, and Finland.

But Putin has signaled that upon annexation, he would consider any attack on Russian forces in those territories an attack on Russia itself, potentially justifying a ferocious response. Former Russian president Dmitry Medvedev on Tuesday reiterated recent threats that Russia could use a nuclear weapon.

“I have to remind you again — for those deaf who hear only themselves. Russia has the right to use nuclear weapons if necessary,” Medvedev wrote on his Telegram channel, adding a taunt that NATO countries would not intervene even if Russia used a nuclear weapon against Ukraine.

“The security of Washington, London, and Brussels is much more important for the North Atlantic alliance than the fate of a dying Ukraine, which no one needs,” wrote Medvedev, who is now deputy head of Russia’s security council. “Overseas and European demagogues are not going to perish in a nuclear apocalypse,” he added. “Therefore, they will swallow the use of any weapon in the current conflict.”

The referendums in many cases were carried out at gunpoint, with residents visited in their homes and forced to answer a single question about joining Russia.

A woman who lives in the city of Luhansk, the regional capital of the self-proclaimed Luhansk People’s Republic, which has been controlled by Kremlin proxies since 2014, said armed individuals had been going door to door and visiting businesses to collect ballots on which residents could check “yes” or “no” on joining Russia. The woman spoke to The Washington Post on the condition of anonymity for fear of reprisal.

Tuesday was announced as a day off — there was no school for children — and voting stations were set up around town for anyone who did not already get a chance to vote, the woman said. People were not asked for their passport data — just a name and address — which the woman said she suspected made the results easier to falsify. She said that some residents expected to be protected if they were part of a nuclear-armed Russia.

“People understand that everything has been decided,” the woman said. “They think that this will end something, because a ‘republic’ is easy to hit with all of the support of NATO. But people think it’ll be different if it’s Russia. I hear people saying that Ukraine doesn’t have nuclear weapons, and Ukraine won’t shell here anymore if we’re part of a country that does have one.”

Despite the obviously rigged nature of the vote, Russian officials insisted it was legitimate.

“Both by turnout and by the absence of serious violations, the referendums can be considered valid,” Sergey Tsekov, a former Ukrainian politician turned Russian senator from Crimea, which Moscow illegally annexed in 2014, told RIA Novosti. “The referendums were held in accordance with international norms, legislation, and can be recognized as legitimate.”

Tsekov also said that the Russian government was considering forming a new federal district that would serve as a governing umbrella for the Donetsk, Luhansk, Kherson and Zaporizhzhia regions. Russia currently has eight federal districts.

Ukrainian President Volodymyr Zelensky has said that Moscow’s referendums will not change his military’s defense of Ukrainian sovereign territory and he has pledged to recapture all occupied areas, including Crimea.

While Ukraine has agreed not to strike territorial Russia with U.S.-made weapons, U.S. officials have said that restriction would not apply to illegally-annexed territory. Ukrainian forces have regularly struck targets in Crimea, annexed by Russia in 2014, as well as in the northern Russian Belgorod region, which they can now reach with Ukraine’s own weapons following a successful offensive in northeast Kharkiv.

By early Tuesday, pro-Kremlin leaders in Luhansk had already declared the referendum “accomplished” and the leader of the separatist-controlled Luhansk People’s Republic, Leonid Pasechnik, said he hoped to travel to Moscow to present the Russian president a written request to absorb the territory.

Valentina Matvienko, the speaker of the Federation Council, the Russian parliament’s upper house, floated the possibility that lawmakers would ratify the annexation on Oct. 4.

With fears in Russia that Putin’s impending annexation announcement could be accompanied by a declaration of martial law, the exodus of fighting-age men trying to flee military mobilization appeared to be reaching critical levels on Tuesday. There were traffic jams and huge queues at border crossings.

Authorities of the North Ossetia region bordering Georgia, which has been one of the main transit hubs for Russians fleeing military mobilization, said Tuesday that they were considering declaring a state of emergency as thousands of cars lined up to cross the Verkhniy Lars checkpoint.

“The influx is too big, and no one expected it to be this massive,” the head of the region, Sergey Menyailo, said in a live interview on a social media channel run by Vladimir Soloviev, the Russian television presenter and Kremlin propagandist.

“We can’t close the passage to the republic, so we are trying to introduce an electronic queue specifically for cars,” Menyailo said. “But the issue is very complicated, and most likely, I will decide to introduce a partial state of emergency,” he added.

The North Ossetia branch of the Interior Ministry said it would set up a makeshift enlistment office next to the crossing.

“Russia’s leaders almost certainly hope that any accession announcement will be seen as a vindication of the ‘special military operation’ and will consolidate patriotic support for the conflict,” the British Defense Ministry said in its daily report on the Ukraine war. The ministry cautioned, however, that the chaos surrounding the “partial mobilization” that Putin declared last week would serve to undermine the Kremlin’s claims of success in the war effort.

In the latest sign of the botched mobilization, Sergei Nosov, the governor of the Magadan region in Russia’s Far East, announced Tuesday that the local military commissar had been dismissed after dozens of men were mistakenly summoned for duty despite being too old, or otherwise exempt.

Human rights groups reported that some Russians seeking to escape conscription have been turned back from border posts, citing decisions passed down from their local military commissariats banning departures from the country.

Georgia said it has bolstered the number of guards at the checkpoint but saw no reason to shut the border. Georgian Internal Affairs Minister Vakhtang Gomelauri said that about 10,000 Russians are arriving in the country every day, almost double the number compared to Sept. 21, when the mobilization was announced.

In Kazakhstan, another neighboring country that permits visa-free entry for Russian passport-holders, residents of the border city of Uralsk refurbished a movie theater into a temporary shelter for arriving Russians who couldn’t find a hotel room or apartment to rent.

Kazakh President Kassym-Jomart Tokayev said Tuesday that his country has an obligation to help the arriving Russians. The Kazakh Interior Ministry estimated that 98,000 people had arrived from Russia since the mobilization was announced on Sept. 21, and that 64,000 had already left for other destinations.

“In recent days, many people from Russia have been coming to us,” Tokayev said. “Most of them are forced to leave because of the current hopeless situation. We must take care of them and ensure their safety. This is a political and humanitarian issue.”

Underscoring a growing rift with the Kremlin over the invasion of Ukraine, the Kazakh leader also called for respect for territorial integrity, alluding to the annexation referendums. And he took an indirect swipe at Putin, who has been in power since 2000, saying that if just one person rules a country for years, “this does not do honor either to this country or its leader.”