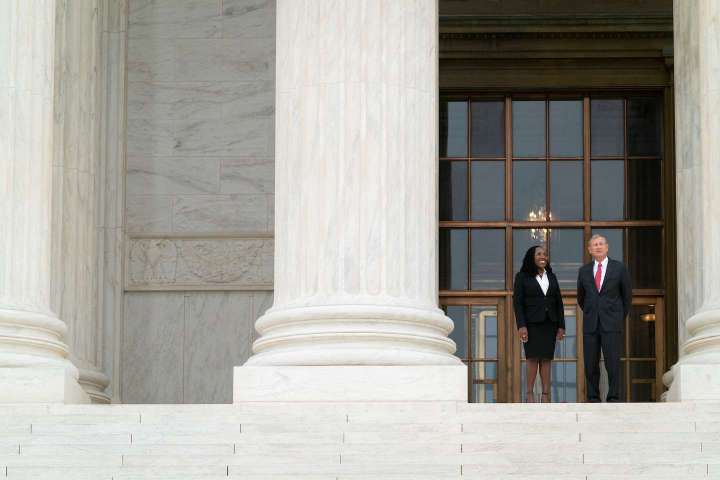 Justice Ketanji Brown Jackson received her official commission to the Supreme Court on Friday, in a tradition-laden ceremony that welcomed the court’s first African American woman.

Jackson, 52, has been on the job since late June. But the investiture ceremony marked the first time she has taken her place on the mahogany bench, in the newest justice’s traditional spot at the far left of Chief Justice John G. Roberts Jr.

Roberts wished her a long and happy career in their “common calling,” and President Biden and Vice President Harris, along with their spouses, were in the front row. They met privately with the justices before the ceremony, which started late and lasted only five minutes. The court’s new term begins Monday.

Supreme Court, dogged by questions of legitimacy, is ready to resume

Jackson, the 116th justice and only the sixth woman, awaited the oath in a chair used by Chief Justice John Marshall during the early-19th century. Behind her were her two daughters and her husband, Patrick, who wore socks that featured likenesses of his wife.

The packed courtroom contained relatives, fellow judges and some of the nation’s political leaders. House Speaker Nancy Pelosi (D-Calif.) was there, along with former House speaker Paul D. Ryan, a Republican who is related to Jackson by marriage.

How Ketanji Brown Jackson will recast the Supreme Court

Another only-in-Washington moment: Harris and her husband, Doug Emhoff, sat directly in front of Virginia Thomas, the wife of Justice Clarence Thomas, the court’s other Black member. Ginni Thomas testified Thursday before the House committee investigating the U.S. Capitol riot on Jan. 6, 2021, answering questions about her efforts contesting the election of Biden and Harris.

And Attorney General Merrick Garland officially presented Jackson’s commission. If the Republican-led Senate had acted when President Barack Obama nominated him for the Supreme Court in 2016, he might have been on the other side of the bench. Instead, the Senate left the seat open for the winner of the election, and President Donald Trump nominated Neil M. Gorsuch.

After the ceremony, Roberts accompanied the new justice down the Supreme Court’s famous marble steps, where crowds held up their phones to record a historic moment. The two did not speak to gathered reporters and photographers. Roberts left Jackson alone for a moment so photographers could get a picture of her by herself, and then Patrick Jackson joined her. The two kissed and held hands.

Jackson’s replacement of her mentor Justice Stephen G. Breyer will not change the court’s 6-to-3 conservative majority. But it has a dramatic effect on the court’s demographics. For the first time, the court will include four women, two Black justices and White men no longer will be in the majority.