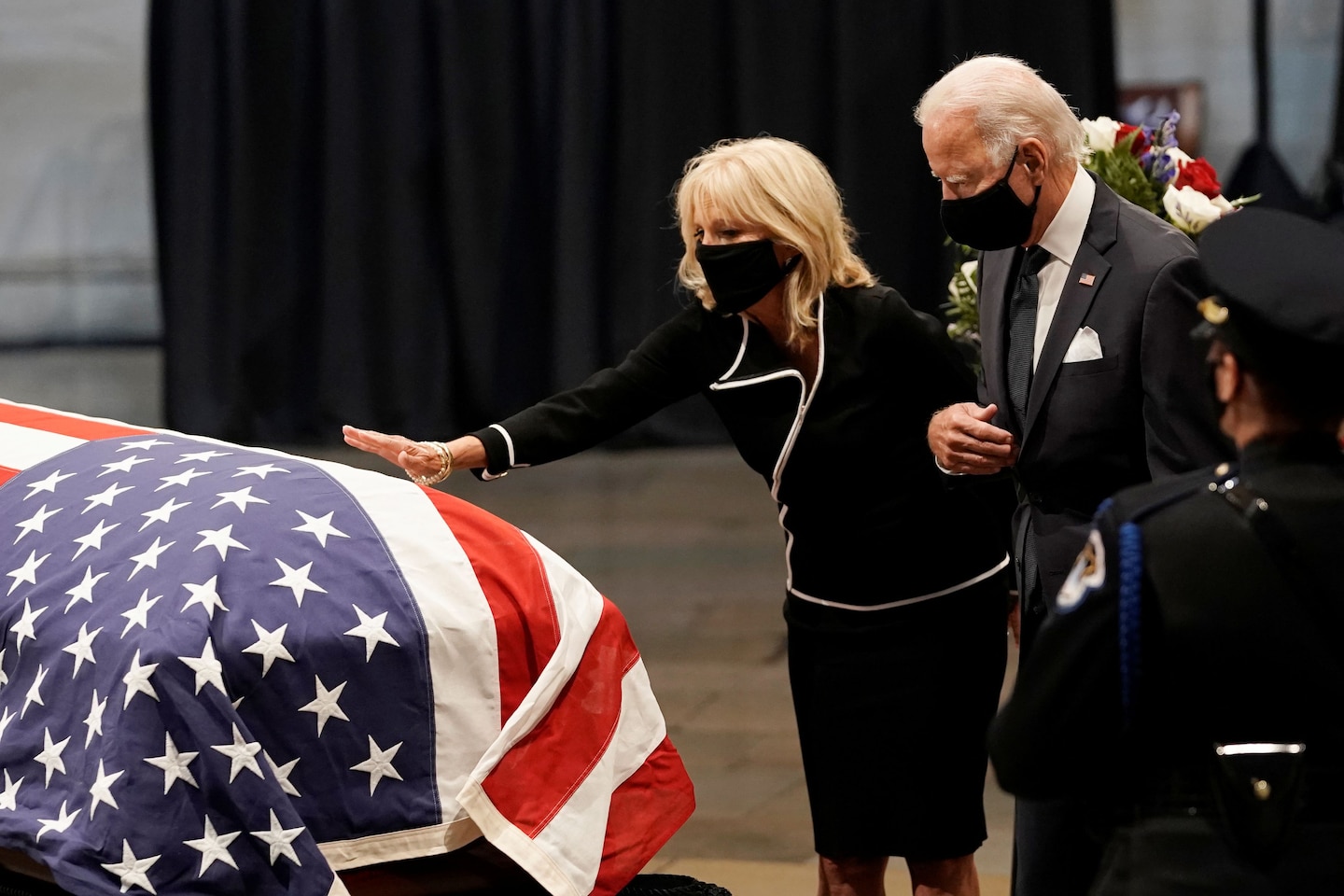 The presumptive Democratic presidential nominee and his wife, Jill Biden, visited Lewis as he lies in state at the U.S. Capitol. For the Bidens, the trip marked a rare public appearance outside their home state of Delaware, given the restrictions of the coronavirus pandemic.

The Bidens entered the Capitol Rotunda just before 5:30 p.m. and were escorted to the casket by House Speaker Nancy Pelosi (D-Calif.). They talked with Pelosi for almost 10 minutes, their first in-person meeting since Biden became the presumptive nominee and the pandemic upended political life.

The Bidens, both wearing black face masks, placed their right hands on Lewis’s casket, then Joe Biden made the sign of the cross and the two walked down the hall to Pelosi’s office. The former vice president did not join a meeting underway in the office between Democratic leaders and Trump administration officials on the latest coronavirus relief effort.

Biden’s visit marked a contrast with Trump, who said Monday that he did not intend to visit the Capitol to commemorate Lewis.

That contrast in some ways reflects the candidates’ differing attitudes toward the current racial justice protests. Lewis, a youthful leader of the 1960s civil rights movement who organized marches and endured beatings, has been cited by today’s activists as a forerunner and inspiration.

Biden has voiced support for the current protesters, while steering clear of some of their demands, such as defunding the police. Trump, however, has sharply criticized them, depicting many as bent on violence and destruction.

Biden’s travel came amid a busy period for his campaign, which on Sunday urged supporters to gear up for the 100-day stretch to the election. The Democrat has said he is hoping to choose a running mate by early August.

After leaving Pelosi’s office, Biden ran into a group of Democrats paying their respects to Lewis — including Bass, one of the lawmakers under consideration to be his running mate. Biden and Bass chatted amiably for a few minutes, as other dignitaries looked on.

Biden was asked about Bass and joked that he asked her to be his running mate and she had said no. Later, Bass walked out with Biden and Rep. Cedric L. Richmond (D-La.), a national co-chair of his campaign.

On top of choosing a running mate, Biden is also ramping up his efforts to win support in key states.

Biden’s campaign on Monday launched a $14.5 million advertising investment in Florida, Arizona, Wisconsin, Michigan, North Carolina and Pennsylvania, according to a memo issued by his campaign and obtained by The Washington Post. Trump won all six states in 2016, and they have been focal points of the Biden campaign’s commercials.

With two newly released ads, Biden is seeking to capitalize on eroding support for Trump among older voters. A minute-long TV spot features a woman talking about how her grandmother died after battling covid-19, the disease caused by the novel coronavirus. The woman argued that elderly people like her grandmother have not been priorities for the Trump administration.

As the coronavirus has become a dominant topic of debate in the race, the pandemic is limiting the candidates’ abilities to hold traditional events. Biden’s visit to the Capitol came amid tightening post-travel restrictions in Washington.

D.C. Mayor Muriel E. Bowser recently imposed new regulations for travel to and from “high-risk areas,” which include Delaware. A spokeswoman for the mayor suggested the regulations did not apply to Biden.

“Government activity is essential, and the Capitol of the United States is exempt from the Mayor’s Order,” Bowser press secretary Susana Castillo said in a statement.

Biden’s trip also put him in proximity to some of the other women he has been vetting as potential running mates. Several attended a ceremony paying tribute to Lewis in the Capitol hours before his arrival.

Sens. Kamala D. Harris (D-Calif.) and Elizabeth Warren (D-Mass.), along with Bass and Rep. Val Demings (D-Fla.) — all of whom have received consideration by the Biden campaign to join the ticket — attended the ceremony.

No former lawmakers were permitted to attend the socially distant service, so Biden, a former senator, was not on hand.

After the ceremony, the casket remained in the Rotunda, allowing Biden and other VIPs to visit.