The Biden administration has set out to dismantle Trump’s legacy, except in one area: Space 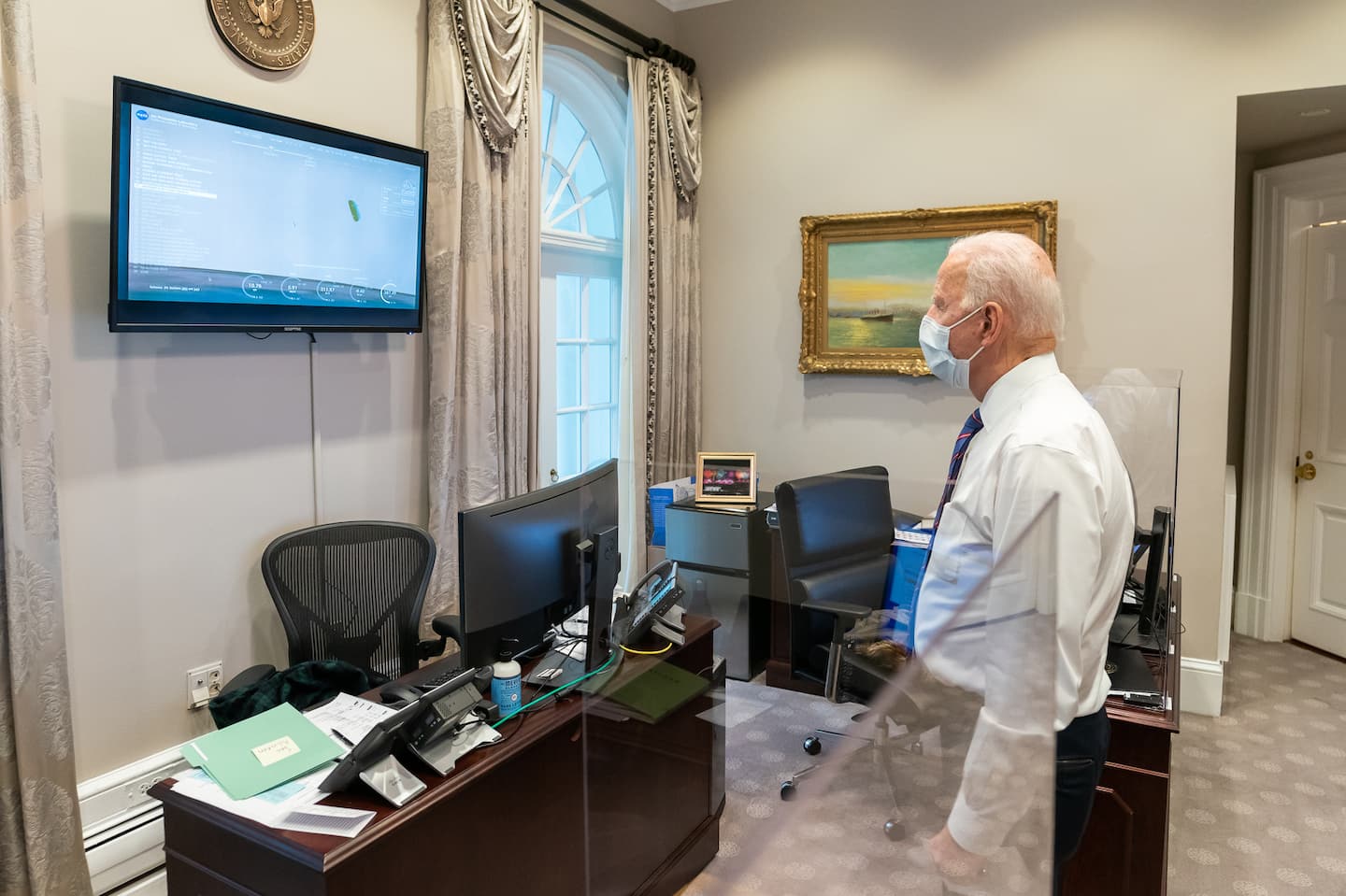 But there is one area of the former president’s policy that Biden has embraced: space.

The White House has announced support for two of Trump’s signature initiatives — the Artemis program, NASA’s effort to return astronauts to the lunar surface, and the Space Force, the sixth branch of the armed services.

The endorsement of the Artemis program means it will become the first major deep-space human exploration effort with funding to survive a change in presidents since Apollo, after several fitful efforts to send astronauts back to the moon and beyond ultimately went nowhere.

For decades, presidential administrations have pointed NASA at varying targets — the moon, Mars, even an asteroid — only to have the programs stall or be killed by new occupants of the White House. That has frustrated proponents of space exploration, tarnished NASA’s reputation and spawned lamentations that the Space Age’s golden era of the 1960s and ’70s will never be re-created.

The Trump administration embraced exploration and directed NASA to speed up its moon campaign, directing it to land another man, and the first woman, on the lunar surface by 2024. Despite its lobbying campaign, the White House did not receive the full funding, some $3.3 billion, it said it needed to meet that goal. But for the first time since Apollo, Congress last year appropriated nearly $1 billion for a spacecraft capable of flying astronauts to and from the lunar surface.

Last month, when asked about the program, White House press secretary Jen Psaki initially said she did not know what the Biden administration’s stance was. The next day she said the administration wholeheartedly embraced the program.

“I’m very excited about it now to tell my daughter all about it,” she said. “So for those of you who have not been following it as closely, through the Artemis program, the United States government will work with industry and international partners to send astronauts to the surface of moon — another man and a woman to the moon, which is very exciting — conduct new and exciting science, prepare for future missions to Mars and demonstrate America’s values.”

That position stands in stark contrast with those of previous administrations. During the presidency of George W. Bush, NASA was directed to go to the moon. Under Barack Obama, reaching an asteroid and Mars was the goal. Under Trump, it became the moon again.

The Apollo program was an aberration, successful in part because of the Cold War space race with the Soviet Union and in part because it became an untouchable program after President John F. Kennedy’s assassination. It became, as John Logsdon, professor emeritus at George Washington University’s Space Policy Institute, put it, “a memorial to a fallen young president.”

Though many in the space community thought the Trump administration’s goal to land astronauts on the moon by 2024 was impossible and politically motivated, it gave the program momentum. And many at NASA were worried that the Biden administration, which said virtually nothing about space during the campaign, would change course again, continuing a record often compared to the scene in the cartoon strip “Peanuts” when Lucy pulls the football away just as Charlie Brown is about to kick it.

Since coming into office, however, Biden has shown an interest in space. He installed a moon rock in the Oval Office, and the White House published a video of him watching NASA’s Perseverance rover landing on Mars last month. Afterward Biden called to congratulate Steve Jurczyk, NASA’s acting administrator, who has spent more than 30 years at the space agency.

Over the weekend, the White House released a video of Vice President Harris chatting with NASA astronaut Victor Glover, the first Black astronaut to live for an extended time aboard the International Space Station.

It is unclear whether the Biden administration will keep the National Space Council, which was resurrected by Trump and led, with great fanfare, by Vice President Mike Pence. The Biden administration has elevated the Office of Science and Technology Policy to a Cabinet-level agency, and many think it could become the coordinating body for space policy.

It is also unclear when the Biden administration will name a nominee for NASA administrator. Recently, Psaki said she could not confirm reports that former senator Bill Nelson of Florida was in the running or provide a timeline for when the White House might name someone, saying the question was “an interesting one.”

Whoever the administrator is, that person will be overseeing what has now become the first moon program with significant funding since the Apollo era. For that, NASA — accustomed to lurching in a different direction every time there is a national election — is grateful.

But the Biden administration’s endorsement of the Artemis program doesn’t mean it won’t put its own stamp on it.

NASA has created what Jurczyk called “an internal NASA team” to “take an independent look at the planning and provide feedback” to the agency’s leadership.

The 2024 goal “may no longer be feasible,” he said. “It was high-risk to start with, and it’s certainly high-risk now. So we need to take a look at it and lay out the most efficient and effective path forward for Artemis.”

There is support in Congress.

“I clearly want to keep building on what we’ve done already,” Rep. Don Beyer (D-Va.), the new chair of the House Science subcommittee on space and aeronautics, said in an interview. “The 2024 goal may have been a reach, so let’s see what we can do to get our moon landing back on track.”

And last month, 11 Democratic senators, including Colorado’s John Hickenlooper, the new head of Senate Commerce subcommittee on science and space, wrote to Biden, urging him to continue funding for the Artemis program.

“Major space exploration efforts have faced disruption as administrations have changed and priorities shifted,” the letter read. “It is now time for stability if the nation is to make progress on these initiatives. NASA has made significant progress through the Artemis Program and we strongly believe that those efforts should continue.”

How to catch up on Metroid, the classic series shunned by Nintendo