What Kavanaugh’s gun case concurrence does — and doesn’t — mean 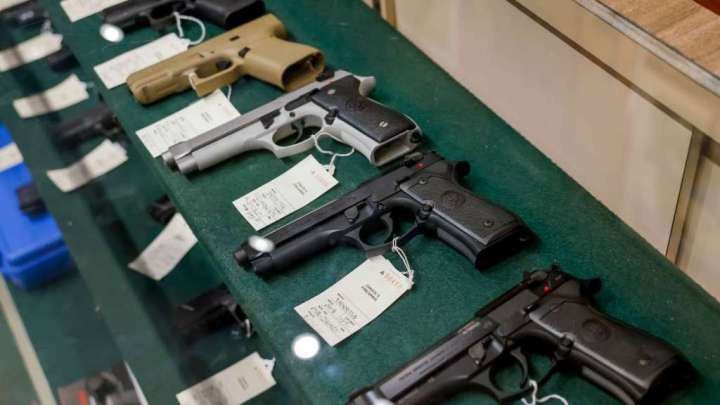 There is no question the expanded conservative majority on the Supreme Court has just delivered a significant setback to the gun-control effort.

The court in a 6-to-3 ruling Thursday struck down a New York law that requires those seeking a permit for carrying a handgun outside their homes to demonstrate a special need to do so. The ruling makes vulnerable similar laws in five other states.

But as the opinion was handed down, two conservative justices sought to emphasize one of the few limits the majority endorsed. The significance of that will be the subject of plenty of debate in the future — and in courts of law themselves.

In a concurrence, Justice Brett M. Kavanaugh was joined by Chief Justice John G. Roberts Jr. in underscoring that this ruling doesn’t mean states can’t impose more objective licensing requirements for carrying a concealed weapon. They explicitly stated that the ruling would have no impact on 43 other states, and that the six states at issue, including New York, could still restrict the practice if they align with the other 43:

The Court’s decision addresses only the unusual discretionary licensing regimes, known as “may-issue” regimes, that are employed by 6 States including New York.

By contrast, 43 States employ objective shall-issue licensing regimes. Those shall-issue regimes may require a license applicant to undergo fingerprinting, a background check, a mental health records check, and training in firearms handling and in laws regarding the use of force, among other possible requirements.

Going forward, therefore, the 43 States that employ objective shall-issue licensing regimes for carrying handguns for self-defense may continue to do so.

(Essentially “may-issue” laws allow more discretion about whether someone should be allowed to carry a gun, while “shall-issue” laws provide little or no discretion once someone meets basic requirements.)

While these words are in a concurrence and not in the opinion of the court, they could be construed as “controlling” — that is, restricting interpretations of the opinion.

That’s because Kavanaugh and Roberts form a necessary bloc when it comes to the six-justice majority. They could join with the three liberal justices in preventing the court from going further in striking down the laws in those 43 other states, which they emphasize remain valid. Kavanaugh’s concurrence also very notably re-ups the late Justice Antonin Scalia’s language from District of Columbia v. Heller, in which Scalia assured the Second Amendment was “neither a regulatory straitjacket nor a regulatory blank check.”

The middle of the court (such as it exists) aligning with Scalia will be pretty thin gruel for many gun-control activists. But there was some question about just how far the court might go on eliminating gun restrictions with its new 6-to-3 conservative majority. And Kavanaugh and Roberts appear to want to make sure everyone knows that, for now, the answer is “not that far.”

There is some disagreement about the practical significance of this concurrence.

For one, the two justices merely said that this particular decision doesn’t strike down the laws in those 43 states. But those laws could still be subject to review.

Another notable point is that while Kavanaugh and Roberts wrote what seems like a controlling or “pivotal concurrence,” they didn’t just concur in the overall judgment but also in the opinion itself. Some argued this undercuts how controlling their concurrence is.

Indeed, in some ways the concurrence could be seen as an effort to make it look like the court hasn’t gone to an extreme — which Roberts in particular has demonstrated acute concern about — when in fact the justices didn’t fight hard enough for that language to appear in the opinion itself.

But regardless, some experts argued the concurrence could be legally significant. University of Missouri law professor Tommy Bennett noted that lower courts often regard such controlling or “pivotal concurrences” as important in evaluating laws.

The reason, we found, is that lower courts are much more likely to pay attention to pivotal concurrences than they are to non-pivotal concurrences. That tendency is at its apex in salient, constitutional cases—ones just like Bruen. pic.twitter.com/v9EW8kJmrp

The key factor is just what Kavanaugh and Roberts say in their concurrence that doesn’t appear in the majority opinion.

Some on the right argued that the two justices were merely restating and adding emphasis to something Justice Clarence Thomas wrote in the opinion itself.

In a footnote, Thomas’s opinion states: “To be clear, nothing in our analysis should be interpreted to suggest the unconstitutionality of the 43 States’ ‘shall-issue’ licensing regimes.”

But Thomas’s opinion adds, “That said, because any permitting scheme can be put toward abusive ends, we do not rule out constitutional challenges to shall-issue regimes where, for example, lengthy wait times in processing license applications or exorbitant fees deny ordinary citizens their right to public carry.”

At the least, it’s a difference in emphasis — a footnote versus a concerted effort, in Kavanaugh’s words, “to underscore two important points about the limits of the Court’s decision.” Thomas’s opinion emphasizes that laws in those 43 states could still be reviewed and even suggests grounds on which they could be overturned, while Kavanaugh and Roberts suggest the six states might have some peace of mind that future, tailored gun restrictions could stand as long as they’re more in line with the 43.

The question is whether it’s a difference in emphasis for PR purposes or because Kavanaugh and Roberts are less comfortable with where the other four want to go in rolling back gun restrictions.

What seems pretty clear is that the future of gun rights in the United States will probably be determined by the two of them — and probably, more specifically, Kavanaugh.