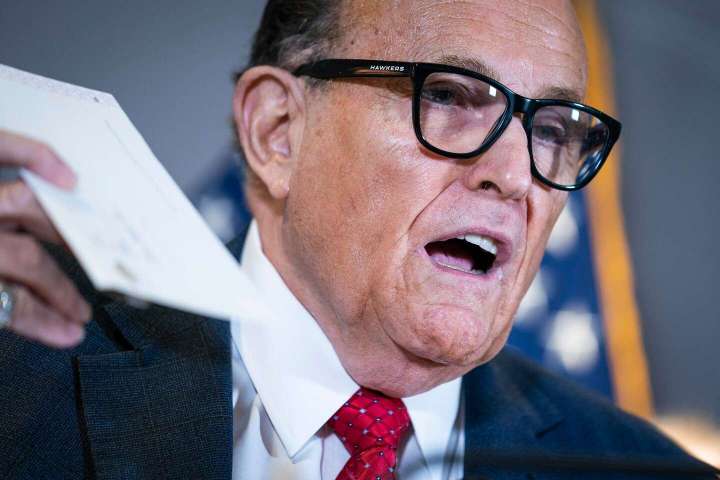 ATLANTA — Rudy Giuliani on Wednesday entered the Fulton County Courthouse, where he is expected to testify before a Georgia special grand jury as part of a criminal probe into efforts to overturn the 2020 election.

The former New York mayor, who was informed Monday that he is a target of the investigation, is the highest-profile member of Donald Trump’s inner circle to appear before grand jurors.

He moved past a crowd of reporters to enter the courthouse about 8:30 a.m., accompanied by his lawyer, Robert Costello. His expected testimony marks a victory for Fulton County District Attorney Fani Willis (D), who has faced challenges in recent weeks as her office has worked to hear under oath from elected public officials and other Trump allies.

Giuliani was one of the most committed and outspoken advocates for Trump’s false assertions about the 2020 election, claiming before Georgia lawmakers multiple times that he possessed evidence of widespread voter fraud. State election officials quickly debunked those claims.

Giuliani was subpoenaed July 5 alongside others involved in the Trump campaign who were active in spreading false claims, including lawyers John Eastman, Cleta Mitchell and Jenna Ellis. Sen. Lindsey O. Graham (R-S.C.), who called Georgia officials about the results, has also been subpoenaed, and a federal judge on Monday dismissed his efforts to avoid making an appearance.

Willis initially requested that Giuliani appearance as “a material witness.” On Monday, Giuliani’s lawyers were informed that his status had changed and that he was now considered a “target” of the ongoing inquiry, meaning he could be indicted if the investigation moves forward.

“We will provide alternate transportation including bus or train if your client maintains he is unable to fly,” her office wrote in an email to Giuliani’s lawyers. As Giuliani pressed for a delay, prosecutors filed a legal brief contending that he had traveled outside New York since his surgery and saying they had obtained records showing him paying cash for airline tickets for late July to Rome and Zurich.

Costello called the prosecutors’ claims “ludicrous,” adding that “Giuliani has not flown anywhere since his operation. He has not purchased these tickets and never purchased airline tickets for cash for any reason.”

The Fulton County Superior Court judge hearing the case, Robert McBurney, had postponed Giuliani’s appearance by a week but then rejected further requests for delay.

When he arrived at the courthouse, a local reporter asked the former mayor how he had traveled to Atlanta. “I’ll give you one answer,” he said, “I didn’t walk.”

For all the effort to get Giuliani to appear, it was unclear Tuesday whether the former New York mayor would provide any substantive information.

Costello said in an interview with The Washington Post that Giuliani plans to cite attorney-client privilege if asked about his interactions with the former president regarding the 2020 election. Giuliani could follow the example of other targets who have been subpoenaed in this case and declined to answer questions based on the constitutional protection against self-incrimination.

Giuliani has faced related questions from several other inquiries. He had his law license suspended in New York over debunked election fraud claims he made in Georgia and other states. He is among those being sued for defamation by Dominion Voting Systems.

He was subpoenaed to testify for several hours before the House committee investigating the Jan. 6 attack on the Capitol. That panel and an ongoing Justice Department inquiry have been scrutinizing the plan to send rival slates of presidential electors to Washington in advance of the congressional certification of the vote.

Being a subject of the special grand jury is not a direct indication that Giuliani will eventually be prosecuted by Willis’s office. Rather, the notice informs Giuliani’s lawyers that evidence gathered thus far by investigators indicates he may have broken the law in Georgia.

In the subpoena, Willis’s team cited Giuliani’s comments before a Georgia Senate hearing in which he provided testimony and evidence “purporting to demonstrate the existence of election fraud in multiple Georgia counties during the administration of the November 2020 election.”

The subpoena requested Giuliani’s appearance because he has “unique knowledge concerning communications between himself, former President Trump, the Trump Campaign, and other known and unknown individuals involved in the multistate, coordinated efforts to influence the results of the November 2020 election in Georgia and elsewhere.”

In announcing the scope of the inquiry in February 2021, Willis said her team would be examining “potential violations of Georgia law prohibiting the solicitation of election fraud,” the making of false statements to state government bodies, conspiracy and other matters.

Fulton County prosecutors have already questioned several state legislators about Giuliani’s statements before legislative panels in December 2020. During those meetings, Giuliani claimed illegal ballots had been surreptitiously stashed in suitcases under a tabulation table and that there was rampant underage voting in addition to security problems with voting machines and evidence of dead people voting.

Those claims were investigated by state officials and largely debunked.

Willis’s effort to pursue other Trump advisers continued Tuesday when a Colorado judge ordered Ellis to appear before the Fulton County special grand jury this month. The order issued by Colorado’s 8th District Judge Gregory Lammons followed efforts by Willis’s team in July to subpoena Ellis, who lives in Colorado, to appear before the grand jury.

Separately, lawyers for 11 of Georgia’s would-be Trump electors filed a motion Tuesday asking that Willis and her team be disqualified from investigating them — and perhaps from the entire investigation — for conducting what they say is a politically motivated prosecution.

The court filing cites the judge’s recent decision to disqualify Willis from investigating one would-be Trump elector — Republican state Sen. Burt Jones — after Willis hosted a fundraiser for Jones’s opponent in the upcoming lieutenant governor’s race. The judge called it a “what are you thinking moment.”

Lawyers for the 11 electors argued in their motion that the others are “inextricably intertwined” with Jones’s campaign and thus face the same “entirely reasonable concerns of politically motivated prosecution” that the judge found in disqualifying Willis from investigating Jones.

Willis’s office did not respond to a request for comment.